Dave “Beaky” Sims was 27 years old when his driver, two-time Formula 1 world champion Jim Clark, died in the Formula 2 car he prepared. Today, the veteran mechanic and team manager is better known as the silver-haired man behind Risi Competizione’s illustrious sports car operation, and at 76, he owns his years with pride.

Despite all he’s seen across six decades in motor racing, the shattering events of April 7, 1968, have never faded for the Briton. Clark, the Scottish farmer, was his era’s Lewis Hamilton and Mario Andretti combined in a devastatingly lithe frame. Effortless speed was his trademark as Clark’s gifts brought immense success in his primary home with grand prix racing, and his versatility – allied with supreme mechanical sympathy – earned trips to Victory Lane at the Indy 500 and numerous sports car events.

RELATED: Memories of Jimmy at the Brickyard

Regarded as the unassailable best by his rivals, the death of the world’s greatest driver in a rainy, second-tier Formula 2 round held at the Hockenheim circuit was simply incomprehensible.

Speaking just before the anniversary, Sims is transported back a half-century to a day where Team Lotus was represented by only four people at the track cut inside a German forest. Clark had Beaky (below, right) on his F2 car, 1962 F1 title-winner Graham Hill had Mike “Carnoustie” Gregory looking after his entry, and together, the young mechanics were wholly unprepared to process all that was about to take place. 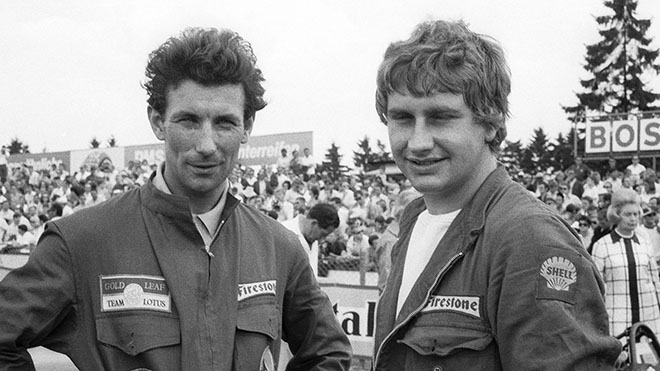 “When he went missing, we didn’t know,” Sims said. “Did he break down? The course car came around and [a track marshal] said, ‘Jim Clark mechanic, mechanic?’ I said, ‘What’s the problem?’ ‘Crash. Car crash.’ I said, ‘Oh.’ We got there, and I saw an ambulance, and then I was going – being young, ‘Is he OK?’ ‘Can’t say.’ Then I saw the car. I thought, oh… Nothing left of it. No gearbox and engine. Well, where is it? Where’s the engine and gearbox? Oh, through the woods. It scythed through the woods after he hit the tree obviously, and then the shock took in. I said, ‘Can I see him?’ He says, no.

“It was something that… it will never be forgotten in my head because I didn’t believe what I was seeing. You heard the stories about how ‘I don’t believe what I saw.’ Well, I didn’t. I thought, this is a bad dream. I can’t believe this is right. Where is he? I said, ‘Where is Jimmy?’ I looked at the car, and I said … what do I do? I was in shock. I didn’t know what shock was, but I certainly felt pale and a bit sick, nausea actually, and I thought, what do I do? Because the race was still going on.”

Unsure of the cause that led to Clark’s crash, Hill became Beaky’s immediate priority. Without Team Lotus owner Colin Chapman in attendance, the stately Englishman would step in and guide the junior mechanics in the aftermath.

“Graham was still going around, so I asked the marshal who took me in the pace car, ‘Can you call the pits and tell Michael Gregory the mechanic [to] tell Graham to come in? Please, in, in, in,'” he said. “They shortened the race, and then I was still [out] there. Then Graham came out and he says, ‘All right. OK, Beaky, what we’ve got to do, get the truck here, get it loaded.’ We got another team, a couple of mechanics to help load all the wreckage in, and Graham Hill was a god of organization, because what do I do? 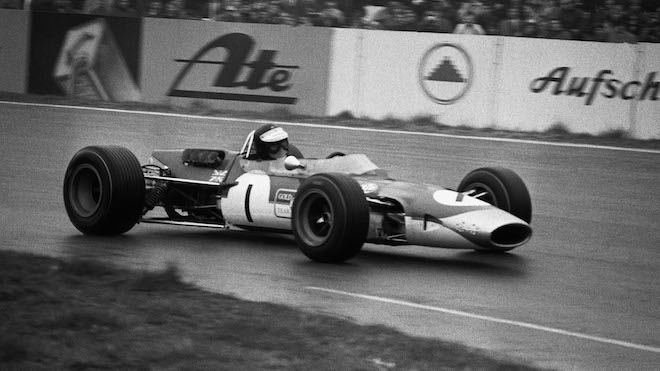 “Graham said, ‘OK, come and sit with me for five minutes, calm down.’ He said, ‘This is what we’re going to do. OK?’ And I just went under Graham’s directions, and we got all the stuff back into the truck and back to the paddock. He said, ‘Don’t open the truck to anybody,’ because it was all – it was just bits and pieces and stuff. He had to go and identify Jimmy. Someone had to identify someone who has died. Then me and Carnoustie, we went back to the hotel in the truck and then with the police. The police car said, ‘You can’t leave the place. You can’t leave Germany.’ Yeah, it was a law. Death. Yes. It’s murder, manslaughter.”

Stuck in a mounting nightmare, Sims boss arrived and briefly went on the warpath before an escape plan was hatched.

“Basically, Chapman arrived at one in the morning,” he continued. “We were still up, and he went and he said, ‘What the hell have you done?’ I said, ‘Jesus. It was a crash.’ He says, ‘Right. OK.’ Graham was there, and Graham told him to calm down. Let’s get this sorted. Chapman said, ‘Well, I want the truck out of here now.’ I said, ‘We can’t. The police car’s in front of it.’ He said, ‘I don’t care. We’ve got to get it out of Germany.’ A half an hour later, the little Volkswagen police car disappeared. It just went, so me and Carnoustie, [Chapman] jumped up and says, ‘Get going.’ We go, ‘OK.’ We said, ‘we’ll keep off the autobahns and go west. Go to the coast, make for Zeebrugge, Belgium.”

As the news of Clark’s death spread throughout Europe, making it to Zeebrugge on the Belgian coast to hire a boat that would transport the Team Lotus truck home to England should have been the first stretch of normalcy for the mechanics. Another morbid encounter followed.

“I said to Carnoustie, ‘We can’t do it.’ I opened the door, and I said, ‘That’s it. It’s just a mess. There’s nothing. There’s canvas covered over the car anyway.’ He took some [photos] and said, ‘Go, go, go.’ We got on the boat and we got there. The English police was waiting for us at [at the port]. They said, ‘No, we’re just escorting you [home] because there’s a lot of press and people going on.’ I had to stay outside of [the Lotus base at] Hethel for 48 hours–some law.

“But then we got it back in, unloaded it all. Chapman sent the engine to Cosworth, the gearbox to Hewland, and all the broken bits and pieces, whatever was left, went to Farnborough Aircraft and they found nothing cracked, all the bolts were still in the wishbones. Engine was good. It didn’t seize. Gearbox was nothing seized.”

The forensic approach in deconstructing Clark’s crash helped to absolve Sims of any negligence, but the investigation’s findings couldn’t spare him from the tabloids.

“The tires went to Firestone. That’s where the right rear deflation, they said, was the cause of the accident,” he explained. “Three days later, I went to work, and of course everybody was saying, ‘Am I the bad guy?’ Because certain British newspapers said, ‘Mechanic left bolts loose.’ Definitely there was bad media, but then they got over that and then I went in and Chapman called me in. 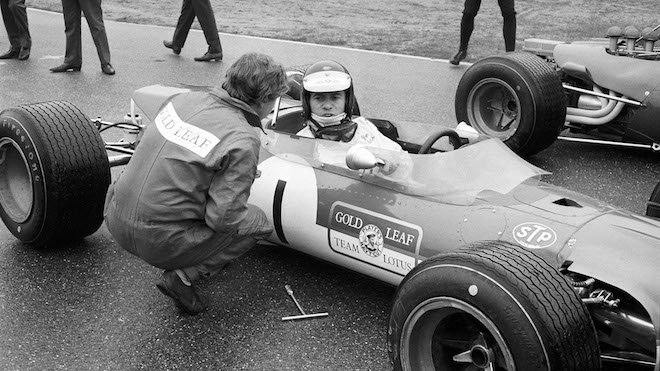 “I said, ‘Well, what do I do now?’ He said, ‘What do you mean, what are you going to do?’ I said, ‘Well, what do I do? I’m Jimmy’s mechanic on the car and he’s dead. What do I do?’ He said, ‘What do you do? You’re going to Jarama tomorrow, you and so-and-so, towing Graham’s new chassis down for the Grand Prix.’ He said, ‘You know, come on. Get your act together.’ I towed it down with another guy to Madrid the next day with a van, a van and a trailer. It was Graham’s spare car for the race.”

Chapman’s tough-love approach was countered by Sims’ fellow mechanics who recognized the shock had yet to fade.

“That was a big plus,” he added. “All the mechanics that were Jimmy’s mechanics long before I was in Formula 1, Indy cars, saloon cars, sports cars, guys – there was Bob Sparshott, Sid Carr, Dougie Bridge, and all the Kiwis and the Aussies. They were tremendous. That would’ve been the end of my career if it had gone the other way because to this day, I can’t really explain how I felt.”

At the time, Chapman’s call to get Beaky back out on the road proved to be a necessary tonic.

“I think if I’d have been side loaded and not traveling, I think I would’ve probably gone back to the garage as a mechanic,” he said. “But because some of the guys there had lost people before, they were really, really helpful to the point of, OK, let’s get on with it and you’re going tomorrow. Get home and have a bath. Get changed and be ready to go early in the morning. So-and-so’s got your Dover tickets and then this is where you’re going to, Jarama. You’ve never been there. You’ve got to do this, do that. All of a sudden, responsibility was back on and you were doing it, and your mind had to focus on that. Really, that really helped me. The guys were unbelievable.”

Always on the move, always something to do. Those searing memories from the forest to keep at bay. Considering all the world lost with Clark’s death, spare a though for his friend and mechanic whose mind is rarely far from Hockenheim. The downside of Chapman’s plan is that, after fifty years of mourning, Sims has yet to reconcile the events of April 7, 1968.