ISM Raceway president Bryan Sperber is an unabashed IndyCar fan. That detail is incredibly important as the Verizon IndyCar Series completes its three-year contract with the Phoenix oval, and from his perspective, his passion for open-wheel racing might not be the only thing that leads to a new agreement.

“I’ve been involved in motor racing my whole life, have a deep love for the sport, and a deep appreciation for history,” he told RACER. “And really, this track was built for IndyCar. We want to make it a success in the modern era, and we owe it to the fans to give it a shot and I’m really happy with some of the progress we’ve made with help from IndyCar.

“It isn’t 100 percent to where we want it to be, but if you look back two years to where we started, we’ve come a long way. If you walk out to the midway, it’s full, and with the tribute we’re doing for Mario Andretti’s last win in IndyCar here 25 years ago, there’s a real feeling of celebration that’s new for the event.”

Huge crowds are the norm for NASCAR’s visits to the Arizona track. IndyCar has yet to offer the same kind of foot traffic during its two previous races, but some of the business metrics behind the scenes have filled Sperber’s ISM staff with optimism.

“One of the track presidents at another venue that holds IndyCar races told me while we were considering bringing IndyCar back that there’s a different balance here than for other racing series,” he added. “It’s more of a corporate audience and more hospitality-driven. Our biggest suite, Curve, holds 300 people, and that’s completely sold out. 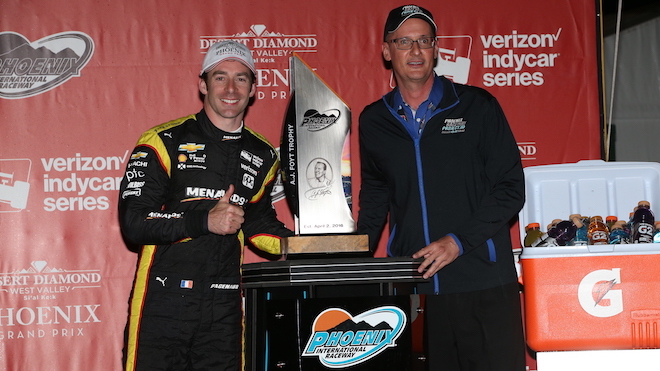 “We actually had to expand into the suite next to it to handle another 100 guests because of the demand. There’s a lot of demand here, but it’s a different, more corporate demand than NASCAR. Of course we’d like to expand the event with more ticket sales, and that’s a large priority, but we’re seeing other things that have us feeling good with IndyCar.”

It’s too early for Sperber to say whether a new multi-year contract will keep IndyCar at Phoenix for 2019 and beyond. It’s also rather encouraging to hear where he expects the conversation with IndyCar’s leadership to lead.

“IndyCar has been a great partner for us, they’re committed to being at ISM Raceway and we’re committed to making this a success,” he said. “We’ll get through this weekend, then sit down and discuss and evaluate what’s next, but my intention is for IndyCar to be here for a long, long time.”