Ed Jones’ debut for Chip Ganassi Racing was solid as the sophomore Verizon IndyCar Series driver improved from 17th on the starting grid to eighth at the checkered flag in St. Petersburg. The 2016 Indy Lights champion was fast and steady, moved forward throughout the race, and did so with the help of his new race engineer, Julian Robertson (pictured below).

Saturday night’s 250-mile run at ISM Raceway in Phoenix has all the makings of another strong outing for the 23-year-old. And with Robertson – CGR’s long-standing technical director – moving back into a direct engineering role with the No. 10 Honda piloted by Jones, plus the involvement of three-time Indy 500 winner Dario Franchitti, the potential contained within the entry is remarkable. 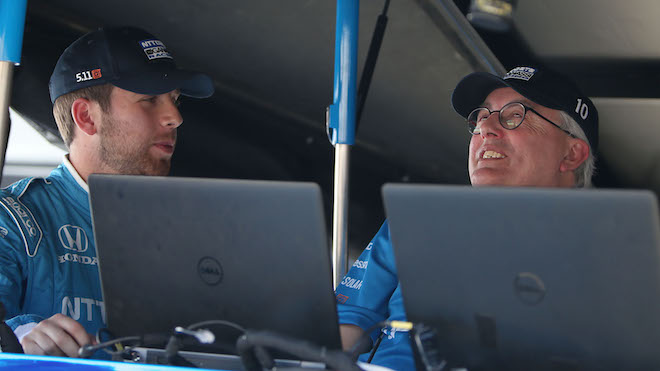 “It’s been great to work with Julian, and there’s a lot of great engineering support there with his assistant Brian, and then I’ve got Dario as well giving input from the driver’s perspective,” Jones told RACER. “Whenever you start working with a new engineer, you’re trying to give useful feedback, and Dario’s been very valuable with that to help me translate what I’m feeling and work with Julian and I to make a lot of progress very quickly. These are all new working relationships, and it’s come quite a long way in a short period of time, and it’s only getting better.”

With four-time champion Scott Dixon as a friendly resource in the sister No. 9 Honda, Jones has another pillar of CGR in his corner. If all goes well during IndyCar’s upcoming busy stretch of three races in three weeks, plus the rescheduled IMS speedway test, the team could have a consistent 1-2 punch on its hands.

“There’s a lot of things Scott does that I’m taking advantage of trying to learn from the inside as his teammate,” Jones added. “Obviously, the fuel saving is one thing; the fuel mileage he makes is quite an asset, and he does it without slowing down much. Going into the first race, we hadn’t worked together much, so now that we’re into the season, it’s ramped up a lot. We didn’t have much testing before the season, but we’ve seen our feedback is very similar, which can help the team. It makes testing and developing things go a lot faster. It’s gone well so far with Scott and hopefully we can grow more together.”