McLaren racing director Eric Boullier has warned his team not to get carried away with its result in the Australian Grand Prix as it still has a lot of ground to make up on the top three.

Having switched to Renault power units this season, McLaren outlined fellow Renault customer Red Bull as its benchmark following three difficult years with Honda. The opening race in Melbourne saw Fernando Alonso hold off Max Verstappen for fifth place while Stoffel Vandoorne scored points in ninth, but a Virtual Safety Car aided track position and the car was close to a second off the pace of the top three teams.

“The back-to-back races of Bahrain and China pose very different challenges, and, given that most of our personnel don’t travel back to the UK between them, both logistics and car development are two tricky issues that everyone needs to get on top of,” Boullier said.

“Speaking of car development, we’re working hard to bring updates to the next two grands prix, which we hope will help our boys continue to put up a good fight. As we saw in Melbourne, our competition is tough. We can’t take anything for granted and we know that despite a stronger performance than we’ve seen in recent months, we also benefited from circumstances around us.

“Our principal targets are further up the grid ahead of us, so we know there’s work to do and our focus is on the development race as well as the race on track. The result at Albert Park was a boost that we all needed, but now we must move on, look firmly ahead and keep pushing forward.”

Alonso agrees with Boullier’s assessment, saying McLaren needs to ensure it backs up its result in Melbourne over the coming two races. 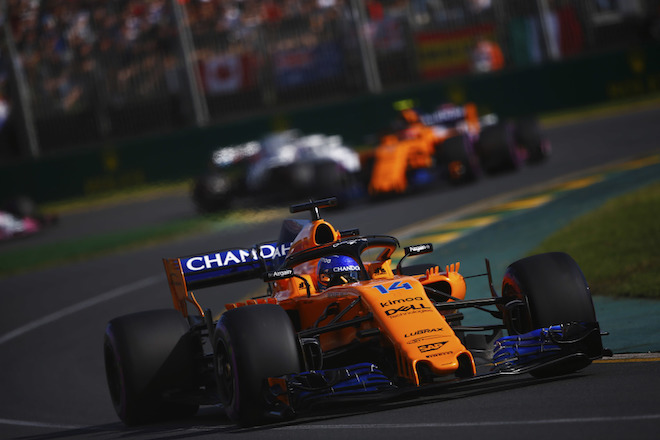 “After a positive start to the season I’m already really excited to head to Bahrain and get back in the car,” Alonso said. “Australia gave us a positive feeling and I hope we can continue that momentum as we head into these back-to-back races.

“I know the team are working hard back at the factory to push through the upgrades that are in the pipeline, as these, along with the development work we’re doing on the chassis and with the power unit, are what will be key to unlocking further performance from our car.

“We mustn’t get complacent – these two races in Bahrain and Shanghai are tough on the cars and it’s important that we maintain good reliability if we are to maximize our potential. The competition is very strong and we need to keep pushing forward for more points.”