After leading NBCSN’s Formula 1 coverage for many years, Leigh Diffey will make a full-time return to the IndyCar booth, where he’ll have the analysis and (occasionally comedic) insights of Townsend Bell and Paul Tracy to manage.

“What’s nice about our coverage is we’ve been very comfortable with it the past few years with Townsend and Paul and what they bring,” NBC Sports Group coordinating producer Rich O’Connor told RACER. “They have really been jelling together; that has happened naturally and they play off of each other quite easily. And how they work with Leigh; he’s very conversational and works well communicating to our pit lane team and the booth, so we’re pleased with how it all comes together.”

“We’re deep on pit lane with Marty and Kevin and Katie, and when Marty moves on to our NASCAR coverage, we have Jon who’s ready to step in,” O’Connor continued. “And then we always have Robin to chime in with his opinions and historical notes. We just try to have voices from different places and avoid having defined roles where only this item can come from the booth or pit lane. Good content should come from anywhere.”

IndyCar fans got a glimpse of new camera angles at the season opener in St. Petersburg, and with the anticipated speed and action on the one-mile ISM Raceway oval, O’Connor’s team will be tasked with switching between dozens of compelling viewpoints.

“It’s not a problem; it’s a challenge,” he said. “Jay Frye’s group at IndyCar, they were very motivated on where all the [in-car] camera placements should go. They’ve presented us with getting all of the good stuff on the air, and that’s why I’m fortunate wo work with Terry Lingner and Roger Vincent to use all of the toys while bringing the primary action home. Ultimately, we don’t force any of those in; we try to bring to best action and supplement it with all the bells and whistles.”

NBCSN will also bring forth two stylistic changes to its IndyCar presentations starting on Saturday.

“For the pre-race shows this year, I’m having Leigh, Townsend, and Paul host it from the grid,” O’Connor said. “In the past, we looked for beautiful places to position them and a desk, but this year, my thought was that I wanted them in the middle of the pit lane action. It might not be perfect, it might be noisy, but I want them where the cars are and I want more room for Townsend and Paul to express their opinions, so having them in with the pre-race show was the pace to do it.”

With the hit-and-miss nature of airing Robin Miller’s grid runs, his pre-race contributions will shift to featured stories crafted specifically for each event.

“I’m working with Robin on packages that will be in most, if not all of our events,” O’Connor added. “This weekend’s will be a feature on Sebastien Bourdais – a look at his career. After he won at St. Pete following his comeback from the Indy crash, we put that in motion with Robin right away.”

NBCSN will air 12 races this season, including the final nine as IndyCar crowns its newest champion in September at Sonoma Raceway. Once the 2018 season is complete, NBC and NBCSN will take over as IndyCar’s sole broadcast home as part of a three-year deal that was announced in March. 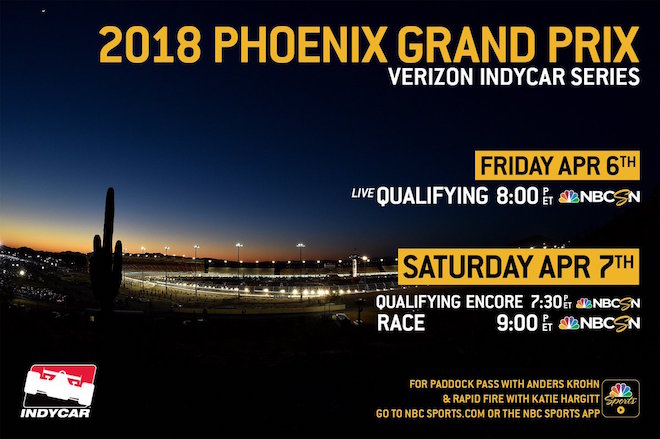