Racing’s cruel hammer has once again found a prototype owned by Spirit of Daytona and delivered a fatal blow. After stripping the No. 90 Cadillac DPi-V.R to the tub following Tristan Vautier’s heavy crash late in the Mobil 1 Twelve Hours of Sebring, inspections at Dallara’s U.S. base in Indiana confirmed SDR’s worst fears.

“We got it up there on Friday, and after a couple of days looking through everything this week, it looks like it’s done,” team owner Troy Flis told RACER. “It’s been a tough start to the season on sporting and commercial side.”

SDR’s IMSA WeatherTech SportsCar Championship effort got off to a fast start in Daytona, but the team was out of the race early after terminal engine problems struck the No. 90. The Florida-based crew was riding a high earlier this month at Sebring after Vautier took pole position (below) and was in a strong position as darkness fell, but a driving error pitched the DPi-V.R into the Turn 17 wall where extensive damage was suffered. 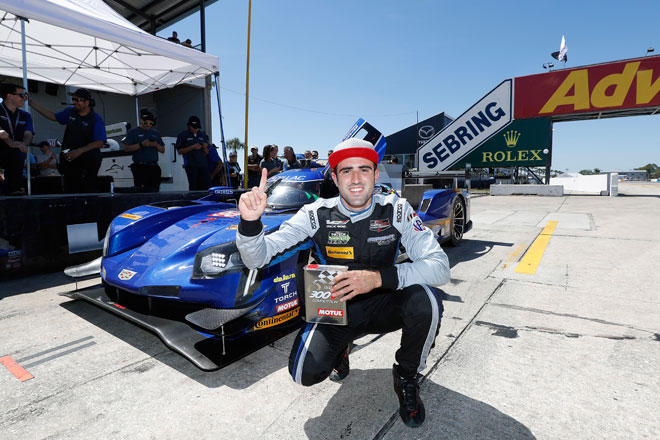 “The worst part’s been that this is some of the best I’ve ever had with crew and engineering and drivers, and we’ve taken two big shots that are hard to recover from,” Flis continued. “You can’t yell at the drivers for crashing when they’re going hard and pushing like Tristan was. The safety provided by the Cadillac in the crash was incredible; Tristan said he didn’t have a bruise on him after.

“But the roughest part has been commercially. We’d hoped to be a lot further along in that department by now, and all this damage, the replacement parts and the tub, couldn’t have come at a worse time.”

SDR went through a similar scenario in 2017 where its first Riley/Multimatic Mk. 30 tub was destroyed in a crash at Long Beach, and after a second hard crash at Detroit, the team’s resources were stretched as an eventual move to Ligier – it’s third chassis of the year – took place.

Just as getting the No. 90 Cadillac back on track is a priority for Flis, shoring up SDR’s sponsor portfolio has also been a heavy focus since Sebring. With the team’s previously announced plans to skip the next IMSA round at Long Beach, there should be enough time to get ready for the May 6 race in Mid-Ohio.

Flis will have a better idea on whether SDR will miss one or two rounds once the delivery time for a new tub is provided by Dallara, and depending on how the sponsorship hunt goes, it sounds like June 1 at Cadillac’s home event in Detroit is the fallback position.

“Our goal is Mid-Ohio,” he said. “We’d love to be there because we really don’t want to miss multiple races. But it comes down to the timeline of parts and tub, and on the commercial side, I need to be sure we’re cover our obligations to Cadillac. Detroit’s a big one for them that we want to do.

“So we don’t want to rush going too fast just to get out and race if everything isn’t coming together as quickly as I need. We might miss the next two [races] until I see where we’re at with everything. We have some meetings next week with the commercial side so we’ll know more then.”

Once the blue No. 90 is ready for action, Flis hopes one wish will come true.

“I could go for a boring finish now,” he said with a laugh. “Doesn’t even have to be a win. Just a finish with nothing to replace, nothing to fix. But we’ll get through this, regroup, and come back stronger.”