It was all going so well.

Testing had been strong, practice was encouraging, qualifying was good and the first part of the race was even better. Haas was delivering on its promise, and a massive haul of points looked set to come the team’s way.

Kevin Magnussen was running fourth after a great start in which he leapfrogged Max Verstappen, and then a spin from the Red Bull driver had promoted Romain Grosjean to fifth. The car certainly looked quick enough to hold on, and such a finish would have been worth 22 points. Haas scored 47 points in the whole of 2017.

And then in an instant, it was gone.

A cross-threaded wheel nut led to Magnussen being released with his left rear tire incorrectly attached. No sooner had the Dane walked away from the car that the same fate befell Grosjean, this time with the left front to blame.

Shots of Guenther Steiner with his head in his hands were followed by images of distraught mechanics as a weekend of huge promise was suddenly over.

The incidents were entirely coincidental, with Steiner later saying a lack of pit stop practice is the only possible reason for the error being made twice in a row.

Within the media center, there was a genuine sense of shared disappointment. The drivers had done nothing wrong, and yet they had been robbed of the strongest result of the team’s history, and the chance to bloody the noses of Renault, McLaren and even Red Bull.

But that sympathy did not extend to rival teams in the paddock.

If any team was going to feel sorry for Haas it is Ferrari, but the team with which Haas enjoys a close technical partnership was able to take full advantage of the American outfit’s misfortune to secure victory for Sebastian Vettel.

And that very same technical partnership ensured that – social media accounts aside – there was even less sympathy from other teams. 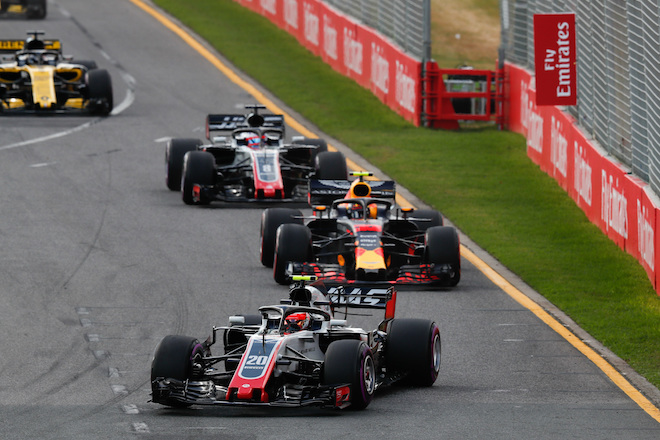 Fernando Alonso had publicly described the 2018 Haas as “a Ferrari replica from last year” when Grosjean and Magnussen showed good pace on Friday. They were comments that led Magnussen to hit back and suggest that Alonso was “annoyed” that to be behind a much smaller team, adding: “I wonder why, I’ve raced for McLaren, I’ve seen their infrastructure.”

“It was the same thing last year. We were ‘Ferrari B’. I can’t remember who was saying that. We are using the same suspension, the same gearbox, the same engine… Everyone knows that the suspension is defining a lot of the flow, so of course there are going to be similarities. But again, we are doing our own car, and if we were Ferrari B, we would be up there with them.

“So it’s not true, and it’s not nice for the people that work at Haas and produce the Haas VF-18.

“I think the way we operate the team and the way we’ve created the partnership with Ferrari is good for F1. It shows that you can come in and make things look pretty good in a short amount of time. Of course if we had to do everything from zero we would be nowhere near where we are today, but we’ve got that partnership with Ferrari which is very important for us. So I think it’s a good thing for Formula 1 to show that if you want to come into the sport, there’s a way you can do it that you can actually be successful quite early on.”

The fact that both drivers were addressing comments about the team’s car before the five red lights had even gone out on the first race of the season spoke volumes. Haas has rattled some cages, and the teams under threat don’t like it.

Over the past two years, while Haas was not overly strong, the rest of the midfield was more outwardly tolerant of the way the technical partnership with Ferrari impacted the team’s cars. There was clear unrest ahead of its debut, but loopholes had been closed off to prevent a repeat.

That’s a step that was taken in order to protect the current definition of a Formula 1 constructor, and prevent customer cars being permitted. Since then, Haas has worked within the technical regulations to be much more competitive as a new team than the likes of Manor, Caterham and HRT were before it. 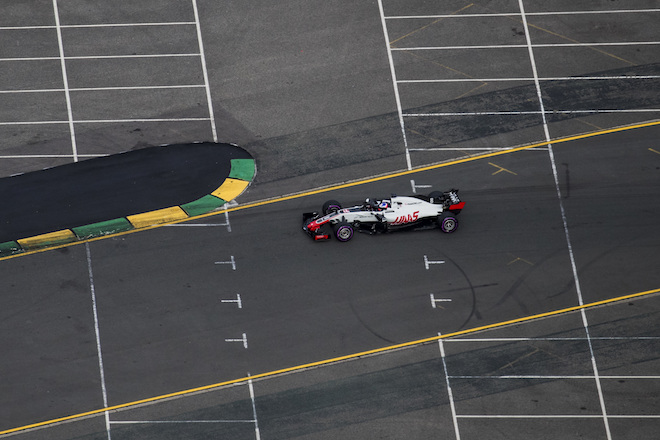 Two years ago, a stunning debut in Australia led to further questioning of whether F1 should allow teams to use so many parts from another constructor, and an even better result in Bahrain only continued that discussion. But then Haas failed to maintain that performance level, and the talk died away.

Similarly, last season, inconsistency was perhaps the Haas savior as it only threatened the front of the midfield on occasion.

Perhaps this year will be more of the same, but the pace the car has shown so far has caught the attention of its midfield rivals, with Force India technical director Andy Green and chief operating officer Otmar Szafnauer spending much of their post-race media debrief in Melbourne raising their eyebrows and sarcastically questioning how such a small team of 230 employees has produced such a quick car.

The double-retirement didn’t buy Haas any time. It is a threat to all bar the top three, and the rest of the field is sitting up and taking notice.

“Our number one focus is on doing what we have to do to get better over time,” Szafnauer said. “But then the bigger picture you’ve got to ask yourself is, how is that happening? We’ve got to work hard to beat them and other people in the midfield, that’s our number one priority, but I just think people should ask: How’s that possible? I don’t know how it’s possible.”

“Maybe more people will start asking it now given that their relative performance or competitiveness is very strong at the moment,” Green added. “So hopefully more teams will be asking that question.”

The problem is, the situation appears to be being used as a stick to beat Haas with. Its Ferrari collaboration is being spoken of as if it’s illegal. If it isn’t within the regulations, then obviously penalties have to be paid, but if it is, it should be receiving praise, not criticism.

Every team is searching for the smallest advantage in order to try and beat its rivals, so if a team can find a big one that is legal, it would be foolish not to exploit it.

Sadly for Haas, it failed to exploit it on Sunday in Melbourne when it had a golden opportunity to secure a significant amount of points. But unlike previous years, the impression is this is a car that will remain competitive on a variety of circuits.

Perhaps that will mean Haas can quickly put the pain of this weekend’s missed chance behind it. But it will also mean the dissent is not going to go away any time soon.