In its heyday, ABC had Jim McKay’s authoritative presence calling the play-by-play and reacting to Jackie Stewart’s observations.

Then we had the Bobby & Sam Show, where Unser would argue with Posey every 25 laps as Paul Page played traffic cop and referee. Keith Jackson, Brent Musberger and Al Michaels also added some star power to the Indianapolis 500 telecasts through the years.

In the mid-1970s, the Indy 500 was second only to the Olympics in terms of rights fees as ABC paid dearly for a property that cranked out 16 ratings with a 30 share and was tape delayed.

When legendary announcer Chris Schenkel talked best pal Tony Hulman into taking a flyer on televising the Indy 500 in 1971, the IMS owner was reluctant at first, concerned about how it could affect attendance. But that was never an issue, as tickets remained hard to get and the ratings were solid 7s and 8s.

For the longest time it wasn’t “Always Bad Coverage” – it was first class, and ABC won an Emmy for its Indy show in 1989.

But between The Split, the explosion of cable television, NASCAR and ABC’s indifference, IndyCar racing became a stepchild. The past decade has been a good example, with no dedicated racing staff, revolving announcers, and a severe lack of anything approaching entertainment or thorough coverage. 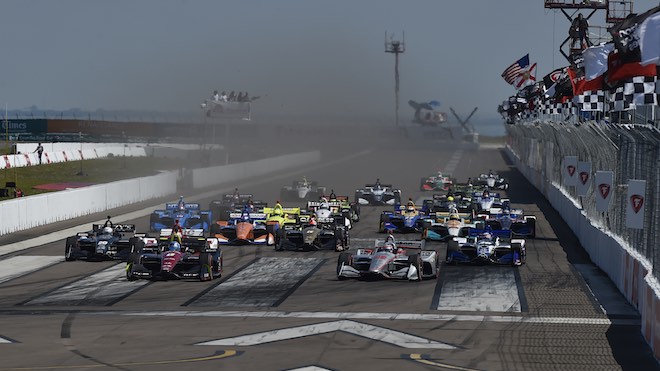 The 2018 IndyCar season opener at St. Pete was a case in point, as an otherwise racy street show dissolved into WTF TV. The producer missed both passes for the lead, commercials were still airing on three restarts, nobody ever mentioned what happened to rookie Jordan King after he took the lead, and we never got to hear from Robert Wickens after he got knocked out of what looked like a rousing victory. And they only had two pit reporters for 24 cars.

I’ve bugged Mark Miles for months, sending him impassioned emails about why NBC is such a better option than ABC or forwarding letters from irate fans but it’s not because I work for NBC. I coined “Always Bad Coverage” back in 1982 when, instead of showing Rick Mears trying to dive inside Gordon Johncock on the last lap, they cut away to Dina Mears cheering. And I was on their X%$# list long before getting picked up by The Peacock.

This new contract is good because it’s the best thing for IndyCar, and Miles knew it: he just had to weigh the offers after ABC reportedly doubled its interest to 10 network races. He said he didn’t make up his mind until last week, and I believe him. But the bottom line is that if you can’t tell the story in five races, then why would increasing that number make things better?

RELATED: Miles on TV deal: ‘It brings IndyCar to one home’

Race fans are an opinionated lot that get pretty cranky sometimes, but they’re savvy enough to know what’s good TV and when people care, and it’s very obvious that NBCSN’s IndyCar team checks both boxes.

My boss at NBC, Rich O’Connor, was a stick and ball guy from New York who inherited IndyCar racing a decade ago, but instantly embraced it. If IndyCar has an idea or suggestion, he’ll listen and react if possible, and there’s no way IndyCar would ever get that kind of support from ABC. And he’s always pushing to get IndyCar more air time.

Terry Lingner made his mark with Thursday Night Thunder on ESPN and is easily the best racing producer in the business. He’s knowledgeable, passionate and always looking for new angles. His demeanor during a race is supportive, unlike some the TV psychos from days gone by, despite all the madness going on around him. But if he ever missed a pass for the lead on a street course, he’d never forgive himself. 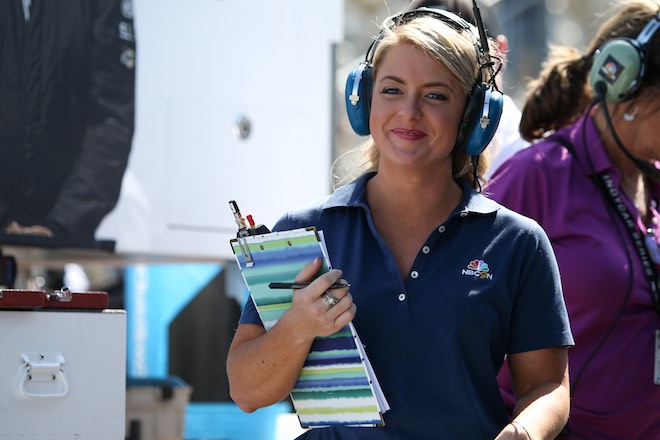 Our booth is a combination of Australian rules football, California Cool and Canadian Club all mixed together in a colorful concoction that makes people laugh, think and argue. Leigh Diffey stays on top of a race better than anyone, while Townsend Bell and Paul Tracy know the insides of the sport and aren’t afraid to speak their mind, rip each other or another driver.

Marty Snider is the consummate reporter with a commanding voice and patrols the pits along with Kevin Lee, Katie Hargitt (pictured above) and Jon Beekhuis, who work hard to sell their stories to Lingner, who understands the value of different voices.

An IndyCar race on NBCSN (soon to be eight on NBC) is easy listening – it’s one big conversation between the booth and the pits, and it makes fans feel like they know what’s going on at all times because, well, they do.

ABC gave the Indy 500 added relevance and big time coverage for many years. But it was way past time for a change, and NBC will do for Indy what it’s done for the Kentucky Derby: restore that mystique and tradition. Tell lots of cool stories. Follow the race, anticipate strategies and talk to all the players. Promote the hell out of it. And grow the ratings.

Miles made the right call, and now he has a TV partner that can make a difference.