RealTime returns to its roots in TCR

RealTime returns to its roots in TCR

In its fourth decade of competing in Pirelli World Challenge or its predecessor and entering its 32nd year competing with Honda or Acura factory support, there was little doubt that RealTime Racing was going to continue for 2018 in some form or another.

“We were reasonably confident we were going to have a program; we weren’t positive where it was going to be,” said team principal and seven-time World Challenge drivers champion Peter Cunningham. “But we’ve been at this for a long time, and some years our future has been plotted out for us, or we’ve plotted out our future with a little more certainty in the offseason going into the next year. We did have some uncertainty this year, but we had good reason to believe it was going to work out.”

The form in which RealTime would be competing was revealed last week when the team announced it would be entering two Honda Civics in Pirelli World Challenge’s new TCR class that uses the international TCR formula.

“We were hearing about TCR in the last year. We knew that was something that was on the horizon that we would be interested in and Honda would be interested in. At the same time we were hopeful we could secure a customer with at least one NSX to continue and do not only TCR, but also do the GT3 program for the customer. As it turns out, the customer [program] wasn’t realized, and we had plenty to do to focus on the TCR program which we’re very excited about,” explained Cunningham.

Until the advent of the GTS class in 2010, RealTime had been a fixture in the Touring Car category, winning titles not only with Cunningham, but also with Michael Galati and Pierre Kleinubing. Even when it added GT with the original Acura NSX, it maintained a Touring Car campaign. But when the team moved to GTS with the Acura TSX, it no longer had a regular presence in Touring Car. Then it moved to GT with the TLX-GT in 2014, began developing the NSX GT3 platform in 2016 and last year competed with that car, bringing home a win in the first SprintX round at Utah Motorsports Campus.

The NSX program, however, came with significant support from Acura, and PWC management is keen on it being a customer-based racing series, thus the departure of Cadillac and the end of RealTime’s Acura-supported GT3 NSX program. TCR provided the perfect avenue, and Ryan Eversley, who has been with the team since 2015, was tapped as the full-time driver. The second car, which Cunningham intends as a customer car, will be driven at Circuit of The America’s this weekend by RealTime alum Nicholas Esayian. 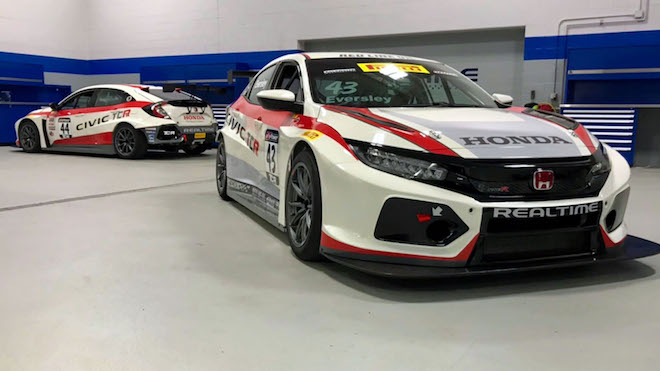 TCR makes its debut as a full World Challenge class at COTA. In 2017, the series tested the waters by allowing heavily detuned Audi RS3 LMS TCR cars in Touring Car. This year those cars must run in the TCR class, and in addition to Honda, will be joined by Volkswagen, Hyundai and Alfa Romeo. All these cars have competed against each other in other TCR-based series around the world, and the results have often been spectacular.

“I think it will be very competitive. It’s an unknown how accurate the [Balance of Performance] is for the United States and for the teams and cars and drivers that are taking part. But if it’s anything like the TCR category elsewhere in the world, it’s going to be remarkably competitive,” said Cunningham. “There’s some pretty tough competition out there. The Audis are going to be tough, and we’ve heard good things about the Hyundais. It’s going to be a battle.”

Fourteen entries are listed for COTA. Some of the teams running Audis have something of a head start, but the beauty of a homologated class is that much of the hard work has been done on the cars before race teams get their hands on them. Whether that will prove enough for everyone to be competitive from the get-go remains to be seen, but it’s likely that once the season hits its stride, no one team will be able to run away.

RealTime joins Bryan Herta Autosport with a pair of Hyundai i30s; Murillo Racing, Compass Racing, Heinlein Racing Development and The Racing Company with Audis; TFB, Copeland Motorsports, FCP Euro and Heinlein again with Volkswagen GTIs, and one Alfa Giulietta from Alfatcr.USA. TCR will be joined in its races by the TCA class at most venues, while Touring Car will have its own race.

This weekend, TCR races at 5:55 p.m Central on Saturday and 1:25 p.m. Central on Sunday. Fans can follow along on the new Pirelli World Challenge app for iOS and Android or at http://www.world-challenge.com.