Hemric will drive the No. 8 Chevrolet Camaro with sponsorship from Smokey Mountain Herbal Snuff. Richard Childress Racing will also field Hemric in the September 30 Cup Series race on the new Charlotte road course.

“To make my debut at Richmond will make me feel at home since I spent years coming up through the ranks at short-tracks across the country,” Hemric said. “To do it again in front of my hometown crowd in Charlotte later in the year is an overwhelming feeling.

“Many people have laid everything on the line to get me to this point and I am extremely grateful to all of those people for putting me in position to get this shot in the Cup Series. These are going to be two very special weekends, to say the least.”

The 27-year-old does have experience behind the wheel of a Cup Series car – just not in race conditions. Last season, Hemric practiced for then-RCR driver Paul Menard at both Kansas Speedway and Texas Motor Speedway – he also qualified the car in Texas – while Menard was preparing for the birth of his second child. 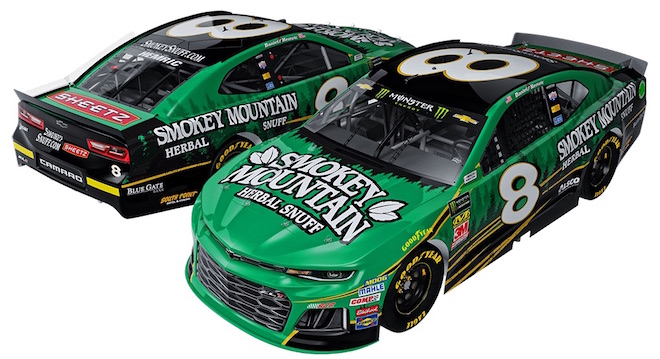 A full-time driver in the NASCAR Xfinity Series, Hemric was a Championship 4 contender last season and finished fourth in points following electrical issues in the season finale. Hemric has 38 Xfinity starts with 19 top-10 finishes. He sits seventh in points going into the series’ first off weekend.

Hemric also has 49 career starts in the Camping World Truck Series with 30 top-10s and 15 top-five finishes.

“Since joining our organization, Daniel Hemric has shown his determination and dedication to this sport both on and off the track,” said Richard Childress. “He has proven his ability behind the wheel by making the Championship 4 in the Xfinity Series in 2017 and his continued success this season. Making his Cup Series debut is the next step in his career and we are proud to have him take that step with RCR.”