The spotlight of his success in the Daytona 500 now dimmed, the learning curve has set in for Darrell Wallace Jr.

“We’re trying to figure everything out,” said Wallace. “I’m laying my head down at night not leaving a stone unturned, so in that regard, I give myself an A-plus. But, we’re just not hitting on all cylinders right now as a team. We’re still figuring everything out from the switch, so it’s going to take us a couple of races.

Wallace finished second at Daytona. In Atlanta, he called it bad luck when he ran into the back of Ricky Stenhouse Jr. while trying to find his way through a cloud of smoke. A blown engine from Trevor Bayne created hazardous conditions and Wallace crossed the finish line 32nd.

In Las Vegas, Wallace admits the No. 43 team “missed it” and fell on their face. He finished 21st. Last weekend at ISM Raceway, Wallace felt went well as the team applied things in the race learned from practice, even with a 28th-place result. 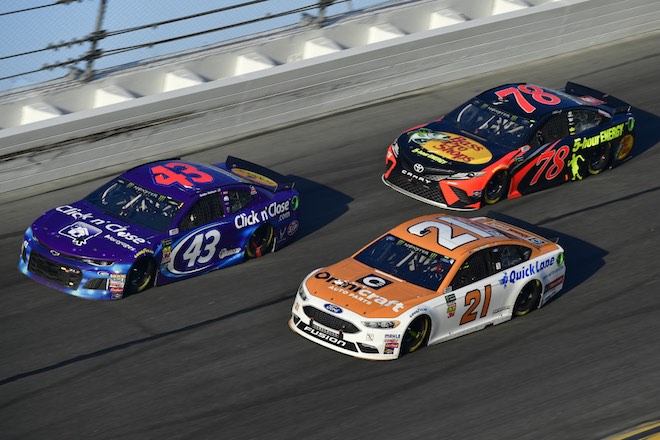 “I’m like a kid in a candy store,” Wallace said of his situation. “I’m racing against the guys I used to watch on Sunday and that’s pretty badass. I remember that moment I had last year at Daytona when I was right next to Jimmie [Johnson]. I was like, ‘Damn, we’re racing against Seven-Time right here, that’s pretty cool.’

“Now I’ve raced around him enough and raced around the other guys enough that I’m starting to learn from them for sure, but at the same time, man, I can’t believe I’m still here.”

Part of that shock is racing for Richard Petty. Even though he was called up for four races last season when RPM’s then driver Aric Almirola was injured, Wallace is still basking in being around one of NASCAR’s legendary figures. “Surreal” is how Wallace described it.

In Daytona, he fondly recalls playing Uber driver for Petty one night after dinner, whereupon the two had a conversation about life and racing. This past week Wallace spent time with Petty and the family in Wyoming bonding over board games and riding snowmobiles. With RPM being a family-oriented team, Wallace has felt welcomed from the beginning and wants to continue to integrate himself as part of the family.

Already, though, Wallace has been struck by a lesson from Petty: “You can overcome a lot of things if you put your mind to it and you have the will to do it, but you can never overcome fate.”

Wallace is 18th in points going into Auto Club Speedway, where he will make his first start in a Cup Series car Sunday.