Keating looks to keep the good times rolling at Sebring

Keating looks to keep the good times rolling at Sebring

“If I felt I had to repeat as a winner, I might be worried,” Keating said. “But our goal is to win the championship. We’ve been second three years in a row, and we don’t want to be second at the end of this year. So there is less pressure to win races. There’s more pressure to have consistent top-five finishes, and we have a car that we think can do that. So our goal here is to have a top-five finish, and to have some fun.”

Last year’s victory was not only the first at Sebring for Keating, it was also the first victory for the AMG-Mercedes GT3, then brand-new to North America. It also came on the 60th anniversary of Mercedes’ only prior class win at Sebring.

The exultation of victory is just one of the widely ranging emotions Keating has felt at Sebring. 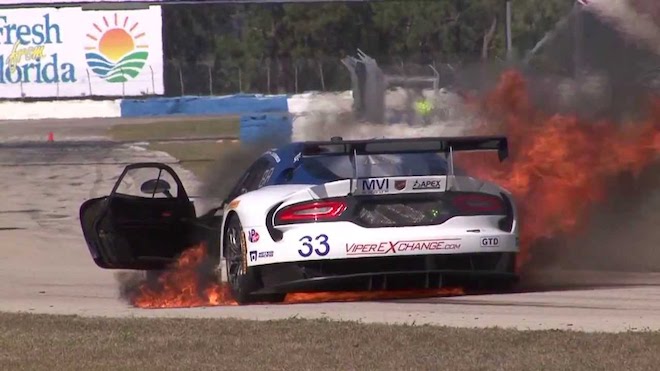 “I’ve had crazy finishes here,” he explained. “In 2013, we ran out of fuel, one turn short of the podium. In 2014, I burned to the ground in the Viper (pictured above). In 2015, we passed for the lead with two laps to go and blew the engine. Then in ’16, we broke an axle, which never happened in our history with the Viper. This race has been very difficult for us. That’s why it was such a big deal to win last year.”

Since that victory, the car has added weight – and the competition has gotten faster.

“We’re a lot heavier than we were last year, so we’re not as quick,” Keating said. “Most importantly, I think the field has gotten a little better than last year. We were really strong here last year; this year, the field is pretty well balanced. But our car is really good here. This is probably the best track for the AMG-Mercedes GT3 – it’s an easy car to drive here, which is the most important thing in a 12-hour race.”

Aside from the prestige of the 12 Hours, Keating finds its atmosphere of this race especially engaging.

“Sebring is unique among all races, and I like to refer to it as ‘the spring break of motorsports,'” Keating said. “My favorite thing is the fans, along with all the history. It’s unique – it’s not an FIA or F1 track, it’s an old Air Force base, and it’s got a lot of character. That makes it fun racing here.”