The most surprising stat about Robert Wickens taking pole for his first Verizon IndyCar Series race is that he wasn’t the fastest rookie on the day. That honor went to Jordan King, also making his series debut in the No. 20 Ed Carpenter Racing Fuzzy’s Vodka Chevrolet.

The Briton, who comes to IndyCar from FIA Formula 2, set a new track record for the St. Petersburg street circuit of 1m00.0476s in the opening round of qualifying, eclipsing Will Power’s old standard set in 2016. Although Jordan “only” managed fourth in the Fast Six, making him the third-fastest rookie behind Wickens and A.J. Foyt Racing’s Matheus Leist (third), it was a spectacular debut nonetheless. But to the man himself, it wasn’t all that surprising.

“Two months ago, I had no expectations, but then slowly after driving the car, I started to realize that actually it’s not too dissimilar to what I’ve driven before, and I feel comfortable in the car,” said King.

“It’s not like it’s something where I need to learn everything again. Yes, there’s a few driving techniques that are different, but we’ve got a driver coach that’s helped with that, and the engineers have really helped with some more details of learning. But the other thing that’s helped is they’ve trusted me, as well. They’ve let me kind of be myself and go forward with it.”

His early pace might have pushed his expectations a little too high, though.

“Coming into qualifying, I knew we were quick enough to get through, but still, I had to perform, and it being my first time, I was obviously putting more pressure on myself than anybody else,” he said.

“But then I just had to keep reminding myself that if I just do what I know I can, the rest of it will be fine, and that was the case even after the last Fast Six. When I got out of the car and looked at the timing screen I was a bit annoyed, but we went higher up because it was so close, and I knew there was still lap time there.

“It’s more just kind of taking a deep breath in and going, ‘Right, just don’t get ahead of yourself and just keep doing lap by lap’ sort of thing.”

The fact that three of the top four qualifiers were rookies was obviously a burning topic but, like Wickens and Leist, King played down its significance. 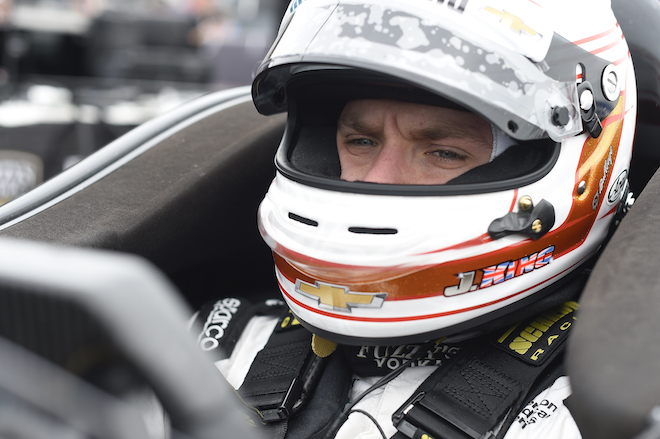 “You asked whether being a rookie is actually an advantage, and I think, yes, it is, but it also isn’t,” he said.” You see in numerous walks of life that being experienced counts for a lot more than being inexperienced, but I think the thing you’ve got to remember about us is, yes, we’re rookies in IndyCar, so we don’t have to relearn things, but we’ve also been racing, 12 years for myself.

“So we have got a lot of experience in driving cars, new tires, changing conditions and that sort of thing. We still have to learn the new car, but there’s still a lot of experience in the past. You look at a lot of the young drivers coming through, they are actually very experienced and well-rounded, and I know Matheus won the British F3 championship, and so did I.

King noted that the challenge of getting the most out of the new IndyCar aero package applies as much to the teams’ engineers as their drivers, which further complicates the process of drawing conclusions from today’s results.

“I don’t have any pre-conceptions on how the car should handle; but the engineers are also new to this car, as well,” he said. “So I think it’s as much of a challenge for them as it is for the drivers,” he said. “If they can’t give you a fast car, you can’t drive it fast, so there’s always another side to the argument.

“And our guys back at base, they have worked really hard to understand the new car, but we’ve also got new brakes, as well, so there’s five or six different things that they’ve had to get their head around and work out what’s right. Now, we’ve done a good job this weekend, but that’s not to say the next weekend there will be different challenges on a different circuit. It is always a learning process, and over the two days testing we had preseason, we made a lot of progress, or a lot of learning, as well, just understanding how the car behaves.”