Scott Hargrove of Tsawassen, B.C., Canada made a spectacular Pirelli World Challenge GT debut Saturday in the streets of St. Petersburg when he came from last on the starting grid to score a 3.9-second victory in the 50-minute sprint race.

Hargrove, 23, was no stranger to the tight and tricky 1.8-mile, 14-turn temporary circuit near the St. Petersburg harbor after competing in eight open-wheel races at the Florida track dating back to 2013. Hargrove scored victories in USF2000 events, second place in Indy Lights races and third in the Pro Mazda contests over his early racing career.

On Saturday, Hargrove had to start last in the 11-car lineup after a qualifying incident in the morning. But a wild start in Turn 1 for the GT season opener allowed Hargrove to move to second on the opening circuit of 34-lap race.

“These PWC guys are pros and I think I ran fast in first practice, but everyone seems to be fast in practice,” said Hargrove. “The start was crazy. We were pretty quick in qualifying but then I saw Daniel (Morad) in front of me and I knew that I had good brakes. So, after the third time, I knew I could try and make the pass for the lead.”

“In qualifying, I clipped the wall just enough to collapse the front suspension. But my mood has done a 360. I definitely had a feeling that we could have been on pole today. I’m thrilled with the win because the car is flawless. I was able to put the laps down when I needed them and I’m pretty excited for tomorrow (Sunday in Round 2). I don’t think there was much of a learning curve for me because I come from a sprint racing background. It’s not the same as a lot of these guys that come from endurance racing and it’s a shock (at how aggressive it is).”

At the drop of the green, GT cars went four- and five-wide on the Alfred Whited Airport runway and entered Turn 1 with numerous cars making contact. The incident cost several drivers including 2016 GT champion Alvaro Parente in the No. 9 K-PAX Racing Bentley Continental GT3, veteran Spencer Pumpelly in the No. 00 TRG Aston-Martin Vantage GT3 and Parker Chase in the No. 19 TruSpeed Motorsports Audi R8 LMS.

At the restart on lap 8, Morad took his No. 2 CRP Racing Mercedes-AMG GT3 to the front with Hargrove and pole winner Toni Vilander in the No. 61 R. Ferri Motorsports Ferrari 488 GT3 hot on Morad’s bumper. After several efforts in turn one to make the pass for the lead, Hargrove was able to make the move past Morad on Lap 18.

Hargrove then held off the challenges of Vilander, who set a new qualifying track record Saturday morning, and was able to set a new race lap record of 1m12.059s to secure the pole for Sunday’s 50-minute Round 2 event set for 3:15 p.m. ET.

“I knew that something would happen at the start and I even talked to the race director, saying that when we go green that creates the situation where we’re instantly four cars side-by-side,” said Vilander. I went inside and the Corvette (Keilwtiz) couldn’t make the corner and that created the whole situation. Overall, we will take the points for second and concentrate on Sunday’s race.”

“I was shocked that I came out in front,” said Morad, who started fifth. “I think another key to that start was the fact that I started on scrub tires – everyone else was on new rubber. I thought that with the rain that came in that we might have a little bit of an advantage at the beginning. But I knew that it would be a tough time at the end and it would start with rear tire degradation, and that seemed to be the case. Overall, third place is a great start to the year.” 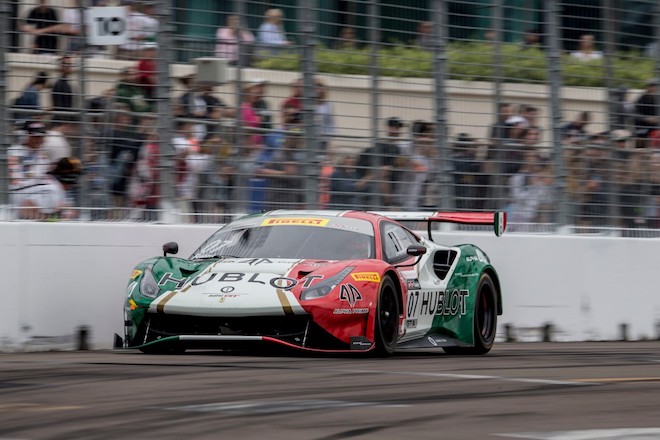 In the GTA division, former GTA series champion Martin Fuentes of Mexico City drove the No. 07 Squadra Corsa Italia Ferrari 488 GT3 to the win over Rodrigo Baptista in the No. 3 K-PAX Racing Bentley Continental GT3 and Yuki Harata in the No. 55 Dream Racing Motorsports Lamborghini Huracan GT3.

“I knew every start here at St. Pete is hairy,” said Fuentes. “I knew I had to pay attention in the front and definitely St. Pete took its customers. I just watched, tried to find the gap, saw some crashing on the left and on the right. I saw the curve was clear and saw the other guy spinning so I just stomped the gas to get through there and try to get myself out of trouble. This is the first time I’m driving (a Ferrari 488 GT3) with TR3 and I’m very excited.”