Robert Wickens was hoping to make the Top 10 in his IndyCar debut, but following Saturday’s qualifying for the IndyCar season opener in St. Petersburg, the rookie from Canada found himself looking back on his 23 competitors.

“I’m a little speechless,” said Wickens after snaring the pole position in the final lap of a Fast Six session held in greasy conditions due to sprinklings of rain. “Going into the weekend I was hoping we could make it into the Top 10 and when we got into the Fast Six I was like, ‘OK let’s go have some fun’. My team called great strategy, and made the right changes for the track at the end.

“I didn’t really know where I was the whole session because of the way the track was evolving. So it was a little surprising but I’m super happy. I’m still getting used to the reds, but I think the mixed conditions probably helped the rookies a bit because nobody could really get the most out of the reds.”

Wickens wrestled a lap of 1m01.0664s out of his Schmidt Peterson Motorsport Honda, just nudging four-time St. Pete polesitter Will Power by 0.0703s

“It was really unpredictable, how slippery the paint was,” said Power, a two-time St. Pete winner. “Obviously Turn 1 was the worst. But it got kind of quick at the end there – apart from T1, the rest of the track was on.”

The Fast Six featured six different teams with three rookies, and two of them will share Row 2 on their Verizon IndyCar debut.

Matheus Leist gave A.J. Foyt a big thank-you for hiring him by running 1m02.7631s in his ABC Chevy and starts third, just a fraction faster than Jordan King, who stuck Ed Carpenter’s Fuzzy’s Chevy into fourth with a lap of 1m01.7633s.

Takuma Sato, in the RLL Honda, lines up fifth ahead of Ryan Hunter-Reay in his Andretti Autosport entry.

But it was a tough afternoon elsewhere among the Andretti squad. First, Marco Andretti was dropped from sixth to ninth in the opening round for impeding another driver, and then teammate Alexander Rossi suffered the same fate following the Fast 12. Rossi was third-quickest in that session, but the penalty of losing his two fastest laps cost him his place in the Fast 6, allowing Hunter-Reay to be promoted in his place.

In part, the topsy-turvy grid owed something to a few drivers banking a lap on the reds early in the second qualifing phase. That paid off when conditions worsened as the session went on, and the likes of Scott Dixon, who’d started on the blacks, paid the price.

“We thought it was going to get drier as the session went on, so we started on the blacks,” he said. “We just misread it. I think we’ve got good speed, but obviously just came up short.

He still goes into tomorrow’s race in better shape than some of the other pre-weekend favorites. Simon Pagenaud was one of many to get caught out by the slippery paint at Turn 1 and drew a red flag at the end of the second round, while Penske teammate Josef Newgarden didn’t even make it that far; the defending series champion a surprise elimination from the opening round.

“Not sure [what happened] to be honest; it just wasn’t enough,” he said. “I thought I did an OK lap, but everyone picked up more than I thought they would and it just wasn’t enough at the end of the day. Not what we wanted to start the weekend, but I think we’ve got enough to maybe race this out.” 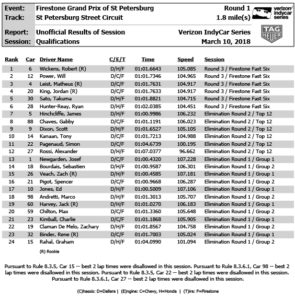