Teenager Rinus VeeKay faced plenty of challenges prior to the opening round of the new Pro Mazda Championship Presented by Cooper Tires, but he put all that behind him this afternoon as he swept to an impressive victory for Juncos Racing in the first of two races which will comprise the Pro Mazda Grand Prix of St. Petersburg Presented by Allied Building Products.

Fellow Pro Mazda debutant Parker Thompson finished a close second after leading for much of the 25-lap race for the Exclusive Autosport team. Robert Megennis backed up his victory in last year’s Cooper Tires USF2000 Championship Powered by Mazda race at St. Petersburg by finishing third for Juncos Racing.

Last year’s USF2000 champion, Oliver Askew, started on the pole for the St. Petersburg-based Cape Motorsports team but lost his advantage after being forced into an outbraking duel into the first corner by second-place qualifier Harrison Scott (RP Motorsport Racing). As the two rivals ran too deep into the turn and missed the apex, second-place qualifier Thompson nipped into the gap and assumed the race lead ahead of teammates Megennis, who had started fifth, and VeeKay, who qualified eighth.

An incident in Turn Five between Brazilians Rafael Martins (Team Pelfrey) and Carlos Cunha (Juncos Racing) brought out the Safety Car after Martins’ debut ended against the wall.

While Thompson made an exemplary restart to hold onto his lead, VeeKay continued his charge toward the front by scything past Megennis into second place at Turn 1.

Thompson had extended his lead over VeeKay to over three seconds after 14 laps, only for that margin to disappear in an instant when the yellow flags flew again after English ex-Formula Ford racer James Raven’s first-ever race with slicks and wings ended with an incident for his DEForce Racing Tatuus-Mazda PM-18 in Turn 8.

The Safety Car gave one more opportunity for VeeKay. Thompson staunchly defended the inside line into Turn 1 following the restart but VeeKay was able to carry more momentum through the corner, then drove clear around the outside of the Canadian in the flat-out Turn 2. Thompson never gave up hope of regaining the point but had to settle for second.

“I watched the USF2000 race and I saw a lot of guys going straight in Turn 1 because they were trying to go through the dust on the inside,” VeeKay said.

“It happened to us as well, but I was prepared and took advantage to get up to fourth. I knew Parker was fast and that I could not pass him in dirty air, so I knew my only chance was on the restart under braking.  I set it up well and he was in the dust on the inside, and he kept it safe and let me go. I don’t know what it is about St. Pete – I think the racing gods want me to have bad qualifying sessions so that I have less expectations and then do well in the races.”

Megennis maintained third despite a strong charge from Cunha, who worked his way back from ninth place after his opening lap incident. Polesitter Askew, Sting Ray Robb (Team Pelfrey) and David Malukas (BN Racing) all finished in a train, followed by Nikita Lastochkin (Cape Motorsports) and Scott, who clearly had a fast car but was simply unable to find a way past.

VeeKay’s victory capped a glorious day for the youngster, who earlier in the morning secured the pole position for Race Two, which is scheduled to start at 4:30 p.m. tomorrow.

Coverage can be found on a series of platforms including Road to Indy TV, the Road to Indy TV App and dedicated broadcast channels on demand via Apple TV, Amazon Fire and Roku and, most recently, the Xbox One Official App as well as live streaming and live timing on promazda.com and racecontrol.indycar.com. 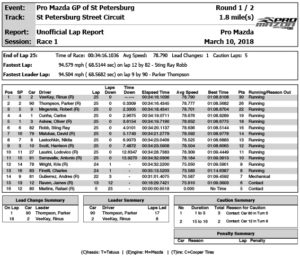