Be sure to bring your binoculars and telephoto lenses to Verizon IndyCar Series events this year because spectacular things await.

Demonstrations of supreme car control will be required to extract maximum performances from IndyCar’s new, low-downforce bodywork, and for those in attendance at road course and street races – and even the short ovals – artistry will take place behind the steering wheel.

Thanks to a move away from its high-downforce approach to racing, IndyCar has thrown out the extreme braking and cornering stabilities drivers relied on through 2017, and replaced it with cars that handle more like something Ken Block would drive in a Gymkhana video than a glued-to-the-track IndyCar. The masters of car control – the ones with the fastest hands to catch the drifts and maintain ultimate speed through the corners – are expected to shine in the final championship standings.

Some of those masters are well-known, and others could identify themselves from the opening practice session at St. Petersburg. The new bodywork should suit Chip Ganassi Racing’s Scott Dixon like it was tailor-made for his skillset. Team Penske’s Will Power is another driver who can make ridiculous lap times while dealing with a tail-happy car.

Graham Rahal thrives when the work rate is high, Marco Andretti’s most impressive performances have come when an unwieldy chassis needs to be tamed, and there are more like them who’ve found comfort while dealing with persistent oversteer. Where everybody could be fast with insane downforce during the Chevy and Honda aero kit era, the slippery 2018 universal aero kit might not end up being loved by those who need understeer.

“I do think that that’s quite possible,” Dixon [below] told RACER. “I do think there will be more separation created with this bodywork. Some guys will find it more to their liking and live with the back of the car being more unstable than what we had before, and then there are other guys who might suffer a bit because they can’t get that secure feel at the rear that they prefer.” 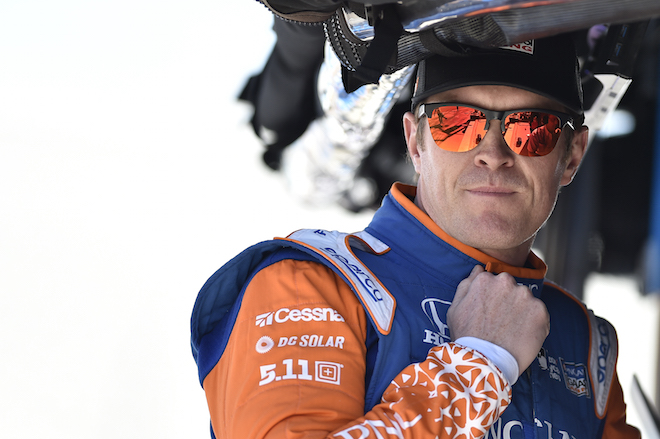 “It’s going to be very difficult to have it, like in the old car, where it was very solid and planted in the rear,” he said. “I think you’re going to be losing both ends just simply because you have less grip. It’s kind of funny how you get so used to a big amount of downforce like we’re running on with some of road courses and street courses and then you step back, and it’s still around 5,000 pounds of downforce, which is a lot, but it feels so much harder to drive simply because you’re used to just going so deep into the corner and carrying mid-corner speed, and going to a lot of throttle immediately. That’s all changed.

“It’ll definitely require really thinking technically about the corners again, whereas before, I felt like with the old car you were charging in. You could just drive so hard and didn’t really have to worry about if it would stick. You could go so deep in and get so much throttle on the first application; it was becoming ridiculous, honestly. Well, they fixed that with the new bodywork…”

Dixon has built his reputation by living on the ragged edge of adhesion. But even with his unique ability to perform 100 micro-corrections through the steering wheel each lap, the Kiwi is concerned it might not be enough to succeed at times with the universal kit.

“What I’m curious about is to see some of the shifts in which teams and drivers can get a handle on the car,” he said. “It’s a lot harder to hit the sweet spot with the setup right now than what it used to be, especially for road and street courses. Even in qualifying, man, you could get knocked out of Q1 just because you couldn’t get the lap together, which was not a real concern [last year]. 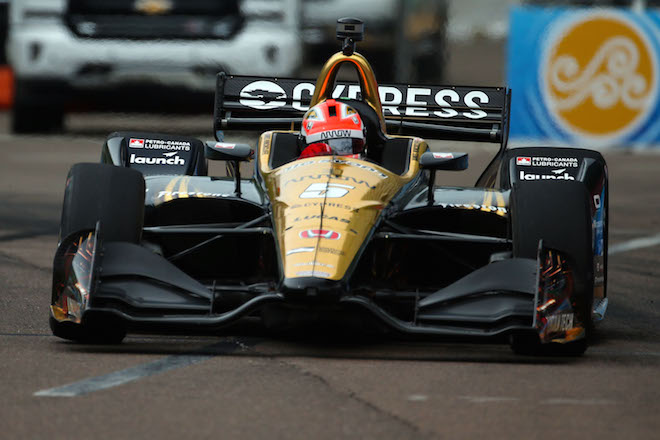 “If your car’s [handling is] off, you won’t have that extra downforce to compensate, and sure, I guess you could try and drive harder and get sideways everywhere doing it, but there’s still that fine line where you start losing time because of it.”

Dixon also says there could be times where, if the braking and cornering instability is too severe, dialing back on the fast hands would be the smartest move to make.

“You’re going to have to be on top of your game, and maybe in some ways be a little more conservative, just to make sure you can be more consistent because it’s quite easy – at least I’ve found, anyway – to overstep the mark a bit,” he said.

“And through the race, too, because, you’re probably going to burn off the rear tires more easily, more than you really ever used to. I mean, you’re still going to have to produce the lap times, so it’s not as though you can back off and ride around comfortably. If it’s oversteering badly, you’ll deal with it the best you can, but that also makes you more prone to mistakes. You’re going to be much more open to going too far in the brake zones, maybe ending up in the runoff area, or blowing past the apex.” 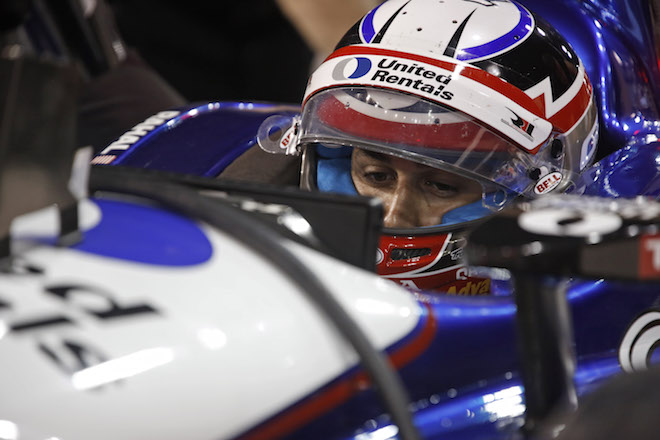 Like Dixon, Rahal [above] cautions against using wicked car control as a crutch this season. It might be fun to put on a drifting show, but the negatives will outweigh the positives.

“I think having fast hands will help a lot more now, but at the same time, what I see is that can also be a weakness,” he said. “If the rear balance is a weakness, you’re just covering up for it by having good quick hands and catching the slides all the time.

“There is that point where being up on the [steering] wheel will be the way to go, but there’s a limit in how far to take it. I’m not really sure the rear tires will even last to the end of a stint. A weakness of the chassis balance is going to show in the long run – even more exaggerated [than before] – and you can’t just drive around it the whole way and think you’re going to be fast for very long. Big oversteer problems are going to bite you, big time. And yeah, you can try to drive around it, try to live with it, but you’re going to go backwards pretty quickly.”

Watching drivers work their magic this weekend could be a highlight of the event. It will take a trained eye to capture all the rapid-fire turning and correcting, but it’s worth following as an emerging theme in 2018. Better still: the ones with the fastest hands can’t wait to hit the track and start playing with the oversteer…

“What has made it fun is the way that the weight distribution changes,” Power said. “You’ve taken a lot of weight off the back by tossing out the wheel guards. You’ve also moved the radiators forward and they’re slightly lower, some of the electronics are slightly lower, so it’s just a better car in that respect with moving the weight distribution more onto the nose.

“So when the rear snaps away, it doesn’t lose you lap time like it did before. The old car, with all that weight back there, when it actually got away, it was a huge moment with the big pendulum affect, and when it went on you, you weren’t really able to hold it.

“Now you have a car… yeah, less downforce, but also a much better weight distribution, less weight over the rear, so you can drive it on a slide a little bit more, and it’s more nimble. It just makes it more of a lively car. It’s just what I’ve been asking for.”