Among the growing number of new items on offer this season in the Verizon IndyCar Series, a nose-mounted camera has been added to the on-board entertainment package.

With the new universal aero kit bodywork, four of the five cameras sit in different locations than were found on the previous manufacturer aero kits. And while some reside in the same general areas – side mirrors and rear wing end plates – the nose cam is the only brand-new installation this season. In concert with the HD visor cam that IndyCar’s broadcast partners created in 2017, the nose cam takes another step for the series.

(Watch from James Hinchcliffe’s Honda as he follows Ed Jones.)

Tap the if you can “get down” with Nose Cam!
Ride along with @hinchtown tailing @edjonesracing into the pits at the #FirestoneGP. #INDYCAR
WATCH LIVE! https://t.co/SAdeSxADLx pic.twitter.com/TFQstPfnBK

“There’s five camera positions on the cars, which includes now the nose, and we have a lot of compelling vantage points to share with fans on television and on the live stream,” IndyCar chief marketing officer CJ O’Donnell told RACER.

Located at the tip of the nose, the low camera angle could become popular as passing attempts are made and, unfortunately, when contact takes place at the front of the cars with the cameras in position. 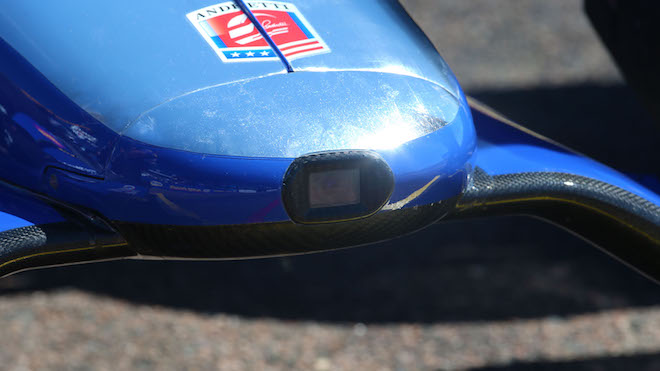 “Traditional camera placement works well, and it gives you a feel of what it’s like to be in the race, but with the helmet cam we have, the nose cam, and other views we can switch to, it provides the feel of actually being in the race,” O’Donnell added.

“There are some great vantage points that weren’t utilized in the past, so with the new bodywork, which was optimized to improve the racing, the new cameras we’ve put in place are there to capture them for our growing audience.”