Ryan Hunter-Reay suffered through a miserable season last year but is off to a fast start in 2018.

Winless and luckless in 2017, the 2014 Indianapolis 500 winner turned the fastest lap of Friday afternoon’s practice session for the Firestone GP of St. Petersburg with a time of 1m00.829s in his DHL Honda – just edging James Hinchcliffe’s best of 1m00.872s in the Arrows Honda. Four-time St. Pete polesitter Will Power was third quick with a 1m00.99s in the Verizon Chevrolet and the only other driver under 1m01s.

“Finishing first overall today is not a bad way to start the season,” said Hunter-Reay. “We’re still in the early days and will need to all put our heads together at Andretti tonight and figure out how we’re going to make these cars go faster tomorrow. I think everybody left today feeling like they left something on the table, ourselves included, but it’s nice to see the No. 28 DHL Honda up at the sharp end – right up in front. Hopefully we can carry that momentum into tomorrow and see what we have for qualifying.”

Four-time IndyCar champ Scott Dixon jumped up to fourth fastest in the late going at 1m01.100s and 2017 champ Josef Newgarden was right behind at 1m01.101s in the Hum Chevy for Team Penske. Alexander Rossi was sixth at 1m01.154s in the NAPA Honda and rookie Robert Wickens checked in at 1m01.219 in the other Schmidt Peterson Motorsports entry.

Rookie Matheus Leist, who set quick time in the opening morning session, wound up 12th overall out of 24 cars in his ABC Supply Chevy.

Turn 3 proved to be the tricky corner as rookie Rene Binder and 2016 champ Simon Pagenaud both escaped wild spins with minimal or no damage.

UP NEXT: There will be one more practice session Saturday morning at 11:10 a.m. ET prior to qualifying. 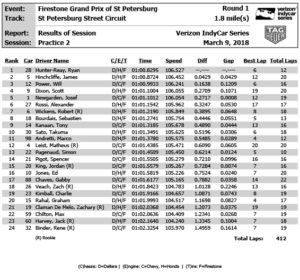