An update in technology with the display panels attached to every Dallara DW12 IndyCar has brought a new range of possibilities for communications between the Verizon IndyCar Series and its fans.

In its original guise from 2015, the panels made by the SPAA05 firm in Holland had the ability to show track position for each driver, and more uses were found like signaling when Push-to-Pass was activated, and functioning like a big stopwatch during pit stops to show how long each car was stationary.

To complement this year’s ambitious bodywork and electronics updates, Jon Koskey from IndyCar’s timing and scoring department was tasked with exploring new display panel options, and returned to SPAA05 for the solution.

The result is a shift from limited possibilities with the former panel to something that’s not too dissimilar from a Lite Brite toy. With a grid of more than 1000 little LEDs, the panels can present almost anything the series wants to show. Whether it’s the number of the car, it’s position in the race, or a preloaded image done in bitmap form, using the new panels for serious business or a bit of fun is at the disposal of Koskey and his team.

“The first rendition of the [2015] panel was more of your traditional, digital look, but it obviously had some restrictions on what you could put on it,” he told RACER. “But the task at hand was getting something new on the car and working within those [dimensional] boundaries.

“So we opted for doing a matrix display and decided to live within some boundaries as far as power goes, but we ended up going with a 38×35 pixel display. It’s a little bit better resolution than a Jumbotron or the Big Hoss screen at Texas. Those are around 10mm spacing. Ours are 4mm spacing on it. Now that we have this on there, we just came up with the grand idea of, ‘how can we put images on there?'” 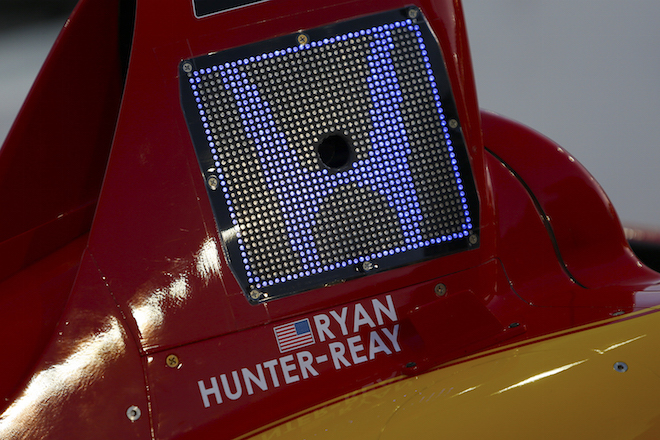 As the Phoenix open test demonstrated in February, the new panels can present anything that’s downloaded to each car. Although wireless transmissions are used by timing and scoring to switch to different images while the cars are stationary or on track, uploading new images is only possible with a cable attached on pit lane or in the garage.

“The images have to just be loaded onto the car, but we just set a spec of building a bitmap of 38×35,” Koskey continued. “We can spec an image into that, and we can load thousands of images onto it, and each image is assigned a ‘race rank’. The American flag is an ID200, and we can put an American flag on there when they’re on the grid for the national anthem. Then when they’re on the warm-up laps, as they’re going around each time, we can say which content can go on there – for example, the flag of the competitor that’s in the car, those things.”

Logos for engine suppliers Chevy and Honda were seen at Phoenix, and more creative uses for the panels are expected its full capabilities are explored. With a relatively fast refresh rate, the new panels could – with a significant number of images loaded into the system – present those images like a .gif animation and mimic the behavior of a short video.

“Really, the sky’s the limit. We’re tapping into something that hasn’t been done yet here, and I’m sure I’ll start getting a lot of feedback,” Koskey said. “But right now, we just want to make sure we got, other than putting the American flag on it and engine logos and all that, we’re going to step into this keeping the basics fans have become accustomed to and doing those things. 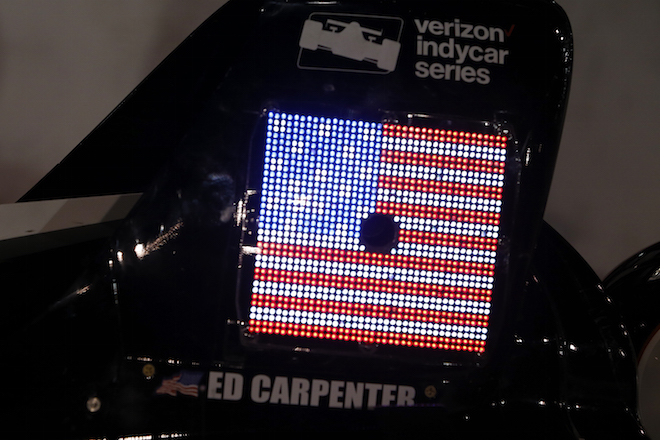 “We’ve got about 2500 laps on the display in testing, which was pretty good. They draw 75W per side, so 150W total, so we’ve worked with teams to make sure it isn’t drawing too much. Overall, we’ve just got a good plan to ease into it at the beginning of the season, and we’ll be taking full advantage of it, I’m sure, by Indy and beyond.”

The feeding of images to the panels has been a one-way process so far from IndyCar to its teams, and with Koskey’s group in charge of switching between those images, he wouldn’t be surprised if teams eventually ask to share the responsibilities.

“Those would be opportunities that we could go to the team and say, ‘hey, if you’ve got something you want to put up on there, here’s the specs you’ve got to meet on it’, and we could potentially throw something up there,” he said.

“There will be a little bit of a learning curve with it, but I would never dismiss that opportunity. Teams are gracious enough to work with us and put these on the cars. Certainly, we’d like to work with them to put some content on there for them, and if it becomes something that’s valuable to them or their sponsors, those conversations could be had with those above my pay grade…”

As yet another unique offering from the series, Koskey is understandably proud of the little Lite Brites.

“It’s great to bring more innovation to the series,” he said, “and for IndyCar to be a leader in the sport.”