With a top speed of 280 km/h (174mph) and the ability to travel double the distance of the current Formula E car, the Gen2 car eliminates the mid-race car swap from Season Five onward.

“It’s incredible to see the progress made in just four years – to double the range of the car and increase the power output is a fantastic achievement,” Todt said.

“With the support of so many manufacturers, Formula E will continue to push the development of electric vehicle technology, and this car is an important milestone in this journey.” 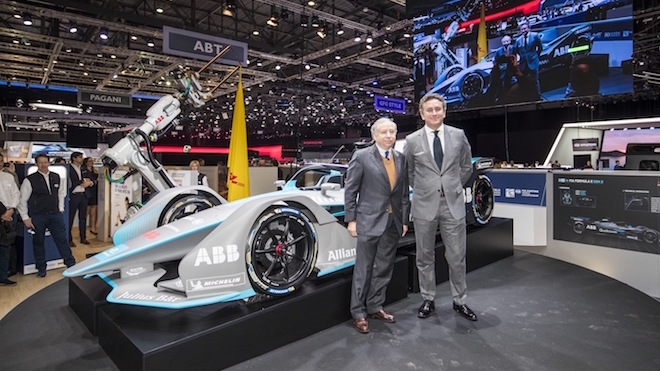 The Gen2 will feature a new Halo head protection device, which forms part of the chassis. With a strip of LED lighting, fans will be able to follow the strategy of their favorite team or driver – with the lights indicating different power modes and other race-related information.

“This is the first time I’ve seen the complete car in the flesh and it’s even more sleek and spectacular up close. If you were to draw a racing car from scratch and base it purely on its looks, you’d come up with just this design,” Agag said.

“This model visually differentiates Formula E from any other single-seater in motorsport today. When people see this car they will say it’s Formula E, it’s the future.”

Added FIA technical director Gilles Simon: “Formula E is a fascinating mission from a technical perspective – it gives us the opportunity to create something completely different to anything else in motorsport, and developing innovative technologies at the forefront of the electric revolution that is happening in the automotive industry is really exciting.

“To make some something faster with double the efficiency was a great challenge, and I think it’s going to be very spectacular when it takes to the track in season five.”