Barnhart glad to be back as an IndyCar competitor

Barnhart glad to be back as an IndyCar competitor

Former IndyCar president Brian Barnhart will reach another career milestone this weekend when Gabby Chaves and the No.88 Harding Racing Chevy program participate in the Firestone Grand Prix at St. Petersburg. In his newest role as Harding Racing’s president, the IndyCar lifer is back on the shop floor, but his experience as an Indy 500-winning mechanic won’t lead the team to prosperity.

Having accepted a new team-based position unlike anything else he’s done in the sport, Barnhart will have the likes of Team Penske president Tim Cindric and Chip Ganassi Racing managing director Mike Hull to go toe to toe with as he attempts to steer Mike Harding’s program to the front of the grid. It could prove to be his biggest challenge to date.

“It’s certainly an adjustment because the team side has changed since I was last here,” he told RACER. “There’s some carryover aspects for sure, but it’s just a different scale with the amount of people, and different management structures, and different positioning on the team aspect to what I come from, so that’ll be a steep learning curve for me as well.

“But being back on the competitive side – that’s part of what excites me a lot about it this position. You couldn’t be in IndyCar without being a competitive person by nature, I don’t think, or at least be a successful one, and so that competitive desire was always burning there, even though, on the IndyCar side of it, you still want to get back in and compete, and I’m excited about that.”

Barnhart and Harding are learning at the same exponential rates as the team embarks on its first full-season campaign. In three outings last season with Chaves behind the wheel and Larry Curry running the operation, Harding Racing demonstrated great potential at the Indy 500, Texas Motor Speedway and Pocono. Proving it can be a success at every round, and for many years to come, is why Harding hired Barnhart.

“I think [Harding’s] in it for the long haul. He certainly convinced me of that after having been with IndyCar as long as I was. When I saw what his vision was and what his plan was moving forward, certainly made me want to be a part of it,” Barnhart continued.

“The thing that I really like about Mike is, as much as he’s passionate about it, he’ll be the first to admit he’s not deeply knowledgeable about it yet, so it’s going to be fun to help communicate with him, to help educate him, and teach him certain aspects of the sport.

“He very much wants to do this for a long time and be involved with these guys and he’s got a shared passion just like a guy like Michael Andretti does and Chip Ganassi and Roger Penske. And Mike wants to do as well as them, and emulating their success is our goal.” 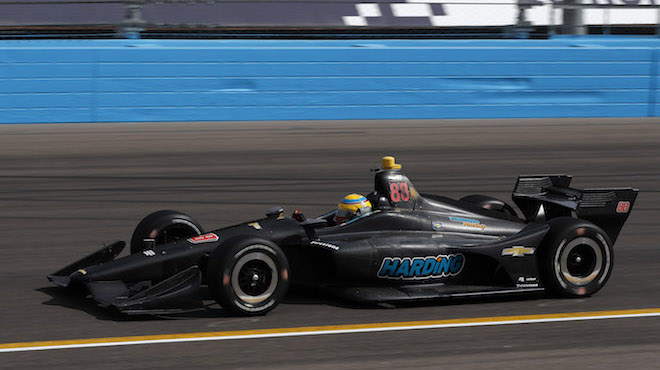 As Barnhart has found during his first few months on the job, Harding isn’t going into 2018 with modest expectations. Tempering his team owner’s enthusiasm for immediate results with the realities that come with taking on the established teams could become the hardest part of Barnhart’s job.

“I think that is absolutely one of the most critical components of this moving forward,” he said. “Because of his passion, he is demanding. Mike’s a very successful businessman with The Harding Group and Harding Transport and his other business ventures, so he’s going to demand, and rightfully so with his investment, he’s going to demand results here as well, and we’re going to need to deliver on those for him.

If Harding Racing is going to become a fixture in the IndyCar paddock, it will take more than race wins by Chaves to secure their future. In a return to an old IndyCar tradition, Harding is funding his passion as an extension of his businesses, and Barnhart knows that will need to change rather soon. Finding corporate partners to dress the No.88 in their colors will be a vital step for the team’s general manager to orchestrate. From top to bottom, Barnhart’s new role isn’t for the faint of heart.

“The biggest thing, to me, is I certainly want to help Mike to be successful on the racetrack, but I also need to help him off the racetrack,” he said. “Generating some partnerships and some sponsorships with him is going to be at the top of the list, too. There’s a lot to do, and still go racing this season, without the luxury of time.”

Trans Am 7m ago ET