The “Freaky Fast” slogan on the side of Kevin Harvick’s car couldn’t have been more accurate Sunday at Las Vegas Motor Speedway.

Harvick never gave the field a chance in the Pennzoil 400 as he rolled to his second straight win in dominating fashion. Grabbing the lead on the second lap of the race, Harvick was unchallenged throughout the event, only losing the top spot during green flag pit stops and on one slow stop from his Stewart-Haas Racing crew.

But after taking the lead back for the final time on Lap 237, Harvick drove off by almost three seconds. Kyle Busch charged to second inside the final 20 laps but never mounted a challenge on Harvick.

In all, Harvick paced the field for 214 of 267 laps and won all three stages. And throughout his wins at both Atlanta and Las Vegas, Harvick led a combined 395 laps.

“Just really proud of everybody on our Jimmy John’s/Busch Ford for just doing a great job with the racecars,” Harvick said in victory lane. “These last two weeks we’ve just hit on what we needed to, and really this stems back to last year when the mile-and-a-half program got so much better at the end of the year, and they’ve done their homework on a number of things.” 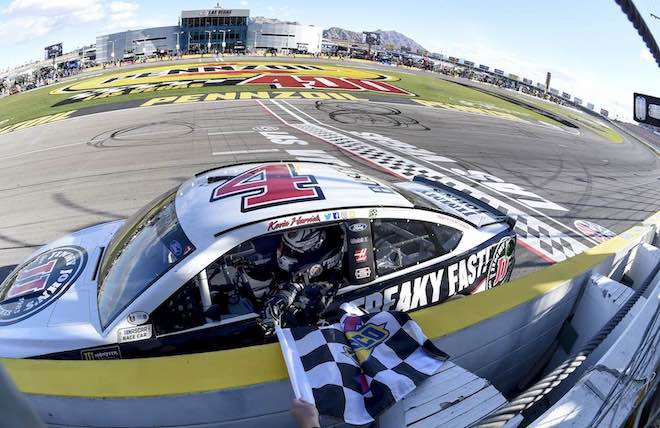 The victory is the 39th of Harvick’s career in the Monster Energy NASCAR Cup Series and his second at Las Vegas. It is also his 100th NASCAR national series win.

“That’s pretty awesome,” said Harvick. “It all happened so fast over the last couple of weeks it really lets you reminisce about a lot of things you’ve done in the sport. Winning last week and being able to put some closure on 2001 in Atlanta and winning 100 races is something I never thought I would do.

“They’re hard to do, I can tell you that. I’ve been fortunate to sit in a lot of good racecars.”

Aric Almirola rounded out the top 10 as the first driver off the lead lap. Cole Custer finished 25th in his Cup Series debut.

“Our M&M’s Camry was really strong the last 100 laps of the race. Early on just having to start the race on our qualifier [tires] was just really bad for us and then we just over-tightened, over adjusted for the second run,” said Busch. “From there we were just making small tweaks on it to get it back and she was really fast, rolling really good the last 100 laps or so.

“Just no catching that 4 [Harvick] – they were just on rails today and they were lights out. I don’t know what we need to do catch up to get better to those guys, but certainly, we’ve got some homework to do.”

There were four cautions for 29 laps and 11 leads changes throughout the day.