For the second time this season, Mahindra Racing’s Felix Rosenqvist will start the race on pole after setting a time of 1m01.645s in the Super Pole shootout. Clinching the Julius Baer Pole Position means an extra three points for the Swede, who currently sits second in the standings. Starting the race at the front of the pack, this could be Rosenqvist’s chance to take the lead back in the championship.

Starting in second will be MS&AD Andretti Formula E’s Antonio Felix da Costa. With a sixth-place finish in Hong Kong his best result so far in Season Four, Da Costa will be looking to maintain his position at the front of the pack for the duration of the race.

DS Virgin Racing’s Alex Lynn recovered well after his crash in the second free practice, logging the third fastest time in Super Pole. But despite his efforts, the Brit will start the race in thirteenth after receiving a 10-place grid penalty for a swapped gearbox ahead of the race.

For NIO Formula E Team driver Oliver Turvey, it’s not quite the front row for last year’s poleman but the British driver moves up to start the race in third place after Lynn’s grid penalty.

A solid lap from Renault e.dam’s Sebastien Buemi put him through to Super Pole after setting the fastest time in Qualifying but it wasn’t enough to take him to the front of the pack. Starting the race in fourth, Buemi will be looking to place on the podium to increase the French manufacturer team’s chances of winning its fourth and final championship in the all-electric racing series.

With the top ten made up of seven different teams, once again, it’s all for the taking at the 2018 Mexico City E-Prix. 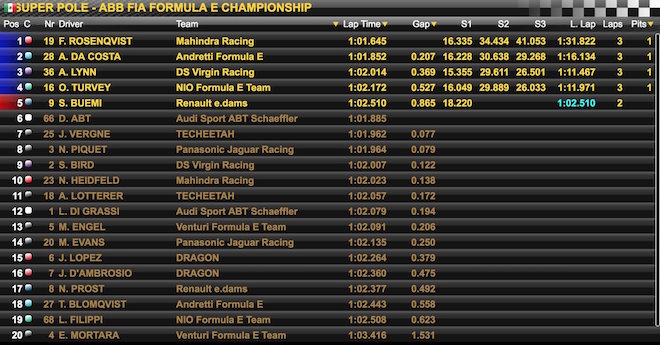