Low temperatures, snow and rain limited the amount of mileage teams completed over the first four days at the Circuit de Barcelona-Catalunya, and laps that were possible took place in low-grip conditions. The situation has placed added emphasis on next week’s test but also requires teams to rely on their simulation tools.

Asked if it’s harder to deal with compared to the bigger teams, Steiner agreed: “I think you can equate it like this.

“The big teams do a lot more work on testing, so they lose as much as us because with all their resources they do more in testing. But for sure to get to Melbourne always the smaller ones are always hurt more than the bigger ones because they just have more resources. It’s normal, whatever happens. 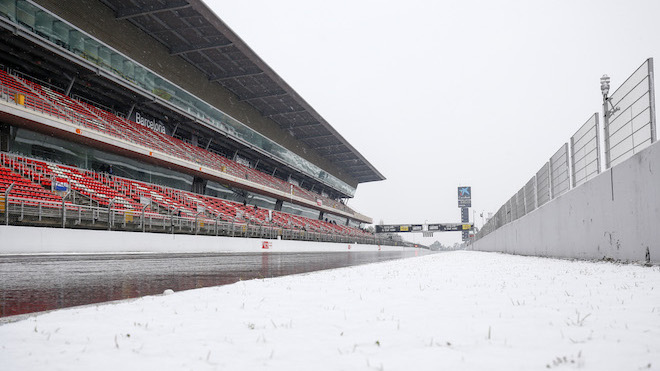 “I’m actually positive next week will be a better week. It seems to be there will be no rain, the temperature goes up to normal – 16 degrees, 17 degrees – and then you can go back to normal.”

And Steiner doesn’t expect the grid order to be shaken up at the first race in Melbourne if teams are unable to make up for lost time during the second test next week.

“No, the big teams will always have an advantage. They can just do much more at home. They gather the basic data of the car, which you can still be at with data, and then do the development… instead of doing it on the car, do it on the simulator.”

Having nearly hit 100 laps on Thursday as weather conditions improved on the final day, Steiner is at least encouraged by the baseline Haas has to work from next week.

“I think it’s a good end to a difficult testing session. The first few days were compromised by the weather, but we got 96 laps in. We made some progress and we understand the car a little bit better. Next week we need to start from where we are now, get better, and then work toward being ready for Australia.”