“If you’re talking about sports car racing, you’re talking about Daytona, Sebring, Le Mans, Petit and those races that are known worldwide,” said the now 24-year-old Brazilian. “After winning Daytona and immediately coming here at Sebring – which if I’m not wrong, I was the first guy winning both on debut and the first Brazilian, probably to win back-to-back on those two races.

This week, Derani was back at Sebring International Raceway for two days of testing in preparation for the Mobil 1 Twelve Hours of Sebring on Saturday, March 17. He will co-drive the No. 22 Tequila Patron ESM Nissan DPi with van Overbeek and Nicolas Lapierre, the only lineup in the field that includes three former overall winners at Sebring (Lapierre won the race in 2011).

While he couldn’t point to one specific reason why he and the team won, he remains proud to see the sign on the building behind pit lane at Sebring that signifies the team’s victory in 2016 with its Honda-powered Ligier prototype.

“It’s a place that’s so special,” Derani said. “It’s such a difficult track that I think not only you have to have a great group of guys working for you to be able to achieve a victory here, but you kind of have to be chosen to win and overcome all the difficulties that this race has. I think we were one of the lucky ones, honestly, to be able to be in a position to fight for this victory.

“When I won here, myself and Johannes, we had to fight really hard for that win. Today, to look up and see our names up there, it’s quite special. It’s a very difficult race, especially because it beats the hell out of you. You get really tired in the end of the race. It’s a special one to win. I can’t really point out one single reason why we won the race. It’s such a difficult race. You need a great group of people around. I think that’s the reason why we won this race.”

Derani also was pleased with the team’s progress throughout Thursday’s full day and night of testing. There were able to take full advantage of 10 hours of available track time.

“It’s been going well, better than expected,” he said. “Yesterday was a day that we managed to get a lot of information. Most importantly, we ran a lot. We were out on track, and that is really good for us. Hopefully, this work is going to pay off really, really soon.”

Corvette Racing has ‘good relationship’ with Twelve Hours of Sebring

Celebrating its 20th season of competition in 2018, Corvette Racing has enjoyed considerable success at several venues in the IMSA WeatherTech SportsCar Championship. However, there’s no place like Sebring International Raceway for the two-car GT Le Mans class team.

Next month, the team will be looking for its fourth consecutive Sebring GTLM victory. It won last year with Jan Magnussen, Antonio Garcia and Mike Rockenfeller in the No. 3 Corvette C7.R, two years ago with Gavin, Tommy Milner and Marcel Fassler in the No. 4 and in 2015 with the No. 3 co-driven by Garcia, Magnussen and Ryan Briscoe, who now drives the No. 67 Ford Chip Ganassi Racing Ford GT.

“Sebring certainly holds a lot of great memories for Corvette Racing, some very interesting memories, some not so interesting,” said Corvette Racing program manager Doug Fehan. “Early on when we started here, this was our Bermuda Triangle. Back in 1999 and 2000, we couldn’t do anything right here. No matter what we did, it turned out to be disastrous.

“But as usual, we kept our shoulder to the wheel, heads down and have developed a pretty good relationship with the track right now. The cars like it here. This is a very difficult racetrack from the standpoint of durability and reliability, everybody knows that. If you can win here in 12 hours, you can win anyplace with the car. The drivers like the track because it’s fast. It takes a great deal of skill and experience to be able to run the full 12 hours without hitting anything, without breaking anything and without running off the racetrack. 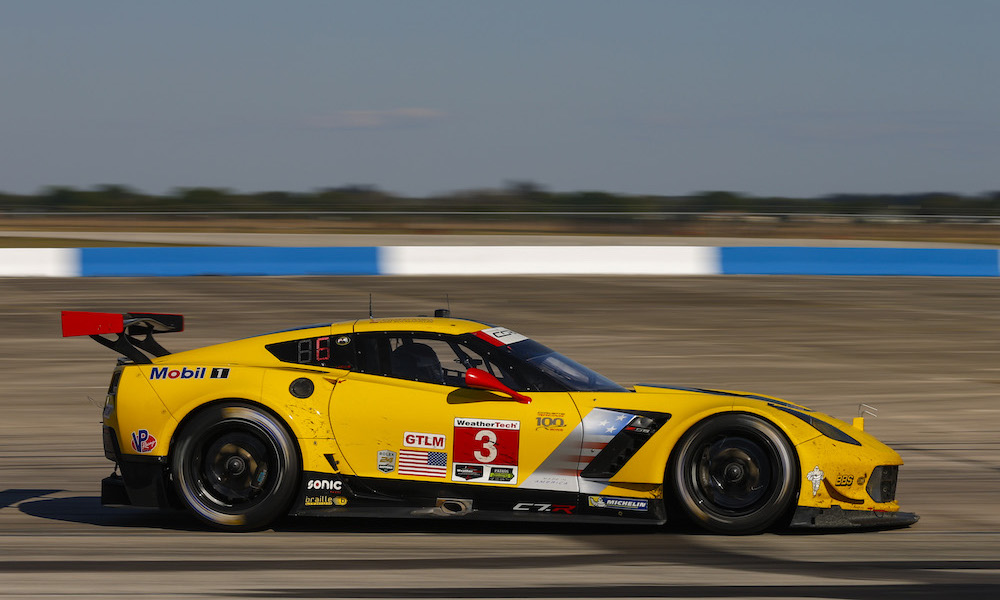 “I think when you put all those things together, that has really contributed to our success here. Just the fact that we’ve been here, this is our 20th year here, when you have that level of continuity, it certainly serves as a great benefit when you’re going up against the competition.”

While Sebring is the venue where Corvette Racing has had the most success, the team also owns eight victories in the 24 Hours of Le Mans. Last month, it was confirmed that Corvette Racing again will have a pair of entries in the GTE Pro class at Le Mans to chase win No. 9.

Sebring has long been considered by many to be one of the best racetracks in the world to prepare for Le Mans. But Fehan offers a word of caution.

“You need to be prepared for this event and this event alone. Don’t. Lose. Focus. This racetrack is so unique in so many ways. You can have a setup here on a Thursday afternoon test session and it’s the best setup you’ve ever had and you can show up on Friday morning with a test session and it’s like you’ve never been here before and nothing has happened to the track. The temperature’s the same, it looks the same, you’re always chasing it here.

“That’s the challenge that not only develops the car, but it helps develop the team. You’ve got to understand what Sebring is. It is totally unique. There is no other place at which we race that is like Sebring, that is why it requires the level of focus that you have to give it.”

It’s been a whirlwind couple of weeks for Marc Miller and Till Bechtolsheimer, but in the best sort of way.

The co-drivers were announced on Wednesday for CJ Wilson Racing’s move up to the IMSA WeatherTech SportsCar Championship GT Daytona class in the No. 36 Acura NSX GT3, which the team will field for the three remaining rounds of the Tequila Patron North American Endurance Cup.

“For me, there wasn’t a lot of fanfare,” Miller said. “We’ve talked about this for the better part of eight months probably. This was kind of always a plan and after late November, realizing we probably weren’t going to make it to the Roar, and into December realizing I’m not going to drive anything at Daytona. It was just good news by the time we were leaving Daytona the likelihood of us putting something together for Sebring, which still wasn’t really firm until ten days to two weeks ago. The excitement level’s been very short-lived.”

The short-lived excitement turned into a full-on focus for the Mobil 1 Twelve Hours of Sebring Presented by Advance Auto Parts next month, starting with the two-day IMSA-sanctioned test at the iconic circuit, which wrapped up its final session Friday afternoon. The Sebring test followed a brief shakedown in Texas last week.

Miller has previously contested the 12-hour race at Sebring and won the 10-hour Motul Petit Le Mans in the GTD class in 2016. But this will be Bechtolsheimer’s first start in the WeatherTech Championship, after co-driving a Porsche Cayman GT4 with Miller for CJ Wilson Racing the past two seasons in the IMSA Continental Tire SportsCar Challenge.

“I’ve not driven anything close to a GTD car before,” said Bechtolsheimer, whose racing background primarily consists of vintage car racing. “The first time driving it properly here at Sebring is kind of fitting because the first time I drove a car on slicks was at Sebring two years ago in moving to Continental Tire, which was at least as daunting at the time as moving into GTD now.

“The first time I turned a lap or two in the car, even though I was just trying to figure out where all the switches were and so on, I straight away felt that this is a car that’s going to be fun to drive. It’s going to take me time to build up to be on pace, but it’s a confidence-inspiring car and its yeah, it’s a lot nicer than perhaps I was expecting.”

This shot is why @andrislaivins and the team have worked themselves to a standstill for the last eight years! It means we have arrived. We have so much more to do but as @TheNotoriousMMA once said, we’re not here to take part, we’re here to take over! pic.twitter.com/QntEBgeV2s

Miller made his confidence in Bechtolsheimer clear and pointed out that his co-driver’s skillset is more than what meets the eye.

“When I met Till, one of the things that I noticed straight away was his car control and his abilities were just kind of untapped,” Miller said. “But completely there because he’s been doing all these things in pretty tough situations and this would be a piece of cake once he got used to it. He’s proving that by certainly getting on pace pretty quickly, considering his experience level in these types of cars.”

It’s hard to imagine bringing a new car to one of the toughest endurance races in the world, but the drivers and team feel they are headed in the right direction following the two-week whirlwind.
“I think our pace here during the test has been pretty good and we’ve learned a lot about the car,” Miller summarized. “That’s what we’re here to do.”