Mazda Road to Indy season kicks off with Spring Training

Mazda Road to Indy season kicks off with Spring Training

At least 15 different nationalities are expected to be represented, highlighting the credibility of a program which offers opportunities for drivers to progress from the grassroots to the pinnacle of the sport in North America – with Mazda Scholarships at every level.

Spring Training will represent the first time a full field of the exciting new Tatuus PM-18 Pro Mazda cars will be on track at the same time. It will also provide one final chance to lay down a marker in advance of the opening races of the 2018 campaign on the Streets of St. Petersburg, Fla., in conjunction with the Verizon IndyCar Series, on March 9-11.

Veterans set to lead the way in Indy Lights
The top tier on the ladder, Indy Lights, seems set for another wide-open title-chase in 2018. Last year saw seven drivers from four teams share the victory spoils before Kyle Kaiser claimed the coveted Mazda Scholarship, valued at $1 million, to ensure entry into a minimum of three Verizon IndyCar Series races in 2018, including the 102nd Indianapolis 500. This year promises more of the same, especially since many of the primary elements remain unchanged.

Santi Urrutia, who has finished second in each of the past two years after winning the Pro Mazda crown in 2015, will be testing with defending Indy Lights Team Champions Belardi Auto Racing alongside Aaron Telitz, who succeeded Urrutia as Pro Mazda champion in 2016, then book-ended his rookie Indy Lights season with victories on his debut and in the season finale.

“To be honest I always consider myself a title favorite no matter what,” says Telitz. “I don’t go into a season of racing without the highest of expectations. In a way I had a great rookie year as I had extreme highs and lows. So I’ll be able to draw back on what was right when things were going well, and when things were bad I’ll be able to correct them this season.”

Herta’s tally of two wins and a series-high seven poles last year (just one shy of the record, which his father, Bryan, shares with fellow former champions Townsend Bell, Thiago Medeiros and Ed Jones) stands the teenager in good stead as he seeks a championship of his own alongside youthful team co-owner George Michael Steinbrenner IV, grandson of the legendary New York Yankees owner.

Juncos Racing, which has won the Indy Lights championship in two of the past three years with Spencer Pigot and Kaiser, will continue to run Victor Franzoni, from Sao Paulo, Brazil, who grasped a career lifeline one year ago with a last-minute opportunity to join the team in Pro Mazda. Despite running on a very tight budget, Franzoni clinched the title with three successive wins to close out the season, thereby earning the right to carry the distinctive Soul Red Mazda Scholarship livery onto the final step of the Mazda Road to Indy ladder.

“It’s a huge honor,” says Franzoni. “Representing Mazda will be one of the best things of 2018, for sure. I don’t think the pressure will increase because my pressure is to win the championship in any color, but I’m excited about what I will learn representing a big brand like Mazda and hoping to do a great job inside and outside the track.” 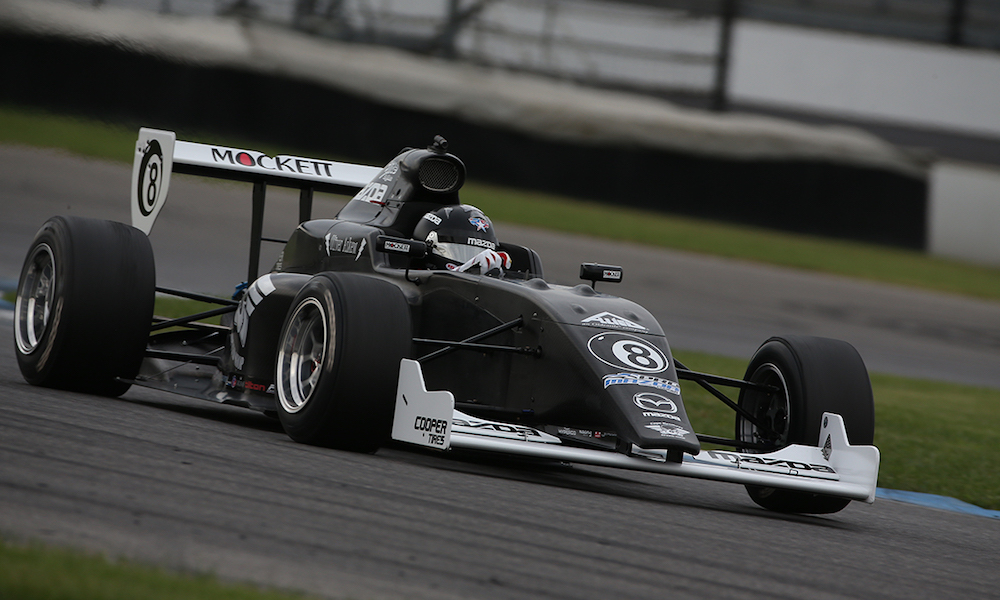 The introduction this year of the new Mazda-powered Tatuus PM-18 chassis to Pro Mazda completes the revitalization of the entire Mazda Road to Indy development ladder. The process began in 2015 when the Dallara IL-15 debuted in Indy Lights and continued last year with the Tatuus USF-17 in USF2000. In common with the other two new cars, early indications from testing suggest the PM-18, which replaces the Elan/Van Diemen/Crawford chassis first introduced in 2004 and utilizes the same basic chassis and components as the USF-17, will be every bit as popular with drivers, teams and fans alike.

“It’s a super-fun car,” says Robert Megennis, from New York, N.Y., who is stepping up from USF2000 to Pro Mazda with last year’s championship-winning team, Juncos Racing. “It’s really fast and the perfect transition up from USF2000.”

Positive comments have proliferated as new teams and drivers come to grips with the new car, and there is every reason to expect a far more open campaign than in 2017, which boiled down to a straightforward head-to-head battle between Victor Franzoni and Anthony Martin.

Three teams, BN Racing, DEForce Racing and Canadian-based Exclusive Autosport, have added Pro Mazda cars to their existing USF2000 stables, while the addition of Italian team RP Motorsport Racing, which has reaped much success in the Euroformula Open Championship and the World Series Formula V8 3.5 in recent years, adds even more depth to the field.

Also stepping up from USF2000 are the top three protagonists from 2017 – Oliver Askew, from Jupiter, Fla., Dutch teenager Rinus VeeKay and Canadian Parker Thompson – all of whom are expected to challenge for the championship.

Askew earned his opportunity in USF2000 after claiming the inaugural Mazda Road to Indy USF2000 $200K Mazda Scholarship Shootout in 2016. He then won seven races on his way to the championship last year and has every intention of continuing his winning ways with Cape Motorsports and chasing yet another Mazda Scholarship, worth $790,000, to ensure graduation to Indy Lights in 2019.

“Everyone has excitement built up from the long off-season, but I plan to keep a level head and approach the season like I have been since I entered the Mazda Road to Indy last year,” says Askew. “I have no doubt that we will have another competitive package to fight for the Pro Mazda championship.”

Los Angeles-based Russian Nikita Lastochkin will remain with the Cape team and has shown well in pre-season testing.

Thompson will remain with Exclusive Autosport for his graduation to Pro Mazda, while Chicago’s David Malukas also will make the step up with BN Racing alongside Pittsburgh, Pa.’s Kris Wright, who contested a partial season in 2017.

Other contenders will include English Formula Ford standout James Raven (DEForce Racing) and countryman Harrison Scott, a dominant winner of last year’s Euroformula Open series with 12 wins from just 14 starts, who remains with RP Motorsport – alongside Italian newcomer Lodovico Laurini – to share their first taste of the sport in North America. 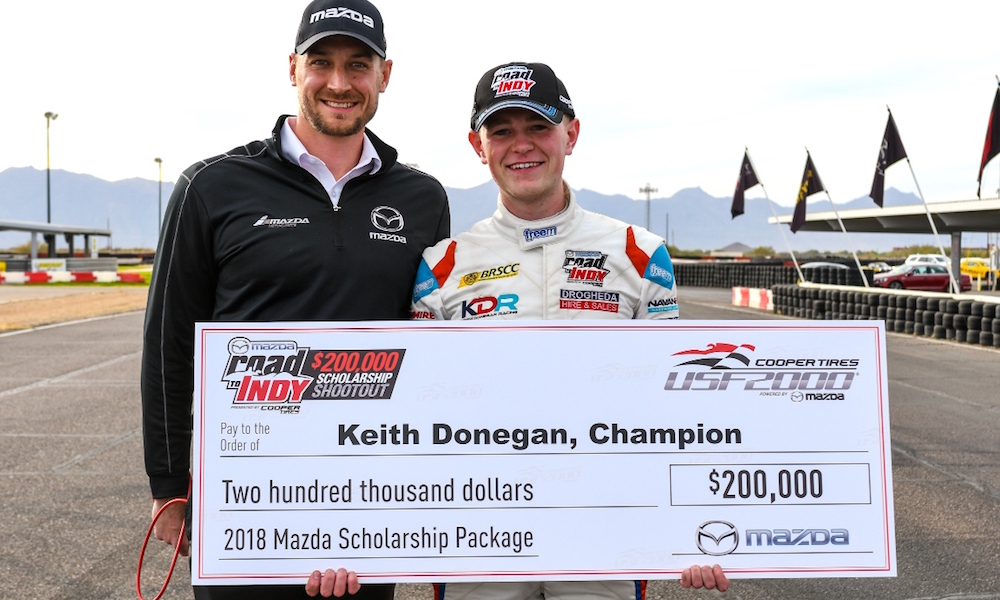 A stellar field of talented youngsters from at least 10 different countries is seeking to follow in the footsteps of Askew, who took USF2000 by storm in 2017 to claim the $325,000 Mazda Scholarship and graduate into Pro Mazda for this year. Prime among them will be Keith Donegan, from Dublin, Ireland, who was awarded the second annual $200,000 Mazda Scholarship following a hard-fought shootout last December at the Bob Bondurant Racing School in Arizona.

Donegan, who earned his opportunity to contest the shootout during a breakthrough season in the British Formula Ford 1600 Championship, which included a second-place finish in the famed Formula Ford Festival at Brands Hatch, will carry the distinctive Soul Red colors on his ArmsUp Motorsports Tatuus-Mazda USF-17. Donegan will be joined at the Wisconsin-based team by long-time karting star Sabre Cook, from Grand Junction, Colo., at the test.

“I know it will be tough to win the championship in my first year racing over here but I’ve a great team around me and a lot of people who believe in me so that always helps,” says Donegan. “I’m giving myself every opportunity to win so I’ll keep doing what I do and pushing and see what happens.”

The depth of talent Donegan will face is impressive. Wisconsin-based Pabst Racing, which claimed its first Team Championship in 2017 and guided VeeKay to second in the drivers’ standings, will return with a four-car attack comprising USF2000 veterans Kaylen Frederick, from Potomac, Md., Brazilian Lucas Kohl and Guyanan Calvin Ming, plus 16-year-old Swedish karting grad Rasmus Lindh.

DEForce Racing, too, has plenty of experience in its camp with returning drivers Kory Enders, from Warwick, N.Y., and Colin Kaminsky, from Homer Glen, Ill., alongside Mexican rookie Jose Sierra.

Darren Keane, from Deerfield Beach, Fla., also has high expectations as he returns to Newman Wachs Racing after a promising partial campaign in 2017. Keane, who set the pace in the traditional Chris Griffis Memorial Test at Indianapolis last fall, will be joined by English-born Singapore resident Oscar DeLuzuriaga and F4 graduate Max Piechel, from Edina, Minn.

Team Pelfrey also will be strongly represented. Bruna Tomaselli, from Brazil, is keen to continue her good progress in 2017, alongside rookies Kyle Dupell, from Portland, Ore., who stood out in the karting ranks, and South African Julian Van der Watt, who dominated his nation’s Formula 1600 Championship last year and will be making his North American debut.

BN Racing, which burst onto the scene last year with rookie David Malukas, returns with another rookie, Russell McDonough IV, from Arkansas, and F1600 race winner Zach Holden, from Greenfield, Ind., while Exclusive Autosport, another standout debutant team in 2017, will field at least two cars for veteran Canadian Jayson Clunie and young Mexican Manuel Cabrera, who earned a ticket to last year’s MRTI Shootout by virtue of winning the Formula Panam crown.

In addition, Mathias Soler-Obel, from Bogota, Colombia, will step up from F4 with the brand-new family-run SOL.O Racing team.

And then there’s St. Petersburg, Fla.-based Cape Motorsports, which is chasing a remarkable eighth consecutive USF2000 championship. After originally announcing their intention to concentrate on Pro Mazda with Askew, brothers Dominic and Nicholas Cape confirmed yesterday that they will continue in USF2000 with another rising Florida star, Kyle Kirkwood, who dominated last year’s U.S. Formula 4 Championship with the Cape team.

“I am extremely excited for this year,” says Kirkwood. “Yes, it will be all new to me but it will be the same for most of the drivers, except a select few. If anything I have an advantage with the relationship already built with Cape Motorsports.”

Spring Training will begin on Friday, February 23, with an all-day test for Indy Lights on Homestead-Miami’s 1.5-mile oval, followed by two days of running for Pro Mazda and USF2000 over the weekend on the 2.21-mile road course and then a final day on the road course for Indy Lights on Monday, February 26. Live timing and scoring for all sessions will be available on the respective series’ websites, indylights.com, promazda.com and usf2000.com, on racecontrol.indycar.com as well as the Mazda Road to Indy TV App.