Great chemistry a sign of things to come from RLL

Great chemistry a sign of things to come from RLL

Something remarkable has been achieved with the addition of a proper teammate for Graham Rahal.

As a one-car operation from 2015-2017, his Rahal Letterman Lanigan team played the role of disruptors to the IndyCar establishment. Five wins and a trio of top six championship finishes spoke to the talent contained within the program, but moving into a new role as serious title contenders was going to be a problem with Andretti Autosport, Chip Ganassi Racing and Team Penske stacking the top 10 with solid entries.

Using the recent Phoenix Open Test as a guide, the medley of RLL returnee Takuma Sato and Rahal should cause concern for the larger teams as the all-important ingredient – technical chemistry – has been established from the outset. With two fast cars and a pair of drivers working in tandem to achieve something special, a rise in expectations will be the new norm for RLL.

“I think Takuma is a great addition to our program and you can tell already he’s a pretty technical guy in the way that he thinks and the way that he looks at the car,” Rahal told RACER. “Obviously, clearly, clearly has a ton of experience, right? So, he’s going to be a guy that fits the mold extremely well to come into our group and to have a lot of success.

“And he’s already a powerful influence on everybody else because he is pretty sure of what he wants and what he needs and if he’s comfortable, it becomes a lot easier to make better cars and have more pace.”

Leading every session at Phoenix was clearly impressive, but the fast laps turned by Rahal and Sato said more about the relationships between the drivers and their engineers than anything related to the one-mile oval. RLL’s oft-documented engineering corps have made all the different for Rahal since 2015, and with Sato in the mix, the same approach has been applied to the Indy 500 winner’s program.

If there was a question to answer during pre-season testing, it centered on the shuffling of RLL’s race engineers as Rahal’s man Eddie Jones moved over to Sato’s No. 30 Honda and Tom German stepped up to take Jones’ place on Rahal’s No. 15. Despite their limited number of outings together the Rahal/German and Sato/Jones combos have also established instant chemistries.

“Takuma and Eddie fit right in together, and I think Eddie’s going to help Takuma a lot,” Rahal continued. “We’ve always known that of all the things to work on, Takuma has certainly never lacked speed. And where I think Eddie can come in is he can take a driver who is like that and get the finishing results and everything else out of them.

“I was talking to [Sato’s former A.J. Foyt engineer] Don Halliday at Phoenix, and I think Eddie is a very similar mold to Don. Very calculated, very calm, a calming influence on the driver, and ultimately what that allows to happen is that they get the most out of their guy. So that’s always really cool to see, and I think Eddie can be and will be that guy for Takuma.”

Following his strongest body of work to date in 2017 with Andretti Autosport, Sato’s challenge will be to improve on the eighth-place finish he earned in the Drivers’ championship. For Rahal, whose best work came in 2015 with fourth overall in the standings, he and German will need to reach a new level in order to knock off the rest of the title contenders.

From what he’s seen so far, the signs are encouraging.

“There’s no doubt that Tom is a different breed than Eddie, but that’s not good nor bad,” he said. “They’re both very different in their styles, and they both work really well and efficiently. And by that, Tom and I, certainly I feel like right away have clicked. Tom is, for whatever reason, a guy that gives off a lot of confidence to his driver because he’s very sure of what we’re doing.”

“What I like about Tom for my style is he’s super responsive when I’m in the car, so if I say, ‘hey, I’ve got X, Y, or Z things happening,’ some engineers I worked with in the past would come back with, ‘oh well, let’s work through a process. Let’s do this. Let’s do that.’ Blah, blah, blah, and it can take seemingly days to get a change done,” he added. 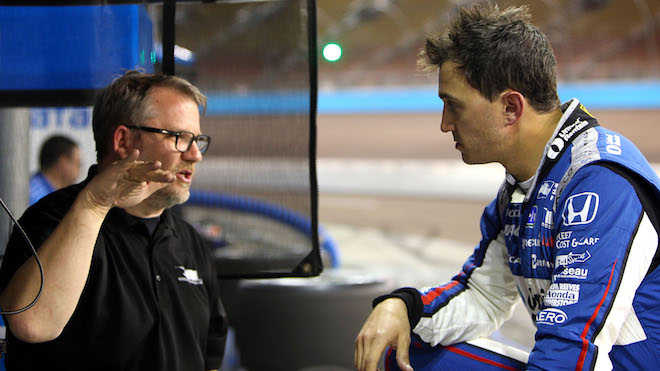 “Tom is very different in that sense. If I’ve got things going wrong, well, Tom’s going to change it right then and there and it might not be one change, it may be 10 things at once, but that’s kind of okay to me because for me it works. We’re on the same page. We get what we’re trying to do very quickly, and I think it works quite well. And Eddie’s obviously a guy who can have a great influence on his drivers and get a lot out of them.”

One thing that has annoyed Rahal in recent years is seeing other teams referred to as “powerhouse” organizations, all while his RLL outfit has often humbled the bigger programs by the end of the season. On its current path, the powerhouse label should be applied to RLL well before the 2018 championship concludes.

“I’m not ready to make any declarations or statements,” Rahal said, “but I think we’ve got something good to work with here.”

Trans Am 7hr ago ET