Aric Almirola was half a lap from winning the 60th Daytona 500. He wound up with a destroyed racecar and making a visit to the infield care center instead.

Leading the field down the backstretch on the last lap, Almirola first threw a successful block on Austin Dillon, who had a run going on the outside. But, still with a head of steam, Dillon forced the issue on the No.10’s back bumper and the two made contact going into Turn 3. 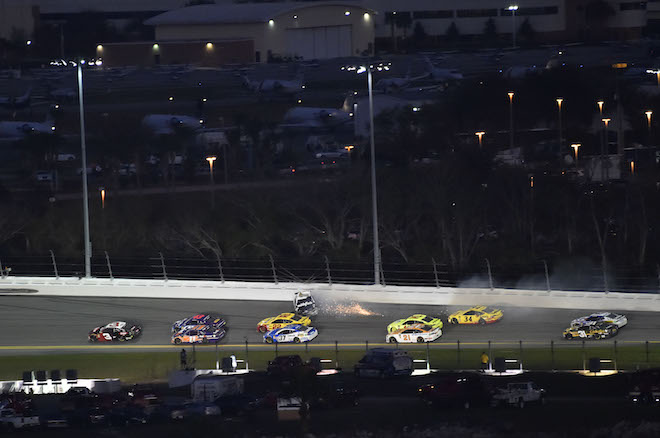 “Ha! He’s not driving too aggressively, he’s trying to win the Daytona 500 just like I was,” Almirola told reporters outside the care center. “I saw him come with the momentum and I pulled up to block and did exactly what I needed to do to try to win the Daytona 500. I wasn’t going to just let him have it – I wasn’t going to stay on the bottom and let him rail the outside.

“So I blocked and he got to my bumper and pushed and I thought I was still going to be OK…and somehow I got hooked. I haven’t even seen the replay, so I don’t know what happened. I’m just devastated. I really thought we were going to start this relationship off with Stewart-Haas Racing in victory lane, and get [sponsor] Smithfield and Ford and everybody to victory lane.”

The situation called for Almirola to block as he reiterated he was trying to win the Daytona 500. Had it happened earlier in the race, Almirola would not have made the same move.

Despite the disappointment, Almirola projected a positive attitude and even smiled. Having run competitively in his first race with SHR, Almirola said he was “still very excited” and wasn’t going to get down.

“This is just one race. It might be the biggest race and this one’s going to hurt for a while, but I think next week we’ll have another shot.”