The time deficit in qualifying for the Rolex 24 At Daytona told the story of how far out of the Balance of Performance window BMW’s brand-new M8 GTE model was living.

The pair of BMW Team RLL entries, a distant eighth and ninth in a GT Le Mans class with only nine cars, were more than 1.1 seconds adrift from the pole-winning Corvette. Any questions of sandbagging were answered in the race when the Nos. 24 and 25 BMWs were between 1.0s and 1.2s slower than the best managed by the GTLM Fords and Ferrari. Hope for a decent debut was lost well before the race.

Just as the BoP for the Fords erred heavily in the positive direction, the BMWs sank like rocks over 24 hours as their BoP settings relegated the twin-turbo V8-powered machines to the bottom of the GTLM pile.

The surprising BoP variances in IMSA’s popular, manufacturer-rich GT class left BMW wholly unimpressed throughout the event. Its desire for corrective measures was expressed in a rather direct statement that was handed out to select members of the press in the final hours of the WeatherTech SportsCar Championship season opener:

“BMW and IMSA have been working together for years in a very positive and constructive manner. The BoP system is an integral part of global sports car racing including the IMSA WeatherTech SportsCar Championship. BMW and IMSA will continue productive and open talks and have agreed to find an appropriate BoP assessment for the upcoming events stating with Sebring, allowing the BMW M8 GTE to show its performance for the benefit of the series, BMW and all of our fans.”

Asked to explain how IMSA planned on working with BMW to improve its ability to compete with other GTLM models during this week’s test at Sebring, series competition VP Simon Hodgson provided RACER with the following statement:

“IMSA’s standard postrace analysis following the Rolex 24 At Daytona involves test curriculums for the Sebring test that can be applied to all manufacturers in a controlled environment. This follows the process that was introduced at Daytona in December. Following [this] week’s test at Sebring, IMSA will continue to have discussions with all manufacturers as we work towards establishing appropriate class BoPs for upcoming events starting with the Mobil 1 12 Hours of Sebring.” 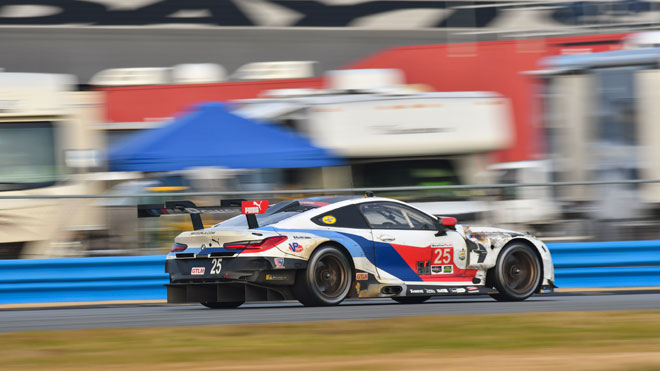 Looking at the BoP tables issued for the start of testing on Tuesday, the BMWs have lost boost at three points below 4500rpms, which suggests IMSA believes its initial acceleration was more than adequate.

At nine different boost intervals from 5000-7500rpms, the BMWs have received an increase, with the biggest jumps made from 6750-7500rpm, which would suggest top speed – and the related ability to stay close to other GTLM cars to attempt passes under braking – is where the Daytona deficit was found.

At the Rolex 24, BMW and Corvette were tied for the slowest GTLM models in a straight line. The best achieved in the class, a pass through the traps nearing Turn 1 at 183.830mph by the No. 62 Risi Competizione Ferrari 488 GTE, was followed by Ford, Porsche, and then the No.24 BMW and No.4 Corvette at the same 182.193mph. The sister No.25 BMW set the slowest traps speed among the nine GTLM entries at 180.983mph.

Fans of GTLM and the BMW Team RLL entries will have an interesting time following the testing action this week in Sebring as increased scrutiny is applied from the brand to ensure competitive balance is restored.