With the benefit of another night to work on their race setups, some IndyCar drivers left the Phoenix open test Saturday night with a more encouraging view of what could take place during the April 7 race.

Friday night’s three-hour session was remarkable for its lack of competitive passing – it was a rarity to see one driver chasing another down and executing a daring maneuver – but Saturday night’s running did offer a better look of how the race might produce some thrills.

The offseason move from using Chevy- and Honda-designed aero kits producing crushing downforce to new-for-2018 universal kits that shed a significant amount of downforce and drag has altered how the cars navigate the one-mile ISM Raceway oval. The 2016 and 2017 races generated long trains of cars glued to the track, and with the series searching for a cure to that boredom, the downforce scale was tipped far in the opposite direction for the test.

Last weekend’s outings showed exactly how far it has shifted as many drivers fought to control cars that oversteered, understeered, and slid beneath them on a regular basis. In concert with having to lift off the throttle in Turns 1 and 3 – a new experience for everyone – fans observed a talented field of drivers who were doing all they could to hold on while lapping near 190mph. 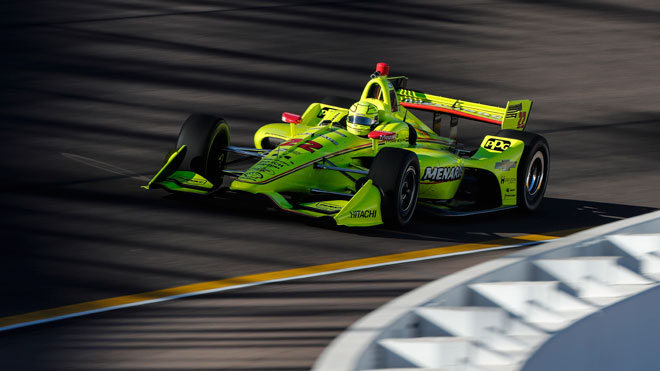 According to defending race winner Simon Pagenaud, 250 laps of peril at ISM Raceway could be where a new kind of entertainment is presented in Arizona.

“I was surprised how much it changed by Saturday night,” the Team Penske Chevy driver told RACER. “We found a really good setup on our car, and I really went for it. People were doing long runs so it was good to see the tire degradation. And because there are cars with degradation that’s so much worse than yours, it gives you an opportunity to play the game of passing. I was super pleased.

“At first, I was worried because I didn’t feel a draft, but as people had problems with tire deg, they lifted more – and if you have a good car, that’s when you can make a lot of passes. A lot better than I did in the race last year. But you don’t want to be the one whose car isn’t handling well, let me tell you.” 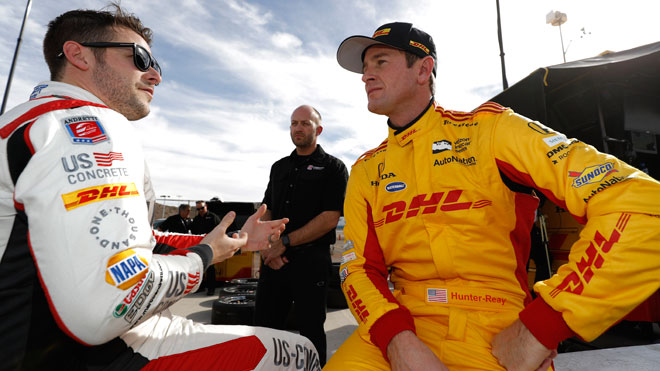 Andretti Autosport’s Ryan Hunter-Reay, winner of the 2014 Indy 500, also believes tire preservation will be the deciding factor in who moves forward and who plummets during each stint in the race.

“From my perspective, it’s very difficult out there,” Hunter-Reay said. “After 25 or 30 laps, you feel like you’re hanging on for dear life. On the one hand, that’s great; you feel like you’re fully in charge of the car instead of being flat [on the throttle] the whole time because of the [aero kit era] downforce. But then you realize a stint is going to be 60 to 70 laps, and if your tires are done barely halfway through every stint…

“It’s going to be a handful, that’s for sure. Even if you’re taking great care of your tires, I don’t think you’re going to get close to the end of a stint running the type of speeds you did at the beginning. That drop off is going to be pretty severe.” 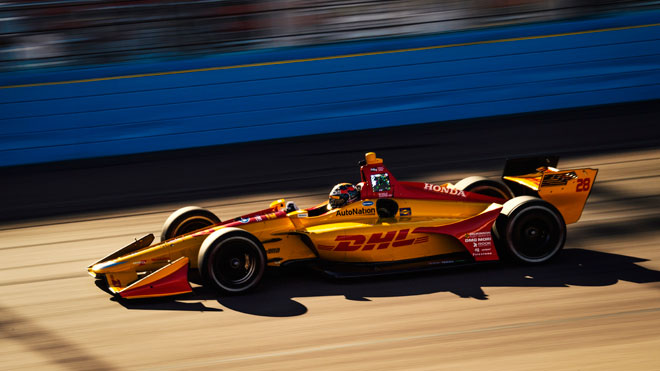 From all that was observed from inside his Andretti Honda, Hunter-Reay wonders if there’s a mismatch in the vital interaction between downforce and tire life. Considering the long lead time needed to make new tires, an increase in downforce for the race could be the fastest remedy if IndyCar is in agreement with his assessment.

“Behind the wheel, what it really feels like to me is the downforce level, in conjunction with the current Firestone tire compound, doesn’t match,” he added. “We’d gone down the road with a tire that had to be developed to deal with the massive aero loads, and now that we don’t have all that downforce, it feels more like a speedway tire – something that’s harder so it can deal with the higher speeds and scrub.

“But when the speed decreases and the aero load decreases to what we have at Phoenix, it feels like the tire is up on top of the track. I think there’s going to be passing, but it’s going to be like the test where an ill-handling car bottlenecks everyone up, and we’re going to be tripping over each other to get by. It’s like wearing your sneakers on ice. It’s a product of the development path we’ve gone down, which is no fault of Firestone.”

Opportunistic passing could be the constant when the green flag waves under the lights at Phoenix. Whether it’s a car pulling out of the pits and balking oncoming drivers, or a car’s handling falling off much sooner than expected and being pounced on from behind, Carlin Racing’s Charlie Kimball believes capitalizing on misfortune will account for most of the overtaking.

“It definitely got ragged Saturday night,” he said. “I think part of it was people were doing long runs at different times in the last 90 minutes and doing pit stops, so a lot of people were getting checked up, and some people were on older tires. Now, IndyCar’s done 100 percent the right thing by rewarding those who achieve better setups with lighter downforce and more efficient drag coefficients, and now we have the ability to pop off the corners and accelerate better than we have with the aero kits. So the potential is there. But it’s going to be [tire] degradation that makes the passing possible.” 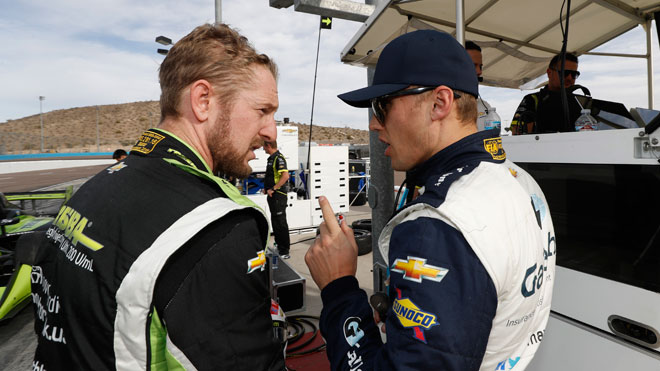 Kimball, like many IndyCar drivers, says being mindful of the single-lane dynamic at Phoenix will be a requirement if everyone wants to bring their cars home intact.

“I think it’s going to race better than it has the last two years, but at the same time, when has Phoenix ever raced like we see at Indy or Iowa with lots of passing?” he asked. “Even in the good old days in the ’80s and ’90s at Phoenix, you go and watch those races on YouTube and there isn’t a lot of passing. It’s a single-groove racetrack.

“I had a few experiences with guys diving down the inside or trying to go around people on the outside, and the outer groove was miserable. Someone came out of pit lane into Turn 3, a guy thought he’d go around the outside, and I thought he was going to pancake hard before he saved it. Because of the lack of downforce, the lane’s a little narrower – the single groove is heightened. It isn’t a place where you can go two or three wide, so it’s unrealistic to think it’s going to race like a superspeedway.

“We’re doing 189mph, running low 19-second laps, which is a half-second off the track record. That’s remarkable. But we also need to realize Phoenix isn’t a track like Pocono where going five wide into Turn 1 is possible. It’s going to be a case where if you’re taking care of each other and not doing anything stupid at the last second, disaster can be avoided.”

Slipping and sliding. Big steering inputs to keep cars off the walls. Come April 7, IndyCar fans might see an entirely different race than was initially predicted.

“There’s going to be a lot of differences between cars and drivers at Phoenix, and we’re going to see skills again,” Pagenaud said. “The car isn’t doing so much of the work now, which I like. It’s up to you to make your speed and deal with whatever problems come your way. There’s no mask on the problems when the downforce is taken away. I think it’s going to be a lot better race.

“I’m not saying it’s going to be running next to each other for 20 laps like we do at Iowa, but as we lose grip during the stint, it’s going to come down to who has the right setup and who can manage the problem from inside the cockpit better than the rest. It’s not going to be easy, but we should have more opportunities to pass, which we’ve never had before.”