The first day of IndyCar open testing with the 2018 aero package at Phoenix left a number of drivers concerned about their ability to pass other cars and cope with traffic. However, Andretti Autosport’s Ryan Hunter-Reay noted that there were more elements to factor into the performance equation – if not a lot of time, given the limitations on testing, to come to terms with them all.

“I don’t know. I’m not sure,” admitted Hunter-Reay (pictured below during Friday’s night session) when asked about what the new package meant for April’s race at Phoenix. “It could be for the race weekend that if it goes in a direction where you have tire degradation, the car is sliding around a lot, everybody is struggling, yes, you can get passing going because the cars that have that little bit of advantage – better balance, some guy’s got a rhythm going – you’re going to have more opportunity to pass.” 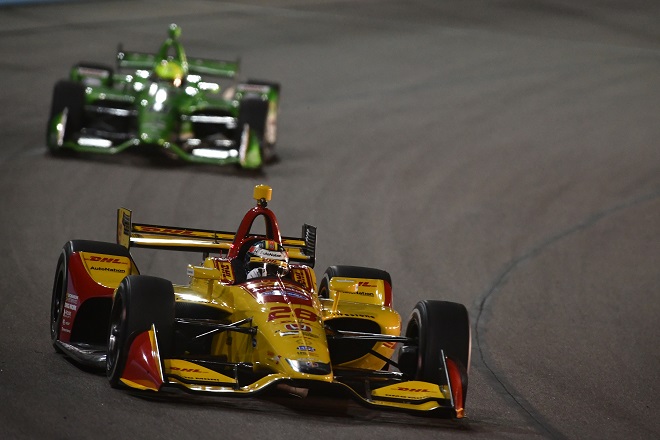 Teammate Alexander Rossi agreed there is plenty more to figure out about the new package, although he likes what he’s found so far.

“I think it’s easier to feel the car,” he said. “It’s still a big challenge. There’s a lot of really good teams here. It’s a big challenge to get the car in the right window, to find the balance for each individual driver under different circumstances – qualifying, race, temperatures, tire wear, etc. I don’t think that part is any easier.

“It definitely is more of a natural driving style, I feel like, than the [previous] car. From that standpoint it’s a positive. In terms of the engineering aspect, I’d say it’s the exact same. It’s a big challenge to get it right, as all motorsports is. That’s how it should be. Hopefully the best teams and drivers come to the top.”

Whatever its effect on the racing, teammate Marco Andretti (pictured, top) feels more at ease with the lower-downforce 2018 car than its predecessor.

“I prefer it. I like a lighter car,” he said. “For me, I really struggled with the aero kit car. I felt it was very light, switchy grip. You’re either slammed with downforce or it snaps like that. With this thing, it’s on the edge the entire time. There’s some predictability you get from it – you feel it more, but you’re very on edge.

“We’re definitely thrown into it a bit late. But, you know, it’s still a racecar. I like how the feel comes more into the driver, I think. For me, I find it easier to drive it to the limit because it’s a more established grip limit, rather than ‘hoping it sticks’ type thing, which is what my problem was last year.”

Hunter-Reay noted that finding those limits in the allotted test time before the season begins will be tough, though.

“To put it into perspective, we’re on track three days on a road course before we get to St. Pete. That’s a very short amount of time,” he said. “It’s obviously not ideal, but we’re just going to lace up our boots and get on with it. That’s all you can do.”

Road to Indy 10m ago