This year, 20 drivers that took part in the Rolex 24 At Daytona flew straight to Australia to race in the Bathurst 12 Hour the following weekend. One of them was factory Porsche driver Patrick Long.

Long’s January schedule consisted of the Roar Before The 24 test at Daytona, followed by the Rolex 24 itself, then a trip across the Pacific for the 12 Hours, where he and his teammates at Competition Motorsport finished second in class.

While the Rolex 24 has become an iconic American race during its 56-year history, the Bathurst 12 Hour is still very much in its infancy. An early version of the race in the 1990s moved to Sydney in 1995 but fell dormant a year later, and then was resurrected in 2007. It’s been an annual fixture ever since.

Since then, year on year, more international drivers, teams and manufacturers have made the pilgrimage to Mount Panorama to tackle the fast, flowing, layout, which features steep climbs (and drops), narrow sections, and unforgiving concrete walls. It’s become a bucket list race for many drivers and teams, especially with so much local Supercars talent taking on the race too.

But before you can even begin thinking about taking a car out on the circuit, you have to get there first. And for the drivers with the same itinerary as Long, after a 24-hour race, Australia can feel light years away.

“The turnaround is the trick, because the loss of time coming west mans that there’s no time to rest after Rolex – it’s a direct turnaround,” said Long of the 9500-mile Florida-to-New South Wales journey.

“By the time you get to Bathurst, you have two days to get your head around the time zone, then you’re on track. It’s a pretty compressed schedule for the 12 Hour, so it goes by quick.

“I take a different approach. I get out of Daytona on Sunday, and spend an evening at home in LA as a stopover. Then I get to Australia a day early, chill in Sydney, and head up to the circuit on Thursday. That way it’s not as intense. If you push too hard, that’s when it becomes tough to even take to the track”

The trip from paddock to paddock takes around 21 hours of flying, and three hours of driving. But according to Long, the unique challenge of the Bathurst layout justifies the effort. 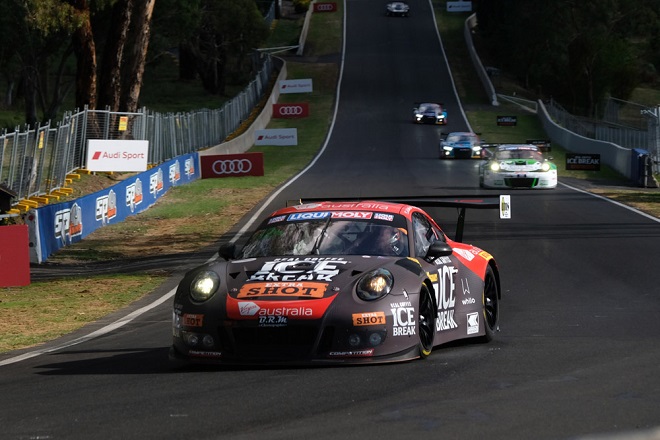 “It’s one of those circuits that keeps you engaged,” he says. “You can never have enough laps around the place. It requires a unique driving style. The traverse across the mountain is unique – as you head down the hill towards The Dipper, you’re really just modulating brake pressure, versus late braking and early acceleration.”

The race is half as long as Daytona, but is very physical nonetheless. This year’s Rolex 24 delivered a record amount of green flag running, while Bathurst almost broke the record for the lowest distance covered by the winner following heavy attrition during the first half. Long attributes some of that to the race starting in early-morning darkness despite there being no night practice.

“It’s borderline insane to send out a full grid with zero laps in the dark on this circuit on race day,” said Long. “But the middle part of the race has had a huge amount of American flavor, because of the amount of safety cars. It keeps it tight and interesting.

“But the one common theme about the Bathurst 12 Hour is that there’s always an edge-of-your-seat moment at the end, or one key battle. That’s why we tune in.”

While the long spells of flat-out running at the Rolex provided an unusual counterpoint, Long says that it wasn’t necessarily an unexpected one.

“This year, with the record distance and almost no yellows, it was an odd Rolex, but it didn’t surprise me, if you look at the level of the teams and drivers,” he says.

“And also, globalizing the rules package of prototypes and GT3 means you have a higher quality of car. There needs to be credit paid to IMSA because something is working – the race was clean. I don’t think it was bad to have a more traditional feel to it.”

The same can be said for Bathurst. Although this year was marked by a high level of attrition, Long feels that the 12 Hour has, in its short history, improved exponentially in quality up and down the entry list too.

“Like in IMSA recently, each year at Bathurst the level of car has improved here, the level of closing rates has decreased,” he says.

“The trick is that if a slower car has a driver that’s experienced at Bathurst then there’s a level of respect, but on the other side if there’s an inexperienced driver set, then it can get pretty tight at the top.

“I’m adjusted to the atmosphere here after doing this race four times, it’s become pretty manageable. The first couple of years, there were Fiat 500s out there – clubsport showroom stock cars. That rubbed me the wrong way, because I didn’t think the race needed it with GT3 and GT4 gaining so much traction. It’s a must-watch race now, and it’ll take steps in the right direction in the coming years, too.

“Even with better driving standards, though, you still have to take a different mindset. Normally, you put your helmet on, and you have this mentality to get past everyone, and make every lap as quick as possible. But with Bathurst, you’re forced to govern your instinct, and process the risk level all the time.

“You need extra patience; you need to respect this place. That’s why it’s special.”