The Bathurst 12 Hour  ended in controversy, with the race stopped early due to a large accident with 25 minutes to go.

Belgian Audi squad WRT took the win in its first trip to Australia, with Robin Frijns, Stuart Leonard and Dries Vanthoor taking the victory in their R8 LMS GT3.

With the top four cars, at least, struggling to make it to the finish with the fuel they had, Ash Walsh tangled with a Class MARC car running across the Mountain section, and ended up sitting stationery, and sideways, across the circuit.

After a few seconds John Martin arrived at 130mph in his Mercedes-AMG and hammered into the car. Neither driver was hurt, and the field picked through the debris before being stopped on the grid by officials.

With time running out, officials had no choice but to declare the event – thereby sidestepping what could have been a dramatic conclusion. 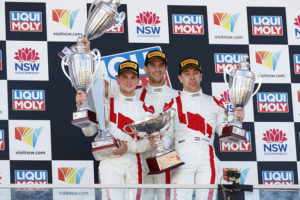 “It was a strange atmosphere from the box, but it’s a win,” said Vanthoor.

“Last year we didn’t have luck on our side,” noted Frijns. “We came back strong this year. We didn’t have the radio for the first few hours. The last stint was fuel saving, so trying to keep the gap was tough.

“It was pretty tough. There was a lot of traffic to keep the car in one piece is one thing, but to drive in the front is another thing. One mistake and your race is done. You have to be awake the whole time.”

Second was Supercars star Jamie Whincup, who was also conserving fuel in the SunEnergy Mercedes he shared with Kenny Habul, Raffaele Marciello and Tristan Vautier.

Close behind were four Porsches; the Black Swan car of Tim Pappas/Jeroen Bleekemolen/Luca Stolz/Marc Lieb, Matt Campbell/Patrick Long/Alex Davison/David Calvert-Jones and Earl Bamber/Laurens Vanthoor/Kevin Estre. Prior to the race-ending crash, none of the cars mentioned so far were certain to complete the race, and all the drivers were saving fuel.

The man who was not was Romain Dumas, who was charging in the Manthey Racing entry. The Frenchman and co-drivers Frank Makowiecki and Dirk Werner were classified sixth.

As much as Audi triumphed, and Porsche threatened, this was a race that looked to be at the mercy of BMW. Two M6 GTRs led the race, Chaz Mostert dominating early in the Schnitzer he shared with Marco Wittman and Augusto Farfus. But when pole winner Mostert climbed back into the car to finish the race, he was caught diving into a diminishing gap, putting the car out of the race.

The incident also accounted for the sole-surviving Bentley, with Steven Kane well-placed at the time to give the Continental GTR3 a podium result in its final race. Mostert was fined A$2000 ($1500) for his role in the incident, with A$1000 of that suspended.

The other BMW started 49th and last but Timo Glock caught the back of the GT3 field in the opening hour, and he and co-drivers Steven Richards and Phillip Eng actually led the race. The car dropped back to ninth at the finish of the race after Eng lost a lap when he went off after a brake pad change.

The McLarens threatened, but were struck by mechanical problems. Both YNA Autosport cars had issues, one with overheating and one with electrics, while Warren Luff was looking strong late in the race in his Objective Racing entry when a started motor failed and stranded the car in the pits.

Brenton Grove/Steven Grove/Daniel Gaunt/Ben Barker gave Porsche a win in Class B; Australian veteran Tony Longhurst announced his retirement after winning Class C with third-generation drivers Aaron Seton and Matt Brabham in their BMW M4; and in the Invitational Class I, Keith Kassulke/Rod Salmon/Will Brown gave the MARC Cars MARC II a win on its debut. 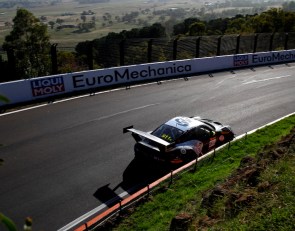