The announcements regarding new and returning Pirelli World Challenge GTS campaigns have been coming quickly as the season opener at St. Petersburg nears, and it looks like the category is set to explode in 2018.

Not only has Blackdog Speed Shop stated its intent to defend Lawson Aschenbach’s title with its Camaro GT4.Rs, but Flying Lizard announced its return with the all-new Audi R8 GT4 car – which will also be campaigned by M1 GT for Jason Bell – and Samantha Tan Racing says it will compete in SprintX with BMW’s new M4 GT4. One of the other eagerly awaited new GT4 cars is the Mercedes-AMG GT4, and Robinson Racing was the first to claim it as its weapon of choice to fight for the championship with Gar Robinson and Shane Lewis.

While those teams previously mentioned have a history of competing in one World Challenge category or another, Robinson Racing comes from the Trans Am Series, having won two of the last three TA2 championships. Looking for the next step, Robinson felt that PWC offered more competitive racing at a better return on investment than the top category of Trans-Am. 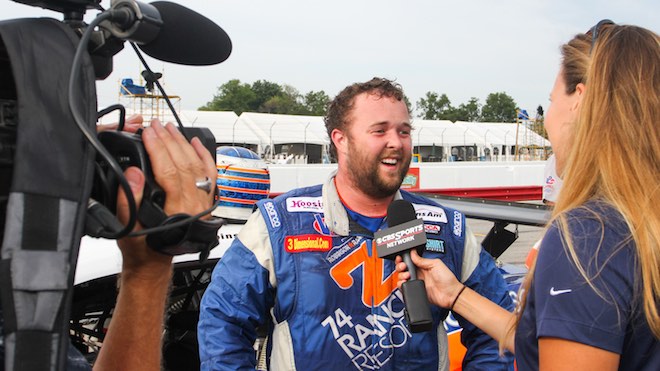 “I’m not putting the talent down, but it seems the racing wasn’t as hard in TA1 as in TA2,” Robinson (pictured above, Chris Clark photo) explained. “I want to better myself as a driver, and the logical step in that was to go where the racing is harder, not easier. Just because the car is more extreme and more of a wild animal doesn’t mean it’s a bigger, better step for us. Plus, to run a Trans Am car is so much more expensive; every couple of races you’re going through motors and every race you’re going through diffs and hubs. I think World Challenge is a better fit for us in that department, too.”

Robinson Racing will run cars in Sprint and SprintX competition for Robinson and Lewis under the 74 Ranch Resort banner. Robinson Racing, founded by Gar’s father, George Robinson, has raced in Trans Am and Grand-Am/IMSA competition for 27 years. This will be one of its first efforts in production-based racing, however, although Gar has some experience racing a GTD Viper at the Rolex 24 at Daytona.

“I think I’m going to have to change my driving style up a little bit. I know the car is heavier than I’m used to, and has less power than I’m used to…but it has a lot more gadgets and stuff that I’m not used to dealing with as well,” he noted. “I had a little bit of a taste of it with the Viper in 2016 at the Rolex 24, but I think it’s going to be a little bit of a challenge for me. I’m going in with a humble spirit and try to learn as much as I can and try to be the best I can. There’s no practice session you can’t learn something in.”

His teammate Lewis, though, has a lot of experience in production-based GT cars, and has a couple of Pirelli World Challenge victories under his belt. He’s been running the TA2 Camaros with Robinson for the past few years.

“Shane has been a great partner with us,” Robinson said. “As a young driver, I think it’s really important and I enjoy being able to learn from a guy like Shane with such an amazing resume – I think he says he has something like 48 24-hour races under his belt and a couple of Nurburgring wins. I try to learn as much as I can from him, and If I can have a career that’s even half as good as Shane’s, I’ll consider that a win.”

Robinson Racing is the only team that so far has announced it will campaign the new Mercedes-AMG GT4, although CRP Racing, Black Swan and Champ1 raced the GT3 version in 2017. It’s a leap of faith to compete in an all-new car, but the homologation process along with the success fo the GT3 car makes it a much less daunting prospect.

“If you look at Mercedes for the past however many years, they have how many F1 championships? Whenever they get into motorsports anywhere, they don’t fall short of dominating,” said Robinson of the team’s car selection. “Ben Keating with Riley Technologies has had very good success [in IMSA]. That’s a GT3 car, but it seems like it’s a really well supported manufacturer to go with. From what I’ve heard, everyone that has one already sounds really happy with them.”

Robinson is currently in Australia preparing to run a TA2 car in a support race for the Liqui Moly Bathurst 12 Hour, which is part of the Intercontinental GT Challenge like the California 8 Hour. He expects to come home to some new GT4 cars in the shop, ready to get prepared for the PWC season opener on the streets of St. Petersburg on March 9-11.