Stroll rules out options outside F1 in 2018

Stroll rules out options outside F1 in 2018

Lance Stroll insists he will not take part in any other racing outside of Formula 1 in 2018 following his appearance at the Rolex 24.

The 19-year-old (pictured third from left, above) took part in his second attempt at the Daytona enduro last weekend, finishing 15th overall and 11th in class after his No.37 Jackie Chan DCR JOTA ORECA LMP2 suffered a number of right-rear tire failures. Having already explained what he finds so attractive about competing in the Rolex 24, Stroll says his full focus will be on his second season with Williams for the rest of this year.

“To be honest, at the moment I’m not ready to do Le Mans or do anything other than Formula 1,” Stroll told RACER. “My focus is Formula 1 – I do want to become a world champion one day and I want to have a good year this year. Last year there were a lot of things that we could have improved on and that’s what I want to do. I want to improve my weaknesses.

“I believe we did have a good year last year in terms of how many points we scored and where we were in the championship – we were fighting for 10th until the last race with [Nico] Hulkenberg and Felipe [Massa] – and I’ve had some great results. But there are still areas like qualifying and understanding the tires and all that; all those factors in Formula 1 I have to work on and that’s where my main focus is.

“This was a one and only thing at Daytona; after this it will be Formula 1 all the way until Abu Dhabi. And then, next Daytona!” 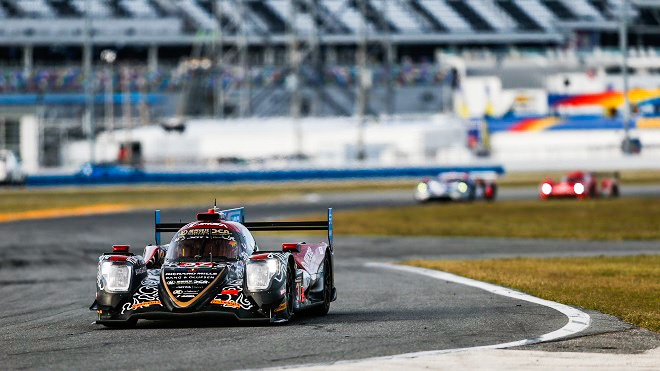 Comparing the difference between racing an LMP2 car at Daytona and F1, Stroll says there is more freedom to push during the endurance race than in a grand prix.

“It’s the tire, mainly. In Formula 1 we’re managing tires, fuel…. Here we’re managing a bit of fuel as well, but mainly tires. Formula 1 tires don’t allow us to push the whole race and here we’re constantly pushing. Even though there’s traffic we’re always hustling the car and trying to get to the end of the stint as quickly as possible. In Formula 1 that’s not the case – we’re managing all the way to the end, looking after tires, the car, all those kind of things, and this is just a very different kind of racing.

“But Formula 1 is Formula 1, and that feeling of standing on a grand prix podium is probably just a little bit worse than winning a watch… I’m just kidding! They’re both great in their own ways, two completely different kinds of racing. So it’s good to get a taste of what it’s like to be in Formula 1 and what it’s like to be here at the Rolex 24.”