Norris: United struggling ahead of Rolex 24

Norris: United struggling ahead of Rolex 24

Lando Norris admits United Autosports is “struggling a lot” with its LMP2 Ligier at Daytona ahead of tomorrow’s Rolex 24.

The McLaren protege is sharing the No.23 car with Fernando Alonso and Phil Hanson, with the trio set to start from 13th after the Spaniard completed qualifying on Thursday. Following the final practice session on Friday morning, Norris says the team is still struggling to get a consistent car, and may need the forecast wet weather on Sunday to help its competitiveness.

“At this rate, we’re going to need something – basically, anything,” Norris told RACER. “At the moment we’re struggling a lot. We’re not really improving too much. Every time we think we’re taking a step forward, we’ve gone out in the next session and it’s just been terrible again.

“So nothing seems to be really working. Straight-line speed we’re down on everyone else, and I don’t think it’s because of the engine, but the aerokit seems quite inefficient. We’re struggling a lot with the car in the first sector with traction and over the bumps.

“It just seems like the worst track for us, and the team basically, with the car that we have. The car’s really strong at other tracks, so it’s not like the car is terrible, but for some reason this track and combination seems to be the worst possible for the car.

“I don’t know about the wet, I’ve never driven this car in the wet. So I don’t know about the rain because I’ve never driven with these tires, which seem to be probably the biggest limiting factor for us. So rain could help, it probably couldn’t get a lot worse… So I’ll be praying for it, it could be quite fun. But at the same time, I’ll still enjoy doing the whole race.”

Norris believes that the biggest challenge will be maintaining concentration in a difficult car in order to still be in contention late in the race.

“It’s going to be very difficult,” he said. “Mentally it will be draining, because some of the other cars will be able to just drive around relaxed, when even when we’re not pushing, we’re sliding out of the corners. For 24 hours of constantly being on top of the car and having to concentrate 100 percent throughout the whole race is going to be tougher than [in] some of the other cars. 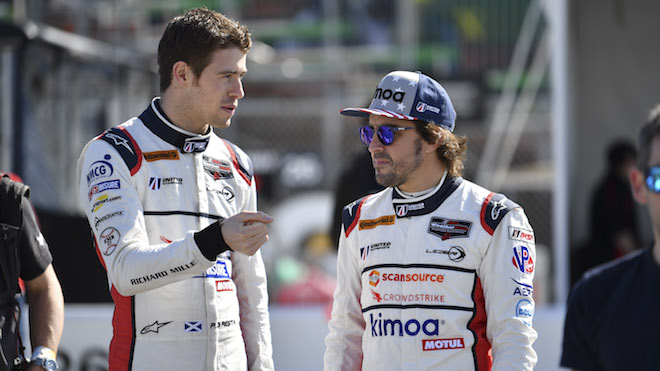 “It will be a challenge, but it’s still fun. I still enjoy driving every lap. It’s all something different, so I’ll try and make the most of it. I think it will be a big achievement if we can just make the 24 hours. I don’t think we’ll do badly.

“If we can just stay in the race until the final two hours and try and make the car a bit better today and during the race, maybe we can do a bit better by the end of the race. But it’s going to be tough.”

Paul di Resta [above, with Alonso], who is sharing the sister No.32 car with Bruno Senna, Will Owen and Hugo de Sadeleer, says there are common problems that both United Autosports entries have been facing.

“With three guys in the [No.23] car they’ve had a bit more running so they’re definitely a bit more in tune with how it’s all running, but the guys have shared everything,” di Resta said. “There’s no secret that we are struggling on the side of performance, so even more so we’re all having a chat. There have definitely been some comparisons that have gone across that you wouldn’t want to share!

“But the team needs to be sharp. It’s not over. Tactically you can do a very good job, you can look elsewhere [for performance]. We’re quite a nice, tight group of people all here. You need to be ready to react to racing here because it is different, and ultimately the way the yellow flags work, you can stay on the lead lap.

“The final fight is in the last two hours, which equally could be wet as well. So going into the race, you’ve just got to be very open-minded and get the car to that point, hopefully. There is no question that somebody could make a mistake, and that is the risk of what 24-hour racing is all about, isn’t it? So collectively we’ll go in there with the best intentions.”