Simpson: ‘Winning Daytona once is not enough’

Simpson: ‘Winning Daytona once is not enough’

Winning the Rolex 24 At Daytona is a bucket list achievement for any race car driver. But for Stephen Simpson, winning it once is not enough.

“I think the Rolex 24 is one of those events where once you’ve won it once, you want to win it again – even more so than before you won it the first time,” said Simpson, Prototype Challenge class winner of the 2016 Rolex 24 [below; Simpson third from left].

“Winning this race is a huge deal. Obviously, it’s going to be very tough this year with all of the competition we’ve got, but at the same time our team thrives on that. We love the competition.”

Simpson and JDC-Miller Motorsports made the move from the now-defunct PC division to Prototype last year, finishing fifth in the class in the Rolex 24. He returns with Chris Miller and Misha Goikhberg in the No. 99 ORECA 07-Gibson, joined by Gustavo Menezes. The team will also field the No. 85 LMP2 entry for Simon Trummer, Robert Alon, Devlin DeFrancesco and Austin Cindric.

“We’re up against big manufacturers, strong teams and great driver lineups,” Simson said. “We’re planning on putting our heads down and doing our thing. Hopefully, that will end up in a very good position on Sunday afternoon.

“This year, more so than ever, I think the top four or five finishers are going to have completely error-free races,” Simpson added. Everyone’s got to have trouble-free races without making any silly mistakes.” 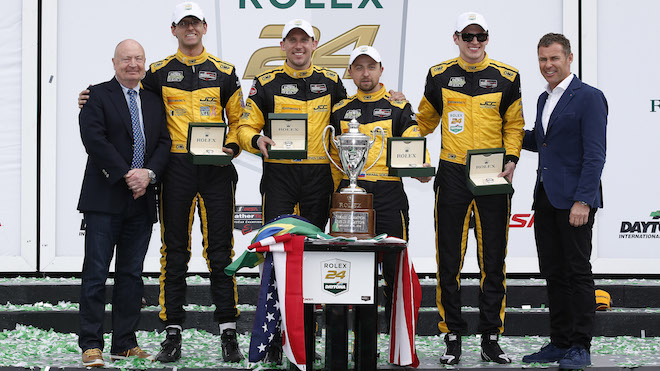 “When I heard of the passing of Dan Gurney, that definitely went through my mind,” Simpson said. “Unfortunately, I never had the opportunity to meet him. When I think of the Gainsco ‘Red Dragon’ I think of Alex Gurney and Jon Fogarty. They were the main drivers for the No. 99 for as long as I can remember. I’ve thought about that a lot over the past month. It’s my goal to try to achieve what they were able to in the No. 99 car.”

For the first time in recent memory, Simpson is doing only one event on an IMSA weekend. Michael Johnson, his normal co-driver in the Continental Tire SportsCar Challenge, is back home recovering from a broken leg suffered in an incident during the Roar Before the Rolex 24 in early January.

“I was supposed to also be racing JDC-Miller’s Audi TCR,” Simpson said. “Fortunately, Michael is recovering pretty quickly and is in high spirits. We’ll be back on track soon. But I can’t remember the last time I’ve been at a track with only one car to drive.”

The South African has been keeping busy since his last Daytona visit for the Roar.
“The time has flown by,” he said. “I’ve spent a lot of time in the gym, trying to make sure that I’m as fit as ever, because this is a very tough race. Last year wasn’t as physically demanding, but it was very mentally exhausting because of all the rain. This year, it could go either way, so I want to be sure I’m as ready as possible.”