Miami is being lined up to host a Formula 1 demonstration event in 2018, similar to F1 Live in London last year.

All 10 teams came together in central London to put on a free demonstration for fans around the streets of the British capital in the week leading up to last season’s British Grand Prix. Nineteen of the 20 drivers – with Lewis Hamilton the only absentee – demonstrated a number of recent and classic cars around Trafalgar Square, while there was also a big fan zone including shops, bars and live music performances.

F1’s managing director of commercial operations, Sean Bratches, says Miami is one of five venues set to host a smaller event this year in order to reach more fans.

“We plan something similar in Marseille, Berlin, Milan, Shanghai and Miami, but not with so many cars,” Bratches told Auto Motor und Sport. “We believe that this contact of Formula 1 with the audience outside the racetrack is important. It also carries our message to people we would not otherwise reach.

“Formula 1 has been so exclusive over the years, that it was only accessible to interested people. The same applies to sponsors. There is a lot of interest from companies for these events that are not yet in F1.” 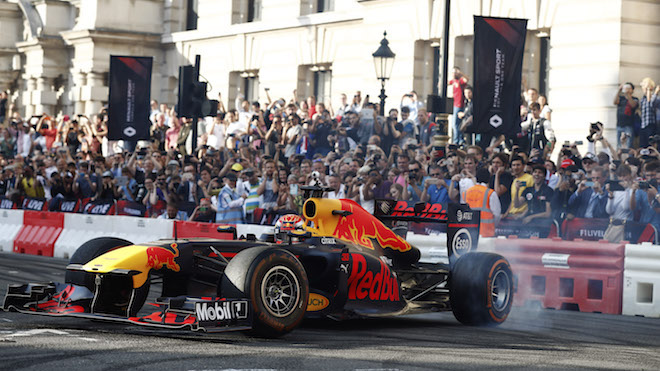 All five locations are cities in countries that will host races this year, with Marseille close to the Paul Ricard circuit that will host the returning French Grand Prix. Shanghai and Milan already host races at nearby tracks, while the German Grand Prix returns to the calendar at Hockenheim after a year off last year.

As with London, the cities selected suggest an event will be held in the immediate build-up to the race in the same country, with the United States Grand Prix taking place on October 21.

Bratches’ statement that fewer cars would be used points to Liberty Media spreading out the load across the teams during a 21-race season that equals the longest in F1 history.