Carlin reached another milestone in its IndyCar preparations when it completed its first test day at Homestead on Monday.

The shakedown marked the beginning of a four-day testing schedule, which will continue at Homestead tomorrow before moving on to Sebring for an additional two days of running.

“It’s a very exciting day for us as a team,” said racing director Trevor Carlin. “It’s our first ever run with an IndyCar at a shakedown test. It’s gone extremely well – we’ve had no technical issues whatsoever. The car ran flawlessly. We’re very happy, and now tomorrow we can start pushing on with our test program.”

Both Max Chilton and Charlie Kimball had track time, with Chilton, who will drive the No.59 entry, first to get behind the wheel.

“It’s been a boring winter, but it’s really exciting to be back on track,” he said. “I was on track for a few hours today and we had no issues with the car, which is amazing considering Carlin has never run an IndyCar. It was a great day, so now it’s just catching up on the many miles that other teams have done more than us.”

Kimball, who will race the No.23, said that the shakedown marked an encouraging start point before work begins in earnest tomorrow.

“Team Chevy brought a perfect engine to run, and we were able to go out and do a bunch of laps to get a feel for the car,” he said. “The hard work will really start tomorrow, but we have a good car and a great baseline to go off of.”

Carlin is one of four new teams on the grid this year, joining Harding, which got its feet wet with a three-race program last season, Juncos, which is piecing together a one-car program using a rotating roster of drivers, and Michael Shank Racing, which has confirmed a partial schedule for Jack Harvey. 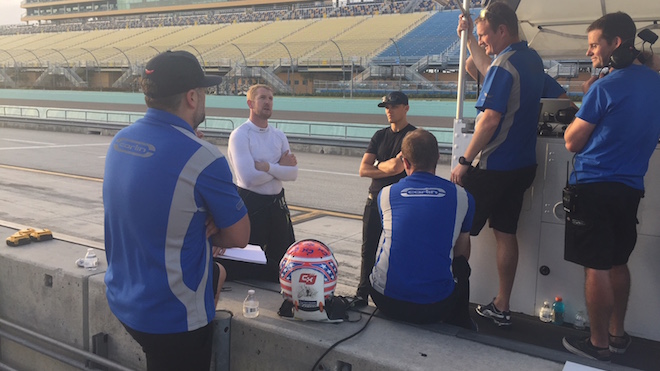