Winning the Rolex 24 at Daytona on the Cadillac DPi-V.R’s race debut, and following that with six more victories in the 2017 IMSA WeatherTech SportsCar Championship didn’t happen by chance. Cadillac’s philosophy of committing early and committing thoroughly to an all-new racecar built to an all-new set of technical regulations was key.

“Being prepared, and having the best product, is all down to the people,” says Cadillac Racing’s Director of Motorsports Competition, Mark Kent. “Not only the people within Cadillac, but in our race teams and technical partners, too.”

“By the time we got to Daytona, everyone was familiar with the DPi-V.R,” adds Wayne Taylor, team owner of Wayne Taylor Racing. “We’d done many miles of testing and even a 24-hour race simulation at that point, so our engineers and drivers really had a handle on the car before the season got off to a proper start.”

But preparation can only take you so far if a car doesn’t have the raw speed and performance to race at the sharp end of IMSA’s ultra-competitive Prototype class. First impressions of the DPi-V.R for 2017 Drivers’ champ Jordan Taylor told him he had nothing to worry about on that front.

“The first time you take a racecar out on track, you know if it’s got what it takes,” he says. “The Cadillac, from the very first lap I drove it, was incredible. The power and drivability, the downforce, the braking, and how nimble it felt – just wow.”

For all the most successful racecars, the sum is greater than the parts, and that’s certainly the case with the DPi-V.R.

“You can’t just put a pile of parts together and expect to win,” says Kent. “You need to put in the work to be successful. You have to balance the chassis, engine and aero, and then make the right compromises in each of those areas to ensure the overall package is optimized.”

Central to the DPi-V.R package is its naturally-aspirated V8 engine. Given Cadillac’s illustrious history with such a configuration – going all the way back to 1914 – it was the obvious choice. But sentiment doesn’t win championships, and the V8 landed its role on merit.

“We looked at all the engine options from the Cadillac portfolio, and we felt a V8 would give us optimal performance across the range of tracks we’d race on,” says Kent. “One of the key things that made it so successful was its reliability. To win races, you have to finish races…” 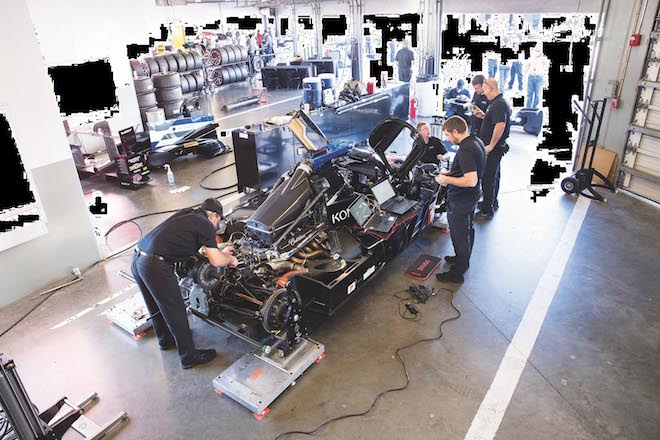 In 2017, Cadillac was the only Prototype class manufacturer to split its cars between multiple teams: Wayne Taylor Racing with the No. 10 DPi-V.R, and Action Express Racing with its No. 5 and No. 31 entries. For 2018, two teams become three, with the addition of a fourth Cadillac for Spirit of Daytona Racing.

As Mark Kent notes, Cadillac sought out partner teams who could not just hold up their end of the bargain – as in, win races and, ultimately, championships – but would elevate the project as a whole.

“It’s what we call a ‘key-partner approach,'” says Kent. “The goal is to have our teams work and learn together. For our part, we bring the right resources, such as ECR on the engines and Dallara on the chassis, as well as our own experience, and we share knowledge across all the teams. That spirit of cooperation and sharing and working together raises the bar for everybody.”

Ultimate validation of such an approach came on the race track, with all three Cadillac DPi-V.Rs winning at least once in 2017.

“Cadillac’s way of doing things means everyone can play to their strengths,” says Action Express team manager Gary Nelson. “Thanks to all the testing miles and work Cadillac put in on the DPi-V.R before the season began, we started with a strong base. It was then our task to optimize the cars for the races, which is where our expertise lies.”

Get the latest news on Cadillac’s 2018 race programs HERE.