Christopher Bell was one of the hottest race drivers in 2017, and the 23-year-old Oklahoma native has come out smokin’ in 2018.

“It was a big deal last year for an Oklahoma guy to finally win this thing again but going back-to-back is even cooler,” said Bell, a Norman resident who also captured the winged midget A Main here last weekend.

“But I hate it for Kyle because I wanted to race this out with him.”

Larson started on the pole in another Kunz Spike/Toyota and led the first 10 laps before Bell slipped past coming out of Turn 4. It stayed that way until they hit lapped traffic and Larson was able to retake the top spot on Lap 27. 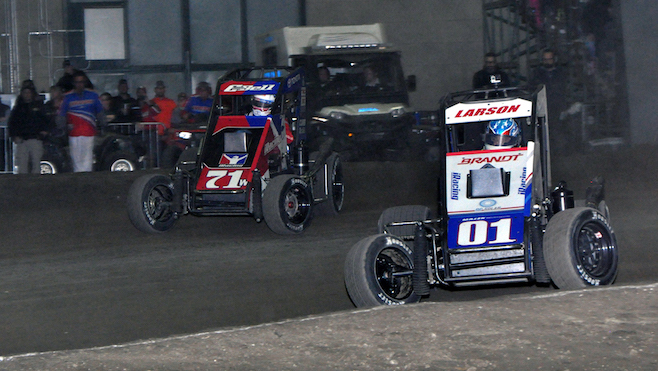 From there it was a two-man show as Bell stalked Larson around the top of track before the latter’s engine exploded in a cloud of smoke on Lap 43.

“I could tell he was struggling and slowing right before it happened,” said Bell.

With Larson gone, Bell checked out and the popular Abreu had nothing for him. 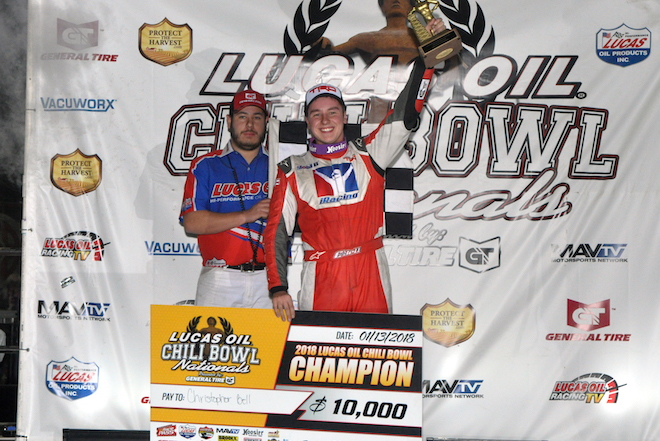 “Those two just got away from me in traffic but it was a good night,” Abreu said. “I’ll take second place in the Chili Bowl.”

Spencer Bayston gave Kunz’s team a podium sweep by finishing third, but the drives of the night came from Tanner Thorson and Ryan Bernal.

Former USAC midget champ Thorson and sprint-car standout Bernal had to transfer through the B Main. Thorson started 17th and charged to fourth while Bernal stormed from 23rd to fifth.