As a rule, 6-foot-3-inch men don’t make real good flat-track motorcycle racers, and we can all be thankful that Dave Despain found another calling.

For the past four decades, Despain has been in front of the camera for some of the best and most-watched motorsports shows on television, from Motor Week, to Thursday Night Thunder, to Speed Week, to WIND TUNNEL, to his own show on MavTV.

That booming voice, inquisitive mind, dry wit and authoritative presence became Dave’s calling card as he made one-on-one interviews an art form and never backed away from tackling a controversy, or tweaking a sanctioning body, or having a little fun at a caller’s expense.

“Dave was as good as anybody who’s ever done it,” praised Terry Lingner, the producer of NBCSN’s IndyCar coverage who worked with Despain at ESPN on Thursday Night Thunder, Speed Week and the Fast Masters series. “He was a terrific writer, and it was like having a co-producer when we worked together. And he was so comfortable looking into that lens.”

Growing up in Fairfield, Ia., Despain fell for motorcycles and was a novice in the American Motorcycle Association by the late ’60s. He was also a realist and decided working for the AMA in the public relations department made more sense than trying to keep up with Gene Romero. And it was because of motorcycles that he got into television.

“It was 1975 and we were at Daytona for the AMA races when ABC’s Wide World of Sports showed up to cover the Daytona 200,” recalls Despain. “They didn’t have an analyst, so my boss at AMA told them they should hire me because I had a lot of electronic media experience. Of course, my experience consisted of playing records on a 250-watt radio station in Iowa in the afternoon while I was in high school.

“But CBS gave me a camera and sent me into the pits, and told me to give them 45 seconds and explain why anyone would want to watch the Daytona 200. I raved that they were going faster than Richard Petty and only had their leathers protecting them, so they hired me to do the race with Keith Jackson.

“Then I ran into Ken Squire, who had seen my stuff on ABC, and he asked if I’d like to be the analyst for six motorcycles races on CBS. And that led to Motor Week Illustrated.” 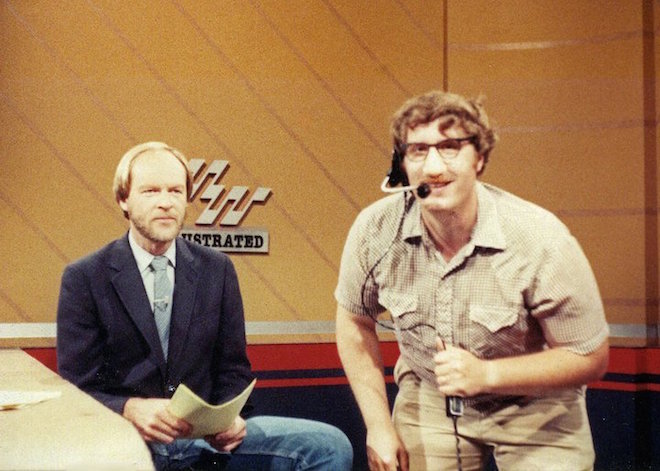 A fixture on TBS and then ESPN in various capacities in the ’80s and ’90s, Despain finally found the perfect match in 2003 when SPEED Channel hired him to host WIND TUNNEL. A show that featured guests, commentary, highlights and phone calls started out nightly then went to Sundays, but it quickly became popular staple because it had something for everyone – at Dave’s insistence.

It was the only place where midgets, sprints, sportscars, drag racers, motocross and flat-trackers were represented. Of course the inside joke at SPEED was the fact Despain had a disdain for NASCAR, yet viewers accused him of favoring stock cars because it was usually a big part of the show since that’s what the audience demanded. If you want to do yourself a favor, go to YouTube and find his rant from 11 years ago because it’s a classic. [ED: We’ll save you the search – it’s here.]

I was fortunate enough to get to work with Dave on WIND TUNNEL. He was gracious enough to let me co-host his show several times in 10 years and it was the best time imaginable.

But what I got to see up close was a master of his profession who didn’t need a teleprompter, yet could read one flawlessly and you’d never know it. His timing was impeccable, and he handled outraged callers with sardonic glee – but was never mean. His chemistry with Kenny Schrader made for good TV, and he loved having Jeff Gordon and Little E on his show because you could tell they loosened up, but he was also proud to introduce his audience to up-and-comers like Brad Keselowski, Antron Brown and Kyle Larson through the years.

Some of his best work was the documentaries he crafted for SPEED on Daytona, Talladega and Chris Economaki, where his writing, reporting and delivery skills were truly on display.

“When Sean McManus was at CBS I seriously thought about suggesting Dave to replace Charles Kuralt,” said Lingner. “He has that commanding presence that’s perfect for 60 Minutes.”

At age 71, the consummate pro says he’s tired of chasing races so this Saturday night in Tulsa on MavTV he’s signing off – hosting the Chili Bowl in his final telecast.

“I’ve been very lucky,” he said from his Georgia home. “I didn’t have to pay a lot of dues and got to cover a lot of cool people and events. Doing the Chili Bowl one last time is a good way to go out.”