Indy Lights race winner Zachary Claman De Melo will look to make his testing debut for Dale Coyne Racing later in the month after a clearance issue arose with the Verizon IndyCar Series.

The French-Canadian driver was in Sebring on Wednesday with DCR and intended to drive Sebastien Bourdais’ No. 18 Honda, but an administrative hurdle raised by the series – his drug test results were not received from the lab – meant clearance to drive was not provided.

“I don’t know what happened; IndyCar says they never got my results from the lab, but now they should have them tomorrow, I was told,” the 19-year-old told RACER. “I’m clean – no worries there – but without the results, I wasn’t able to run. It’s a shame.”

With the anticipated clearance forthcoming, Claman De Melo and DCR are targeting a new date at Sebring. 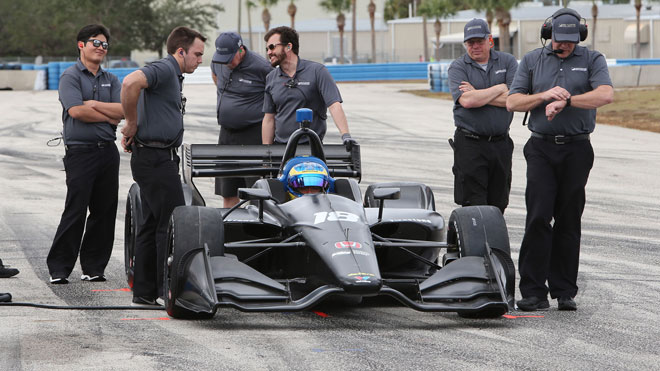 “Seb is meant to be back here on the 24th, so we’re talking about me being there to test the 25th,” he added. “And we’re continuing to talk with Dale in the meantime about racing for the team.”

Veteran racer and driver manager Stefan Johansson has taken over Claman De Melo’s racing affairs and will look to strike a deal with Coyne for as many races as possible in 2018.

As RACER revealed earlier in the week, former Bryan Herta Autosport and A.J. Foyt Racing driver Jack Hawksworth is also in the frame for some races in the No. 19 DCR Honda, which serves as the last open full-time seat on the grid.