Team testing of the new 2018 IndyCar aero kit got underway Tuesday at Sebring International Raceway, with teams permitted five hours of testing per day. Dale Coyne Racing and Andretti Autosport tested their Honda-powered cars Tuesday, with Chip Ganassi Racing joining in on Wednesday. For DCR’s Sebastien Bourdais, however, time in the car was limited by a variety of electrical gremlins.

“New-car problems – new data system, new everything on the car, new aero – just got to work out the kinks of everything,” Bourdais told RACER‘s Marshall Pruett. “The guys did a really good job on the car – everything functions, the dash works, we’re just not really getting values and stuff like that. So it’s just calibration – which unfortunately you can only start working on once you hit the track, hence the extra five hours that we’re getting from IndyCar.”

Bourdais could tell from the laps he did run, though, that there would be a lot of work ahead for him and his team to get the car to his liking. 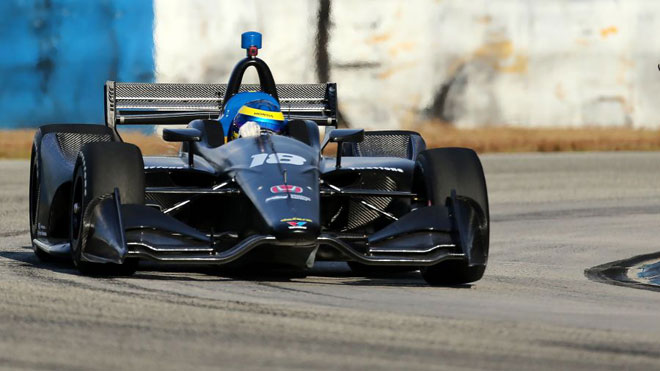 “It’s definitely a very different animal from what we’ve had the last three years. We’re going to have rethink a lot of setups – it’s very rear-ride height sensitive, so as soon as you hit the brakes and the rear gets up you lose a lot of rear downforce and the thing starts moving around. It’s just going to be something different and that’s always an opportunity to rethink and re-invent the wheel. I’ve got Olivier [Boisson] and Craig [Hampson, engineers] thinking and working hard at it, so we’ll find solutions, it’s just going to take a little bit of time.

“Hopefully we get through as much as we can so the next time we hit the track on one of our three private test days, we can really start getting data and start analyzing what’s going on. Because these days, as fine as the cars are, if you don’t get data you know you can rely on, it makes things very difficult. The driver’s feel isn’t really enough – I can only tell them what the car is doing but you need to understand why it’s doing that, and it’s related to the aero map and everything. So it’s going to be exciting, but it’s going to be a lot of work.” 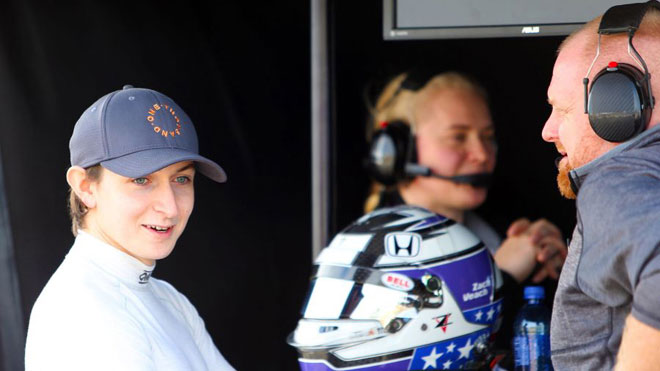 Andretti rookie Zach Veach doesn’t have Bourdais’ considerable IndyCar experience to draw upon in his acclimatization process to the new car, but the Ohio native told RACER‘s Pruett that might be a positive.

“It’s some of the most fun I’ve ever had,” enthused Veach of his first day of running with his new team. “Just being here at Sebring, obviously, but the aero kit, I’m lucky ’cause I’ve got to drive both the older kit and the new but I didn’t have that much time to kind of create habits with the older kit. The car feels like a proper racecar again – it feels much closer to what we had in Indy Lights. The car’s constantly moving under you. On the entry to the corner you find yourself doing two or three little catches before you find the middle and off. It’s a little tough to get used to because the IndyCar breaks away a little quicker than the Lights car, but for everything we wanted to accomplish today, we checked all the boxes and more.

“For me it’s just good to have that data set of what I need to improve on. Luckily I had [Alexander] Rossi running today and he’s extremely quick, so I had an awesome target to shoot towards. This is the first time I really got to run three sets of new tires in a five-hour window on a road course, so I got to understand the new tire process a little bit, and just getting laps in this car as far as understanding the aero kit, how deep these cars can brake again – because compared to the Lights car it’s night and day, a whole marker and a half further into the corner – and the important thing honestly is just slowing everything down. The first outing for me, I was like, “Wow, IndyCars are quick!‘ Mentally we’d been out of a racecar since May, basically, so it takes a few runs for your mind to take 180mph and braking at the 200 mark, just to slow it all down and say, ‘OK, this is nothing new, I know what to expect now.’ It was like being shot out of a cannon that first run, but it was a good cannon to be in!”

At the request of the team, RACER didn’t photograph Veach in his own car, the livery of which will be revealed at a later date, but the driver was eager to relate how much he likes the look his Group One Thousand One sponsors.

“The guys at Group One Thousand One are great to work with, just ’cause they understand making a racecar look good,” the 23-year-old said of the U.S.-based insurance holding company that will back his efforts this year. “Their [color] scheme is going to be new to IndyCar – I think the color combination’s something that we haven’t seen that often. It’s similar to one or two cars but it’s definitely going to stand out. We’re going to have different schemes throughout the year, but I think people are gonna love it. They should – I love it, it’s my favorite car that I’ve had, and that’s not just because it’s an IndyCar!”