Williams chief technical officer Paddy Lowe insists his team did not lose ground to Force India in terms of car performance as much as the 2017 championship standings suggest.

Having been locked in a tight battle with Force India for much of 2016, ultimately losing out on fourth in the constructors’ championship, Williams ended up 104 points adrift last year as Force India easily repeated that result. However, Lowe believes the gap between the two was much closer, with Williams simply not exploiting the full potential of its car on enough occasions.

“At some point attention had to turn to next season’s car and trying to make a big step there,” Lowe told RACER. “I think we’ll find all the midfield teams will say the same thing: ‘Can we put some air between us and the others so that we’re ahead?’ That’s what we’re aiming to do.

“Force India did a great job last year, so great credit to them. If you go and average it all through I think they had a slightly quicker car than us but not much. We were quicker at various times of the year and they were quicker at others, so all credit to them, they’ve actually done a great job to earn the points with that car. We could’ve have done a better job in that respect.”

Having joined Williams from Mercedes last winter, Lowe says he took as much satisfaction from a number of the results with his new team as he did from winning world championships.

“We came fifth in 2016 and I think we hoped to improve upon that, which would mean could we come fourth? We didn’t achieve that, so that’s in one way disappointing. Having said that, we held on to fifth in the face of some pretty intense competition in the midfield. There was not a huge spread in the lap times in that space, so it’s very competitive and very difficult to pull out points every Sunday, as we found. 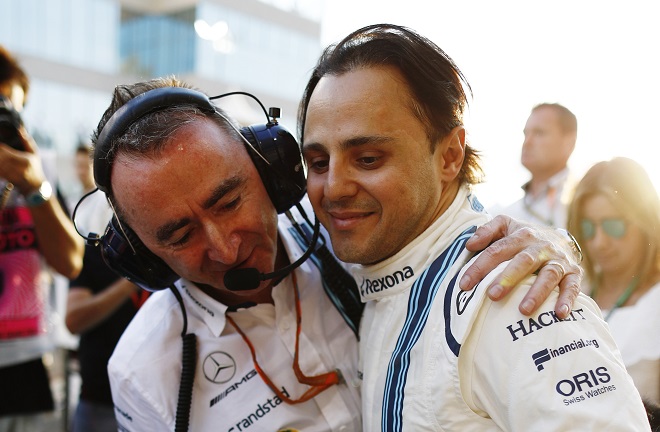 “So it’s mixed feelings from that point of view, but it’s been good fun and the rewards you can get… Just speaking personally, how you can recalibrate. We got a point in Japan with Felipe [Massa, pictured with Lowe, above] in a race with Fernando [Alonso], and also Felipe’s seventh place in Brazil. Those moments were as good as any race win that I’ve ever managed in the past.

“So you calibrate yourself to the environment you’re in and then you work from there and try and move forward. There were some very rewarding moments in the first year but there’s a lot of opportunity, I think is the other main topic. Things that we’ve seen in 2017, ideas we’ve got and things that we need to do for next season.”