Ross Brawn admits he is “conservative” about making any changes to the race weekend format in Formula 1, but says Friday practice is being reviewed.

The race weekend format has often been a point of discussion, with the FIA stating it would review the current schedule as far back as 2015. Liberty Media has also said changes could be made to the weekend as it evaluates ways of expanding the calendar, but Brawn – who is Formula 1’s managing direct of motorsports – doesn’t envisage major changes to either the race or qualifying.

“I’m probably more of a conservative, quite frankly, on the race format,” Brawn (pictured at right, below) told Sky Sports. “I think the length of a grand prix is about right. It’s not too long, it’s not too short – it engages you. We want the grand prix to evolve and have its highlights and come together at the end. I’m not sure that we should be thinking in terms of changing the grand prix length. 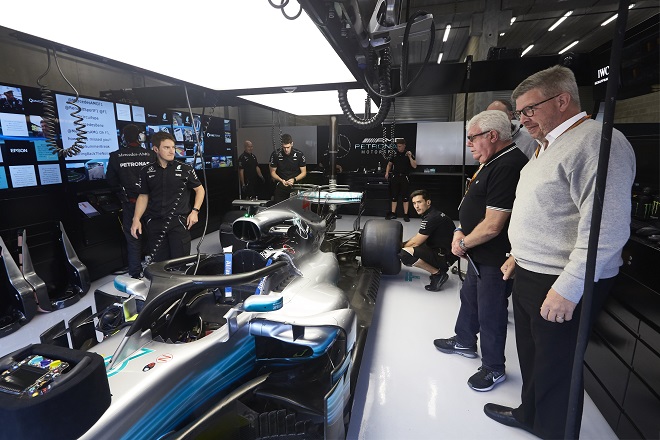 “I think we’ve got other things to enhance grand prix racing rather than changing the format. Qualifying works very well – it’s fairly good. I think practice on a Friday is open to discussion. Whether we need two sessions, whether we can have only one afternoon session. There’s another fact in all of this is the number of races that we have. If we have an increased number of races, do we change the format to put less pressure on the teams to be able to do those races?

Brawn pointed to other racing series as potentially providing a template for F1 to look at.

“Over the race weekend could we do more to allow the fans to get closer to the cars. One proposal is to have an open scrutineering. Cars literally have to go out into a field to be scrutineered so fans can come and see them.

“It used to happen at Le Mans and it was a great event. The cars are lifted up, you can see underneath them. So we’re exploring things in that nature but I’m fairly conservative on the format of racing. We haven’t got any major plans on that front.”