Lando Norris believes championship success in his first year in Formula 2 would mark him out as a better prospect than this year’s champion Charles Leclerc.

Ferrari youngster Leclerc took a dominant title victory driving for Prema in 2017, following on from GP3 success a year ago, and has duly been promoted to a Sauber race seat next season. Norris has won titles in MSA Formula, Formula Renault 2.0 and European F3 over the past three seasons, and will step up to F2 with Carlin, as the team that powered him to the F3 success returns to F2 level after a year out.

With Prema having dominated GP2 in 2016 before Leclerc joined the team as a rookie, Norris – who made his F2 debut in this year’s Abu Dhabi finale (pictured above) – believes success with Carlin next year would be a greater achievement. 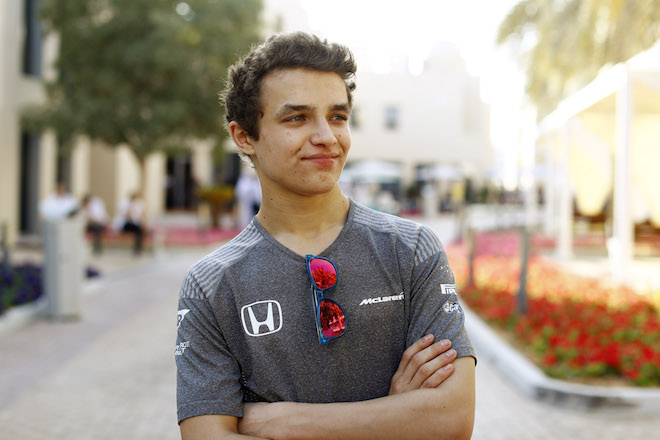 “I would like to win – I think it’s something good to have, but it’s hard to say,” Norris (pictured) said. “If I want to prove that I’m as good as Leclerc or better then I need to win. If I win with Carlin then I’ve probably proved that I’m better, because I’m joining a team which we don’t really know where we are, whereas if we joined Prema at least they have a good baseline to start the year off.

“So I think if I come second or third it’s just as good as winning the championship with Prema, but of course I would like to win. It’s a much tougher category with a lot more variables, basically, and I think that makes it tougher to win as much as I have done in the past.

“Leclerc has proven he can do it and it will definitely be tougher to do with Carlin, but I don’t see any doubt in them being able to be as strong as Prema were by the mid-point or the end of the season.”

With F2 introducing a new car next year, Norris admits the playing field will be leveled slightly across the teams but still sees the Pirelli tires as being a dominating factor.

“I think for everyone it’s a bit of a fresh beginning but tire-wise I think it’s the same. So the fundamentals I think are quite similar. It’s a bit hard to say how much of the setup you can carry over or if you literally need to completely start again. But I think the main thing is the tires are pretty similar, so it’s probably going to be a similar type of setup that you run.”