Hamilton 'wants to keep his options open' over retirement - Wolff

Hamilton 'wants to keep his options open' over retirement - Wolff

Toto Wolff says Lewis Hamilton “wants to keep his options open” when it comes to being able to retire from Formula 1.

Hamilton became a four-time world champion this season and has played down any interest in trying to match Michael Schumacher’s record of seven world titles. The Briton pursues a number of interests outside of F1 and his Mercedes boss admits one part of negotiations over a new contract takes into account the 32-year-old’s desire to be flexible.

“Of course he has it in him to want to be the very best and outscore all the results but equally he is a frei-geist – a free spirit – and he wants to keep his options open whether he stays a racing driver in 2019 or becomes a fashion entrepreneur,” Wolff (pictured with Hamilton at the FIA Prize Giving gala) told the BBC.

Wolff’s comments come with both the team and Hamilton in talks over a new contract, with his current deal set to expire at the end of next season.

“We are in negotiations about a new long-term contract and hopefully Lewis can stay with us for many more years. This is the wish of all the parties. He wants to be with us and we would like to keep him, obviously, but at the same time I think he just needs to have the peace of mind that whatever he decides to do in the future, he can do.

“At the moment, he loves F1 and he doesn’t want to do anything else and all the rest is hobbies – but maybe in two or three or four years down the line, he changes.” 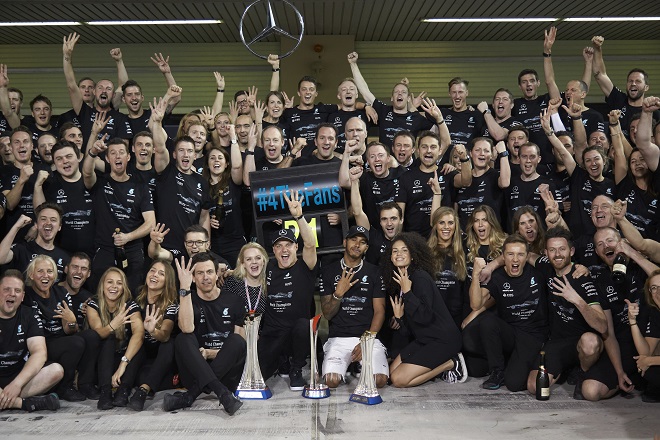 Wolff added that focus will only turn to who will partner Hamilton – with Valtteri Bottas also out of contract at the end of 2018 – once the new season is up and running.

Asked what sort of pairing he wants at Mercedes, Wolff replied: “If you would have asked me the question one year ago I would have said having Lewis and Nico [Rosberg], two drivers who have a strong rivalry and are pushing each other and making the car faster.

“But we have realized that the positive dynamics we had between Valtteri and Lewis, in a difficult season like we had in 2017, was an asset. In so far as I would like the pairing to continue, we are committed to both of them in 2018 but having said that, 2019 is a very exciting new year. There are young drivers that will have gained more experience and some of the very good ones like Daniel [Ricciardo] become free.

“And what we want to see is how the first third of the season pans out – whether our car is good enough and strong enough. This is what we are actually concentrating on and then we will analyze and then take the right decisions, hopefully.”