Covered in ash, hands sore from days of repairs, Charlie Kimball has felt like everything other than a Verizon IndyCar Series driver.

Lost within this week’s big announcement that he’ll join Max Chilton at Carlin Racing in 2018, the Southern California native left the news and celebrations to others as he and the rest of the remarkable Kimball family tended to their fire-ravaged farm.

Kimball’s parents, whose house and accompanying avocado orchard were hit by the wildfires that continue to sweep through the state, received immediate support from their children, extended family, and members of the Verizon IndyCar Series paddock as soon as the need was identified.

Along with his wife Kathleen, Kimball abandoned everything they had planned last week in Indianapolis and flew to Los Angeles, where teamwork has become their daily routine.

“Honestly, the timing for something like this is always terrible. But the timing that Kathleen and I could literally drop everything – bar a couple of rejiggings and apologies to a couple of appearances at PRI – pack a bag, be at the airport in 20 minutes, be on a flight an hour later, and be out here,” he told RACER.

“Now, when we came out, we didn’t think it was going to be quite as bad – honestly we thought we were kind of out of the woods because of the way the wind was blowing. But this Thomas Fire has just rewritten the rule book, a lot like what people went through up in Santa Rosa. It sounds like Cal Fire lost a firefighter down here this morning, and that just makes it so much worse.

“I’m glad that we could do it and be here. Having had the opportunity with all six of us [family members], pulling as one in a singular direction has been extremely rewarding. Up at 5:30 every morning, falling into bed at 10 o’clock at night, sitting around the kitchen table at 6 a.m. to make a plan for the day, everybody’s job-lists.” 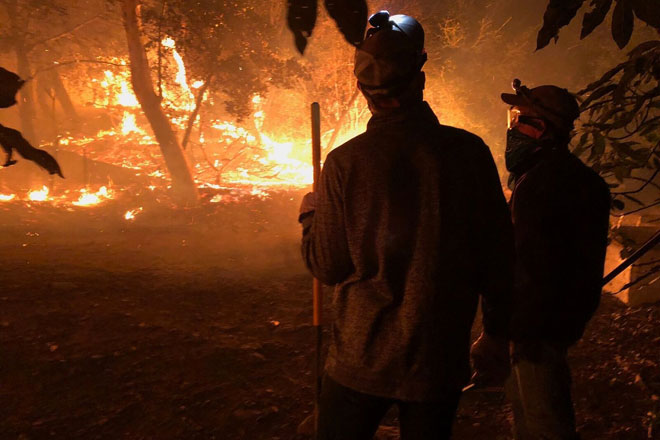 Extensive damage to the property and a loss of both electricity and running water focused the family team on the major priorities to address. Former teammate Graham Rahal, whose team is sponsored by United Rentals, reached out to help, and eventually, the head of communications at the nearby Grand Prix of Long Beach made sure the Kimballs received timely assistance.

“Being able to rely on everyone who’s offered help…one of the things that I’ve said a few times now is that the feeling of love and support and help for Ventura County and this community is much, much bigger than any sense of loss we feel,” he said. 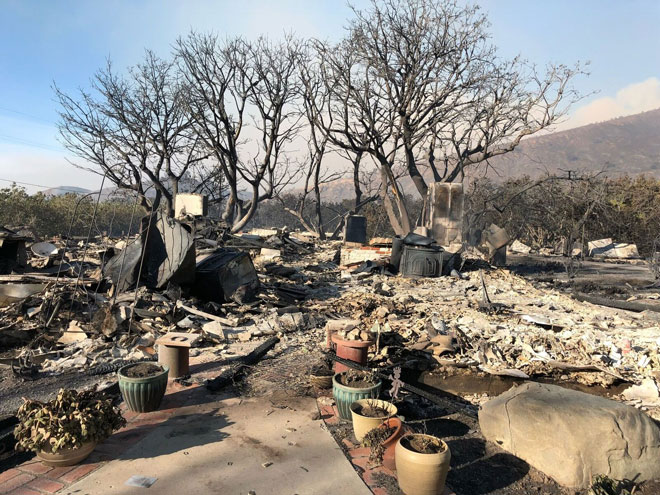 “We suffered significant structural damage to the structures of the ranch. That included my parents’ house, office, garage, barn and storage container, as well as significant losses to the trees and the orchard. We won’t know exactly until we get water back on trees and, honestly, until the new fruit starts setting in May, what the damage to the orchard is. We lost significant amounts of tools, farm equipment, from bin trucks to bin trailers, to tractors, ladders, clippers…

“And the irrigation to the northern half of the orchard suffered significant damage. I had three to four people reach out to to get temporary power – Edison has been hoofing to get power back up, the linemen have been working around the clock, but we couldn’t guarantee when we’d get power back and as soon as we had the irrigation system back up and running we needed to power it, to get the water from the well around to the trees.

“The person who really came through was Chris Esslinger at the Grand Prix of Long Beach – he texted me the contact of the power company they use for the race weekend. I called them and the guy called right back and said, ‘What do you need? When do you need them? How do we get them to you?’ The fire hit the ranch and the house Wednesday night and we had generators first thing Monday morning and were irrigating Monday afternoon. So, when I talk about the support, that’s what I mean. And it’s not limited to just us.”

Like thousands of people at both ends of the state who’ve been forced to find improvised living arrangements, Kimball’s family is dealing with the situation as best they can.

“We’re very fortunate in this county – we have a lot of family, a lot of support systems,” he said. “My parents are displaced and my sister and brother-in-law – my sister’s been the assistant ranch manager here since July, and they just moved back here from England last week. They planned on living at the ranch with my parents, so they’re four people displaced.

“So we’ve been staying at my grandmother’s house and we’ve had so many friends and family just delivering food to her house so that when we came home exhausted at night we didn’t have to figure out going out to dinner. We could sit down and debrief, figure out the hit list for the next day and fuel and eat and get some rest. 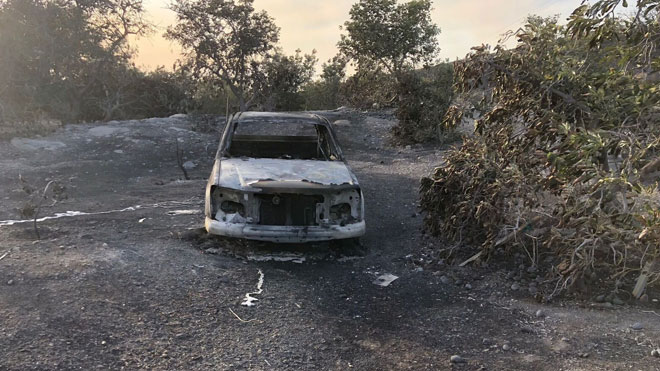 “Honestly we’re very lucky – we have a lot of help. There are a lot of people that can’t afford to miss a day’s work, let alone renter’s insurance, content insurance, and negotiations. And child care because the schools have been closed while they’re trying to figure out living in a shelter and getting to work and replacing their whole lives.”

Selfless and hard-working, Kimball is determined to follow the example set by other athletes who’ve used their will and reach to help others after some of the recent disasters that struck Texas and Florida.

“I was thoroughly impressed by what [NFL player] J.J. Watt did in Houston after the hurricanes,” he said. “Now, I am not as big as J.J. Watt, literally or figuratively, but if I can help this community rebuild [I will]. Because it’s not front page news anymore, right? It’s a week old. But it’s the fourth-largest fire in California history just by acreage, and it’s still burning eight days into this thing. So it’s not over yet, [and] they are talking [only] 15 percent containment. I mean, that’s not a lot for as long as they’ve had to fight it.”

Lending support to a number of local organizations would make a direct impact for those who are less fortunate than the Kimballs.

“The United Way of Ventura County [http://vcunitedway.org/] has been integral in supporting people throughout shelter systems,” he said. “Also the Ventura County Community Fund [https://vccf.org/] … the Amgen Foundation [Amgen is based nearby in Thousand Oaks] has committed $500,000 to the Community Fund and United Way and will match all of their employees’ donations up to another half a million. And finally, the Red Cross [http://www.redcross.org/].”